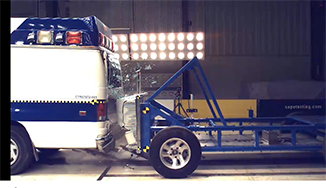 The National Institute for Occupational Safety and Health (NIOSH) released a 7-part video series this week covering new crash test methods to improve ambulance design and keep Emergency Medical Services (EMS) workers and their patients safe in the event of a crash. As a project co-funded by the Department of Homeland Security’s Science and Technology Directorate (DHS S&T), and in partnership with other federal agencies and the ambulance manufacturing industry, NIOSH research contributed to the development of 10 new crash test methods published by the Society of Automotive Engineers (SAE). The release of this video series, which highlights these recently published SAE test methods, demos of crash-tested products, and improvements to the design of ambulance patient compartments, coincides with this year’s National Emergency Medical Services Week.

For EMS workers, wearing a seat belt can be at odds with doing their jobs properly: they need the mobility to reach the patient at all times, collect needed supplies, adjust lighting and temperature, and communicate with their driver and the hospital. This is a significant safety concern. A 10-year review of serious ambulance crashes conducted by the National Highway Traffic Safety Administration found that 84% of EMS workers in the patient compartment were not wearing their seat belts at the time of the crash. From 1992 to 2011 there was an estimated annual average of 1500 injury crashes involving an ambulance, and 2600 injured persons – including both occupants and pedestrians of all vehicles involved in the crash.

“Given the evolution of ambulance design, our research sought to make improvements in seating, patient cots, equipment mounts, storage cabinets, and the overall patient compartment body, leading to the development of new test methods” said James Green, NIOSH lead Project Officer and Safety Engineer. “Working alongside other agencies and industry partners has improved the structural integrity and crash survivability of both the vehicle and the occupant, improving worker safety and security while still allowing them to do their jobs.”

With these new crash test methods, patient compartments in an ambulance can become increasingly crashworthy for both the patient and the worker. In the event of a crash, there is less of a risk of flying objects injuring occupants, cots and seats remain more stable and crash resistant, and EMS workers can engage in seamless patient care while still remaining properly belted in a moving ambulance.

“As part of S&T’s First Responders Group, we hear from responders on the ground about the challenges they are facing.  EMS workers themselves have identified the lack of safety as an issue,” said William Deso, DHS S&T Program Manager for the Department of Homeland Security’s Ambulance Standards Project. “We have been proud to work with NIOSH and other partners in contributing to the development of these 10 new methods.”

The seven videos can be found here: www.cdc.gov/niosh/topics/ems/videos.html

NIOSH is the federal institute that conducts research and makes recommendations for preventing work-related injuries, illnesses, and deaths. For more information about NIOSH visit www.cdc.gov/niosh/.