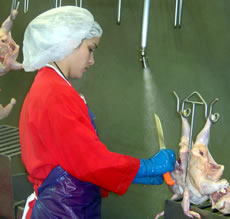 NIOSH’s Health Hazard Evaluation (HHE) Program has responded to a number of requests to evaluate reports of eye and respiratory irritation among workers in poultry slaughter and processing facilities. Symptoms commonly reported in these facilities include stinging or burning eyes, nose, and throat; sneezing or coughing; sore throat; shortness of breath or asthma-like symptoms; headaches; and nausea. During interviews conducted with workers, it has often been reported that such symptoms are intermittent in nature, increasing the difficulty in identifying a specific causative factor. In the past, chlorine use in the facilities’ chiller baths and evisceration lines for anti-microbial treatment of poultry carcasses and equipment sanitation has often been suspected as a culprit. While chlorine may be responsible for some of the symptoms, chlorine-related by-products called chloramines were often implicated as a more likely cause of the irritation symptoms. These by-products are the result of interaction between the chlorine source and nitrogenous material from the poultry.

Poultry slaughter and processing facility managers should be aware of the many contributing factors commonly found in facilities where symptoms are reported. Knowledge of the multi-factorial nature of the issues can allow prompt action to address such symptoms. Investigations conducted by industrial hygienists from both NIOSH and USDA have commonly found the following factors (either alone or in combination) that appeared to have contributed to the irritation symptoms. It is recommended that poultry processing facilities focus on addressing these symptom-contributing factors despite a lack of environmental sampling data for specific contaminants.

Additionally, it is possible that individuals with pre-existing asthma, allergy, or sinus symptoms may experience an aggravation of these symptoms due to the exposure of even trace amounts of airborne chlorine compounds, particularly in high humidity environments. Furthermore, poultry proteins, viscera, fecal material or feathers/dander may also prompt or aggravate allergic reactions in susceptible workers.

In efforts to provide a safe and healthful work environment for their employees, company health and safety representatives can investigate a spectrum of factors that may play a role in complaints of worker health effects. As identified by industrial hygienists from both NIOSH and the U.S. Department of Agriculture, the following list of recommendations for improvements in engineering and process controls may help prevent reports of worker health effects. The identification of a process control manager responsible for consistently reviewing these areas of potential concern may prove beneficial. While many of these factors may play a role in reported health effects, efforts to prevent such effects will require the involvement and commitment by company management to improved occupational safety and health in an equal manner to their commitment to product safety.

Introduction of Chlorine or Other Antimicrobials

Chemical Use as Antimicrobials in Poultry Slaughter and Processing Facilities

As technology moves forward in the industry, the reliance on the use of chlorine compounds for disinfection during slaughtering and processing is decreasing. New disinfection systems using a variety of other antimicrobials besides chlorine (e.g., ozone, bromine compounds, lactic acid, citric acid, chlorine dioxide, and peroxyacetic acid) continue to be approved by the U.S. Department of Agriculture (USDA). As these systems are introduced to the market and implemented by industry facilities, it should be noted that USDA approval of such systems falls under their food safety directive for purposes of killing bacteria. USDA approval does not speak to potential occupational exposure concerns for workers in facilities where such systems are installed and operated. Therefore, safety and health professionals in the industry should be aware of the potential for such occupational exposures and act to prevent such exposures accordingly. While facilities may vary in their use of chlorine or other disinfectants, similarities exist in how facilities can respond to prevent occupational exposures to these chemicals. While past experience has focused on chlorine and chloramines, the steps developed to address the multi-factorial nature of symptoms reported by workers in relation to chlorine or chloramines exposure can be applied in facilities where other disinfectants are used as well.

Integrated air sampling methods for chlorine have been published by both NIOSH and OSHA. However, the use of these available air sampling methods for chlorine in poultry processing facilities has often led to results showing non-detectable concentrations or concentrations well below applicable occupational exposure limits (OELs), despite reports of health symptoms or chlorine-like odors by workers in poultry-processing facilities.

Developing the ability to sample for chloramines has been an area of study for NIOSH scientists for the past several years. As part of this effort, NIOSH investigators adapted a sampling and analytical method for chloramines as reported in the scientific literature by French researchers and used it to attempt chloramine exposure assessments at poultry processing facilities. While the method showed some initial success in assessing correlations between levels of exposure and a variety of reported irritation symptoms, several deficiencies in the method have been encountered. These include a lack of consistency in the limits of detection (LOD) and limits of quantitation (LOQ) between investigations and the inability to produce a laboratory chloramine standard against which lab results can be compared. These limitations have necessitated further research towards a more robust and reliable method for inclusion in the NIOSH Manual of Analytical Methods (NMAM). NIOSH investigators continue to pursue such research as resources permit. Until that time, no valid NIOSH air sampling method for chloramines is available.

As with chloramines, no suitable air sampling methodologies often exist for a number of the other antimicrobial chemicals being introduced on the market for this industry. Additionally, the use of direct reading instruments such as colorimetric detector tubes has been attempted with minimal success in correlating readings with symptoms reported.

Because of the limitations associated with air sampling, it is recommended that facilities in which health effects are reported by workers address the symptom-contributing factors detailed above rather than relying on inconclusive or non-existent industrial hygiene sampling results.