Occupational Exposure Limits (OELs) play a critical role in protecting workers from exposure to dangerous concentrations of hazardous materials [ Schulte et al. 2010 Schulte et al. 2010; Nikfar and Malekirad 2014; Deveau et al. 2015; Skowron and Czerczak 2015 ]. In the absence of an OEL, determining the controls needed to protect workers from chemical exposures can be challenging. According to the Environmental Protection Agency (EPA), the Toxic Substances Control Act (TSCA) Chemical Substance Inventory currently contains over 85,000 chemicals that are commercially available [ EPA 2015 ], yet a quantitative health-based OEL has been developed for only about 1,000 of these chemicals. Furthermore, the rate at which new chemicals are being introduced into commerce significantly outpaces OEL development, creating a need for guidance on thousands of chemicals that lack evidence-based exposure limits [ McKernan and Seaton 2014; Michaels 2014; Zalk and Nelson 2008 ]. Stakeholders should refer to the NIOSH Pocket Guide to Chemical Hazards for the NIOSH Recommend Exposure Limits (RELs) and the OSHA Permissible Exposure Limit (PELs). Additionally, stakeholders can consult the safety data sheet (SDS) for the chemical for OSHA PELs, American Conference of Governmental Industrial Hygienists Threshold Limit Values (TLVs), and other OELs. For chemicals that lack OELs, the NIOSH occupational exposure banding process is designed to create a validated, consistent, and documented approach to characterizing chemical hazards so timely management decisions can be made based on the best available science information [ McKernan and Seaton 2014 ]. While OEBs are not meant to replace OELs, they can be an additional tool for hygienists to use when OELs are not available. 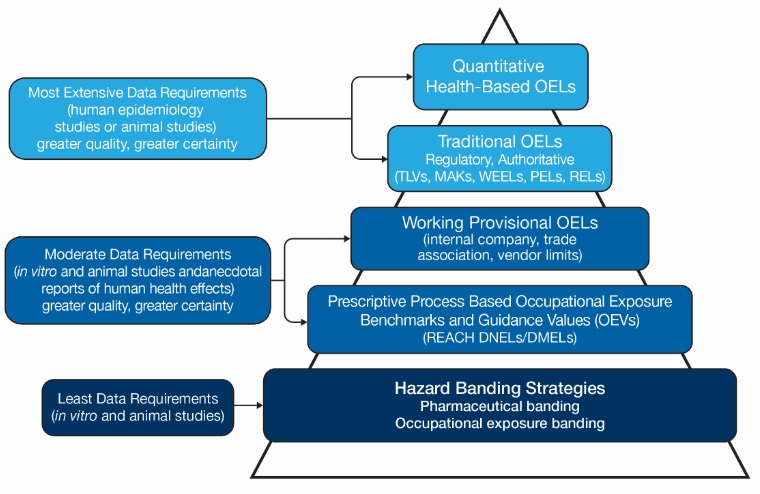 Occupational exposure banding is an important component of the Hierarchy of OELs (Figure 1) [ Deveau et al. 2015; Laszcz-Davis et al. 2014 ]. The Hierarchy of OELs pyramid shows that the most reliable, health-based OELs have the highest data requirements. However, quantitative, health-based data are not always available or accessible, so there are several types of OELs based on the quality and quantity of the information used to derive them. When fewer data are available, hazard banding strategies, such as occupational exposure banding, can be used to develop exposure bands. As more data become available, a prescriptive, process-based OEL can be derived, followed by a working provisional OEL. The most extensive data requirements enable the development of health-based OELs and then, more desirably, development of quantitative health-based OELs. [Deveau et al. 2015 ]. As more toxicological and epidemiological data become available, it is possible to move up the Hierarchy of OELs pyramid.