Controlling exposures to occupational hazards is the fundamental method of protecting workers. Traditionally, a hierarchy of controls has been used as a means of determining how to implement feasible and effective control solutions.

One representation of this hierarchy is as follows: 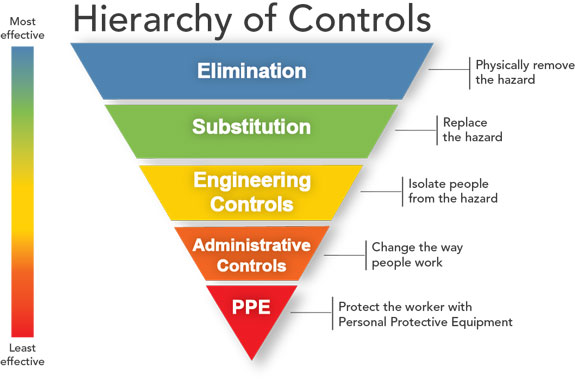 The idea behind this hierarchy is that the control methods at the top of graphic are potentially more effective and protective than those at the bottom. Following this hierarchy normally leads to the implementation of inherently safer systems, where the risk of illness or injury has been substantially reduced.

NIOSH leads a national initiative called Prevention through Design (PtD) to prevent or reduce occupational injuries, illnesses, and fatalities through the inclusion of prevention considerations in all designs that impact workers. Hierarchy of controls is a PtD strategy. To learn more, visit the PtD website.

Elimination and substitution, while most effective at reducing hazards, also tend to be the most difficult to implement in an existing process. If the process is still at the design or development stage, elimination and substitution of hazards may be inexpensive and simple to implement. For an existing process, major changes in equipment and procedures may be required to eliminate or substitute for a hazard.

Engineering controls are favored over administrative and personal protective equipment (PPE) for controlling existing worker exposures in the workplace because they are designed to remove the hazard at the source, before it comes in contact with the worker. Well-designed engineering controls can be highly effective in protecting workers and will typically be independent of worker interactions to provide this high level of protection. The initial cost of engineering controls can be higher than the cost of administrative controls or PPE, but over the longer term, operating costs are frequently lower, and in some instances, can provide a cost savings in other areas of the process.

For descriptions of engineering control technologies researched by NIOSH, and information on the control details and their effectiveness, visit our Engineering Controls Database. The engineering controls contained in the database are beneficial for users who need control solutions to reduce or eliminate worker exposures.

Administrative controls and PPE are frequently used with existing processes where hazards are not particularly well controlled. Administrative controls and PPE programs may be relatively inexpensive to establish but, over the long term, can be very costly to sustain. These methods for protecting workers have also proven to be less effective than other measures, requiring significant effort by the affected workers.