The foundation of NIOSH’s fishing safety program is a strong data collection and analysis capacity following the public health model. Since its formation in 1991, the NIOSH office in Alaska has worked to create comprehensive injury databases on fatal and non-fatal occupational injuries among Alaskan workers. In 2008, the Commercial Fishing Incident Database (CFID) was completed and gave researchers a tool to analyze commercial fishing fatalities nationwide (see sidebar). Analysis of CFID data has allowed NIOSH to research fishing related injuries and fatalities on a regional basis, developing a priority list of the most hazardous fisheries in each region. These data have also been used as the foundation of effective fisheries management and safety policy changes around the U.S.

The Bering Sea/Aleutian Island (BSAI) crab fleet, popularly known as the Deadliest Catch, had a fatality rate of 770/100,000 FTEs in the late 1990’s with an average of 8 fatalities per year during seasons that lasted as few as 4 days. NIOSH identified the main contributing factor of these fatalities as drownings after a vessel capsizing incident. The crab boats would become instable due to overloading of crab pots on their decks.

NIOSH presented the data to the US Coast Guard, who in 1999 instituted the preseason Dockside Stability and Safety Checks Program that checked the crab vessel’s pot load prior to leaving the dock. Like flipping a switch, the fatalities dropped from an average of 8 per year to less than 1 per year between 1999 and today. 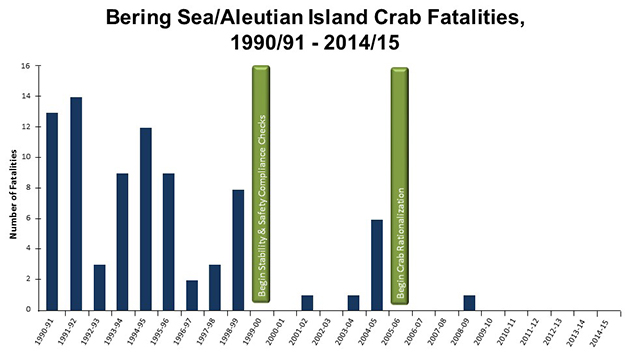 Had these changes not been implemented and the fatality average remained the same, an additional 136 commercial crab fisherman may have perished. By any measure, commercial fishing is still one of the most hazardous occupations in the US with a nationwide fatality rate of 117/100,000 FTEs, but the most deadly fisheries are now found outside of Alaska on the East Coast. The reduction of fatalities in this fishery was heralded as one of the Top 10 Greatest Public Health Achievements of the Last Decade by the CDCCdc-pdf.

Crossing of Hazardous River Bars in WA and OR

Based on NIOSH data published in the MMWR article Commercial Fishing Fatalities – California, Oregon, and Washington, 2000-2006, the US Coast Guard developed a Notice of Proposed Rulemaking for the Washington and Oregon Coasts regarding improved safety procedures for crossing hazardous bars. These rules were implemented in December of 2009.

In 2006, the United States Coast Guard (USCG) implemented a new safety policy intervention for two fleets of freezer-trawlers and freezer-longliners in Alaska. The Alternate Compliance and Safety Agreement (ACSA) set standards for vessel stability, watertight integrity, hull condition, and other critical vessel components. NIOSH conducted an analysis of vessel causalities during 2003-2012 to determine if ACSA has been an effective primary prevention intervention for improving safety in the fishing industry. The study found that on both types of vessels, reported rates of serious vessel casualties decreased after the vessels reached compliance with ACSA requirements, suggesting that ACSA has had a positive effect on vessel safety in the freezer-trawl and freezer-longline fleets.

The objective of this study was to systematically assess whether safety improvements had occurred after quota-based management systems were established in the Alaskan halibut/sablefish and pollock fisheries. Safety improvements were measured by identifying declines in fatalities and search and rescue missions for the halibut/sablefish fisheries and declines in non-fatal injuries in the Bering Sea Aleutian Island pollock fishery. The results showed a statistically significant decline in rates of fatalities and search and rescue missions for halibut/sablefish fishermen after implementation of Individual Fishing Quotas. There was also a significant decline in non-fatal injury rates among factory trawler vessels participating in the pollock fishery, however, this decline occurred pre-implementation of the American Fisheries Act.

Partnership with the UN

NIOSH has coordinated with the Food and Agricultural Organization of the United Nations to study these types of policies around the world. The FAO/NIOSH International Study on Fishing Management Regimes and their Impacts on Fishing Safety examined the relationship between safety at sea and fisheries management practices in order to provide practical guidelines for fisheries managers on how to help make commercial fishing safer. This study included both case studies from around the world and expert consultation. For more details, please refer to the Report of the Expert Consultation on Best Practices for Safety at Sea in the Fisheries SectorExternal.

NIOSHTIC-2 Search of Commercial Fishing Publications
NIOSHTIC-2 is a searchable bibliographic database of occupational safety and health publications, documents, grant reports, and journal articles supported in whole or in part by the NIOSH.