Commercial Fishing Safety in the Gulf of Mexico

In 2009, NIOSH completed an in-depth study of commercial fishing fatalities in the United States for the decade spanning 2000-2009. The purpose of the study was to identify the most hazardous fisheries around the country and to describe the unique safety issues in each. For this study the US was divided into four fishing regions: Alaska, West Coast, East Coast, and the Gulf of Mexico. The results of this analysis for the Gulf of Mexico region can be found in the document Fatal Occupational Injuries in the U.S. Commercial Fishing Industry: Risk Factors and Recommendations / Gulf of Mexico Region.

During 2000-2009, 116 commercial fishing deaths occurred in the Gulf of Mexico, an average of 12 per year for the decade (Fig. 1). Each of the last four years of the decade had fewer deaths than the ten year average, although it is unclear if the decrease was a result of lower risk or simply fewer fishermen exposed.

The Gulf of Mexico is the only fishing region of the US that had more fatalities caused by falls overboard than by vessel disasters. Almost half (46%) of the total deaths were caused by falls overboard. The Gulf of Mexico also had the highest percentage of fatalities due to traumatic injuries sustained on-board. Entanglement in fishing gear caused six (40%) of the on-board injuries, of which three involved deck winches.

Fatalities occurred in 14 different fisheries in the Gulf of Mexico, but only five had three or more fatalities. The shrimp fishery experienced the highest number of occupational deaths with 55 fatalities. Falls overboard caused the most deaths among shrimp fishermen (29, 53%). On-board injuries were the second leading cause in this fishery (12, 22%). 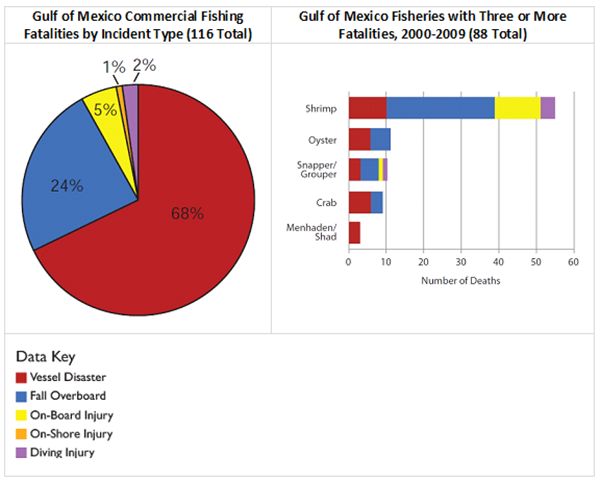 For more information on the recommendations below, please refer to the NIOSH document Fatal Occupational Injuries in the U.S. Commercial Fishing Industry: Risk Factors and Recommendations / Gulf of Mexico Region.

Research Highlights in the Gulf of Mexico