In 2009, NIOSH completed an in-depth study of commercial fishing fatalities in the United States for the decade spanning 2000-2009. The purpose of the study was to identify the most hazardous fisheries around the country and to describe the unique safety issues in each. For this study the US was divided into four fishing regions: Alaska, West Coast, East Coast, and the Gulf of Mexico. The results of this analysis for the East Coast region can be found in the document Fatal Occupational Injuries in the U.S. Commercial Fishing Industry: Risk Factors and Recommendations / East Coast Region.

During 2000-2009, 165 commercial fishing deaths occurred off the East Coast of the US, an average of 17 per year. During 2002, the number of fatalities was unusually low, with only three deaths. No explanation for the single-year decrease has been identified. 2009 was an especially tragic year with 29 fatalities.

About 60% of the total deaths were caused by drowning following a vessel disaster (e.g. sinking, capsizing, fire, etc.) in which the crew was forced to abandon ship. About one-quarter (22%) of fatalities were the result of falls overboard. 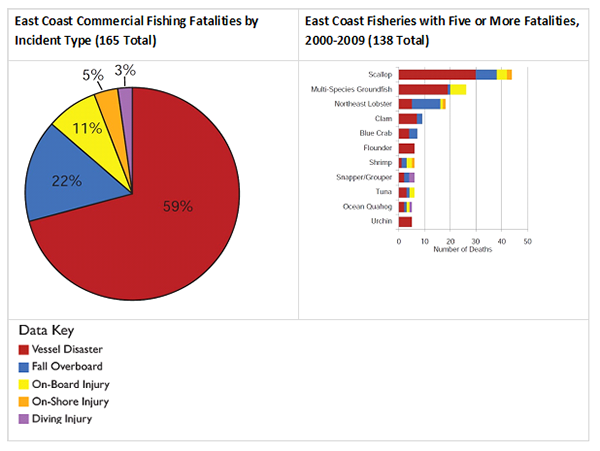 During 2010–2014, 22 crewmembers died from drowning after falling overboard, contributing to 37% of fatalities in the region. None of the fishermen were wearing a personal flotation device (PFD) when they drowned. In 12 (55%) of these cases, the falls overboard were not witnessed, either because the fishermen were alone on the vessel (7) or alone on deck (5). Of the falls overboard for which causes were known, four (36%) were caused by gear entanglements.

Of the seven crewmembers who died from injuries sustained onboard vessels, two were due to unintentional drug overdoses and one was a suicide. The remaining onboard fatalities involved two crewmembers becoming entangled in equipment, one being struck by equipment, and one who suffered multiple fatal injuries after his vessel collided with a channel marker.