NIOSH has been researching commercial fishing safety in Alaska since the early 1990’s. Alaska’s commercial fishermen work in one of the world’s harshest environments and experience conditions that have a strong impact on their safety. One-third (346) of all work-related deaths that took place in Alaska during 1990-2008 occurred to fishermen. This results in an annual fatality rate that is 26 times greater than the rate for all U.S. workers (129 and 4 per 100,000 workers per year, respectively). While the work-related fatality rate for commercial fishermen in Alaska is still very high, it has decreased by 42 percent since the early 1990s. Safety improvements in Alaska occurred as a result of a combination of activities including safety regulations, and fishery-specific interventions focusing on unique hazards of each fishery.

In 2009, NIOSH completed an in-depth study of commercial fishing fatalities in the United States for the decade spanning 2000-2009. The purpose of the study was to identify the most hazardous fisheries around the country and to describe the unique safety issues in each. For this study the US was divided into four fishing regions: Alaska, West Coast, East Coast, and the Gulf of Mexico. The results of this analysis for the Alaska region can be found in the document Fatal Occupational Injuries in the U.S. Commercial Fishing Industry: Risk Factors and Recommendations / Alaska Region.

During the decade of 2000-2009, 133 commercial fishermen died while working in Alaskan waters. The fewest fatalities occurred in 2000 and 2009, with eight occupational deaths in each of those years.

On average for the decade, 13 fishermen were killed per year. Half of the deaths were caused by drowning following vessel disasters (e.g. sinking, capsizing, fire, etc.) in which the crew was forced to abandon ship. Another 31% of fatalities were the result of falls overboard. 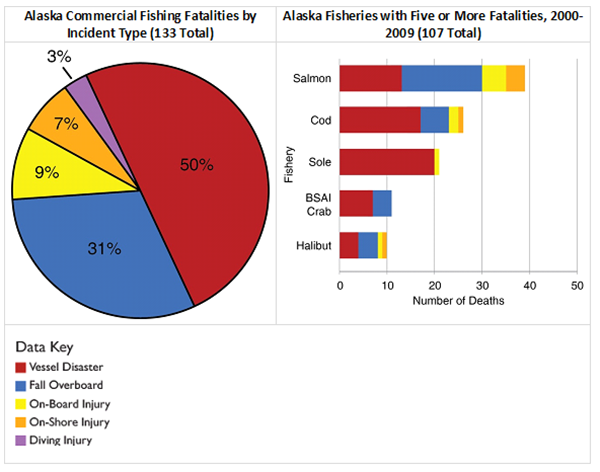 For more information on the recommendations below, please refer to the NIOSH document Commercial Fishing Fatality Summary / Alaska Region.

An analysis of fatalities among Bering Sea Aleutian crab fishermen

Development of an emergency stop (E-Stop) for capstan deck winches