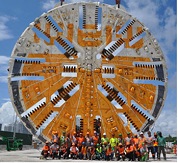 Courtesy of Port of Miami

During 1971-1973, a tunnel job in Milwaukee that used pressures to 36 psi resulted in a very high level of dysbaric osteonecrosis among workers. This is an illness that causes part of the bone tissue to die. Because of this incident, NIOSH requested that the Undersea Medical Society complete two workshops to see if interim decompression tables could be developed. Computer–generated staged tables (Autodec III) were developed using 15 years of commercial diving data. With the help of a NIOSH contract, these tables were tested in 1980. Testing found the tables were inadequate and too lengthy to be commercially useful.1

A NIOSH contract was later awarded to Eric Kindwall to develop new staged decompression tables. Kindwall developed a variant of the Autodec III tables that incorporated the use of oxygen. Using oxygen shortened the decompression times from 10 hours 46 minutes to a more commercially acceptable length of 3 hours 21 minutes. These tables, known as the Edel-Kindwall Caisson Tables, underwent lab and field testing. There was no evidence of DCS or dysbaric osteonecrosis among those workers who tested the tables at six months follow-up. These tables remain the only decompression tables to have been both lab and field tested.

Many modern projects require greater pressures. The maximum worksite pressure allowed by the OSHA Tables is 50 psi. This is also equivalent to ~4.4 bar gauge. The giant Tunnel Boring Machine, shown above, allows projects to be undertaken at greater depths or with unstable soil conditions that exceed 50 psi. One example is a project at Lake Mead, Nevada that may use pressure up to 200 psi (14.8 bar gauge).

Though efforts have been made to develop improved decompression tables, even the Edel-Kindwall Caisson Tables require improvements. Additional research is needed to develop tables that will allow for tunneling at depths that require over 50 psi.