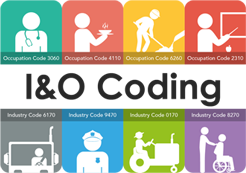 NIOSH offers consultation for industry and occupation coding to researchers and coders for their specific coding projects. To request help or learn more about NIOCCS, please contact the NIOCCS Support Team in one of three ways:

Many data sets contain narrative text for industry and occupation, including:

The collection of industry and occupation (I&O) information serves many purposes:

This type of information can be used by public health workers, industrial organizations, employers, healthcare providers and others to provide the best possible hazard abatement and control, and safety and health programs for workers.

Both the industrial and occupational classification systems for Census 2000 were changed compared to the ones used for the 1990 Census.

Industry: The international policy committee that designed the NAICS set out to create a new classification system rather than simply revise the Standard Industrial Classification (SIC) used prior to 1997. The NAICS expanded the SIC to include industries in Canada and Mexico with those in the United States, and changed the numbering scheme from a 4-digit to a 6-digit system. In spite of these changes, the structure of the 1997 NAICS is not drastically different from the structure of the Standard Industrial Classification for most NAICS sectors. Therefore, crosswalks between the 1990 Census (which was based on the SIC) to the Census 2000 industry classification (which is based on the NAICS) through the two standards is fairly straightforward.

Occupation: The federal interagency SOC Revision Policy Committee (SOCRPC) decided similarly to rearrange the entire structure of the standard occupational classification rather than to start with the old SOC and simply try to make improvements, resulting in major changes. Analysis of occupational data across time will, as a consequence, be much more challenging.

In 2002, all Census codes were modified from 3-digit codes to 4-digit codes.