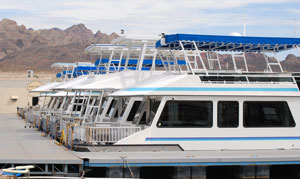 Initial investigations conducted by NIOSH industrial hygienists and engineers showed very high concentrations of CO on and around houseboats using gasoline-powered generators. Following these investigations, NIOSH worked with major houseboat and generator manufacturers to evaluate novel engineering controls to reduce CO concentrations in occupied areas on houseboats. This work led to collaborations with external partners to evaluate new engineering technologies designed to reduce CO poisonings on many other types of recreational boats (including ski boats and express cruisers). Since the start of this project, new catalyst-based low CO emission generators and stern-drive engines have been developed by manufacturers to help address this issue. This work has been conducted since 2002 under a continuing Interagency Agreement with the U.S. Coast Guard.

This work has been supported by the following partners:

NIOSH has shown that CO concentrations from gasoline powered generators on houseboats can reach dangerous concentrations. CO measured in the exhaust and near the rear of boats has often exceeded the Immediately Dangerous to Life or Health (IDLH) value of 1200 parts per million (ppm). These uncontrolled generators routinely emitted CO at concentrations well above the IDLH and concentrations exceeding the NIOSH workplace ceiling limit of 200 ppm. Approximately 11 in-depth technical evaluations of two types of engineering controls occurred over a ten-year period: 1) a generator exhaust stack that reroutes emissions from the water line to well above the upper deck of the houseboat; and 2) and engine emission controls (fuel injection and catalysts) that reduced CO at the source before being exhausted. Both engineering controls effectively reduced exposures by over 98%, to safe concentrations in potentially occupied areas of the houseboat. And beginning in 2012, the National Park ServiceCdc-pdfExternal required that all concession rental vessels with gasoline-powered generators be retrofitted with vertical exhaust stacks or use another CO reduction method such as installing low CO emission generators.

In addition, NIOSH conducted CO evaluations on express cruisers (cabin cruisers) and ski boats to investigate emissions and exposures from propulsion engines and generators. Low emission technologies were available for onboard generators (same as for houseboats) and prototype catalytic converters for propulsion engines. Due to these efforts, boating engine emission standards and regulations have been written which will likely reduce boating-related CO deaths.