Inside NIOSH:
Noise-related Health Risk Varies by Industry and Occupation 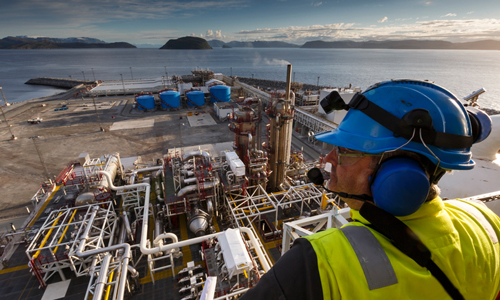 A NIOSH study found that high blood pressure and high cholesterol are more common among workers exposed to loud noise at work. Photo from Getty Images.

High blood pressure and high cholesterol are more common among workers exposed to loud noise at work, according to a NIOSH study published in the American Journal of Industrial Medicineexternal icon.

Researchers at NIOSH also found that a quarter of U.S. workers–an estimated 41 million people–reported a history of noise exposure at work.

High blood pressure and high LDL cholesterol are key risk factors for heart disease, the leading cause of death for both men and women. Loud noise is one of the most common workplace hazards in the United States affecting about 22 million workers each year. 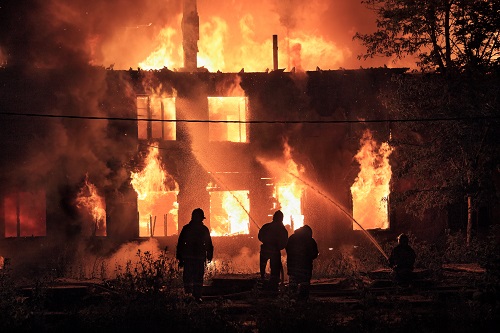 Strains and sprains, and other nonfatal injuries frequently occur among firefighters, highlighting the need for additional prevention research. Photo from Getty Images.

Firefighters continue to experience frequent nonfatal injuries, especially strains and sprains, according to a NIOSH study of injuries treated in U.S. emergency departments published in the American Journal of Preventive Medicineexternal icon.

Firefighting is an undeniably dangerous job where work can often lead to injury and death. Previous studies have investigated firefighter injuries, but these studies have been limited to individual departments, small groups of departments, or subsets within the firefighter workforce (e.g., wildland firefighter). The NIOSH study used a nationally representative sample of emergency departments to further our understanding of nonfatal injuries among firefighters.

These findings highlight the importance of additional research and prevention needs in the areas of lifting techniques and body posture and movements. The next step for NIOSH is to use NEISS-Work to conduct follow-back surveys of injured firefighters to gather more details about their injuries and exposures. The information will be used to determine common injuries and exposures, assist in identifying subsets of the firefighting population who are at most risk for occupational injuries and exposures, and identify circumstances and activities that put firefighters at risk. These incident and circumstance details collected directly from firefighters are critical to better understanding and addressing health and safety challenges of this workforce.

The NIOSH Total Worker Health® Program looks for ways organizations can improve worker health and well-being, on and off the job. One aspect of home that overlaps into work is sleep. Healthy sleep is essential for worker safety and well-being, especially for work, such as construction, that requires following many safety procedures. Knowing how lack of sleep affects safety behaviors, as well as how to design effective organizational-level interventions, can improve worker health and safety.

To investigate this further, a NIOSH-supported study at the Oregon Health Sciences University Healthy Workforce Centerexternal icon, in Portland, looked at the relationship between self-reported sleep and lapses in attention, memory, and action at work that impact safety. Researchers referred to these lapses as cognitive, or thought, failures. Sleep behavior included quantity, or duration, and quality, which is the feeling of being rested, and the ability to fall asleep and stay asleep. To better understand how these factors relate, the study looked at workers’ sleep quantity and quality and workplace safety behaviors, including participation in safety procedures, as well as reports of minor injuries, such as cuts, bruises, or sprains requiring first aid or no treatment, that did not require workers to miss work.

The study used information from three surveys conducted in 2012-2013, completed by more than 318 construction workers at two public works agencies at the beginning of the study, and repeated 6 months and 12 months later. Results suggest that workers with more insomnia symptoms are less likely to follow required and voluntary safety behaviors and are at higher risk for minor workplace injuries due to cognitive failures. The researchers defined insomnia as taking 30-plus minutes to fall asleep or waking in the middle of the night or early morning. In addition, workers who reported not feeling well-rested upon waking on average also reported that they were less likely to follow safety procedures.

These results indicate that organizations can improve safety with tools to reduce insomnia symptoms and improve sleep. The study was recently published by the Journal of Occupational Health Psychology.

The next steps for the researchers include studying how to reduce workers’ insomnia symptoms, improving their ability to fall and stay asleep, and how sleep influences day-to-day safety behavior and more serious workplace injuries. 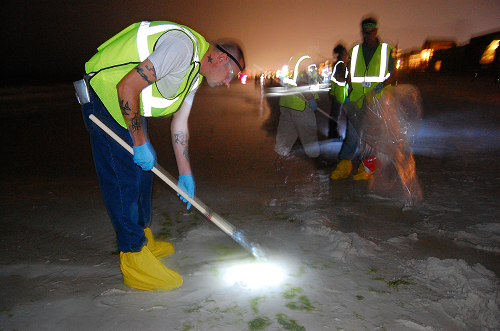 More than 8 years ago, one of the largest oil spills in U.S. history killed 11 oil rig workers and dumped more than 3 million barrels of oil into the Gulf of Mexico. Cleanup efforts have continued since April 2010, when the Deepwater Horizon oil rig exploded and sank. The Gulf oil spill affected hundreds of miles of coastline, and researchers are now working to understand the full extent of the chemical exposures to the thousands of workers who were cleaning this area.

The answer may be through a statistical method called “kriging,” which combines geographic information with known values in a computer model to estimate unknown values. In a NIOSH-funded study at the University of California, Los Angeles (UCLA), researchers applied a form of this method, called “Bayesian coastline kriging,” to estimate chemical exposures along the entire Gulf Coast during the 2010 oil spill. Bayesian predictions rely upon past knowledge to make reasonable estimates about what might occur.

First, researchers validated their approach by creating three computer test models, using Bayesian coastline kriging with simulated, or computer-generated, information for the Gulf Coast. Then, using real geographic information for the Gulf Coast, the researchers plotted the coastline and combined this information with the results of 60 actual air samples from an onsite study at the time of the oil spill. The National Institute of Environmental Health Sciences collected air samples from Waveland Beach, Mississippi between September and December 2010 as part of the Gulf Long-term Follow-up Study.

Next, the UCLA researchers developed a computer model, estimating the chemical levels for areas that lacked real-time measurements from the time of the oil spill. To test the accuracy of these estimates, they then compared them to the results of other statistical methods. Compared to the other statistical methods, Bayesian coastline kriging more accurately estimated chemical exposures along the entire Gulf Coast, according to a recent paper published in the Annals of Work Exposures and Healthexternal icon.

According to the researchers, these findings show that this method can help estimate past chemical exposures from the oil spill along the coastline. In turn, these exposure estimates could uncover potential health effects related to the oil spill. However, they caution that the study focused only on chemical exposure among workers involved in cleanup efforts, not among people living in affected coastal communities. Accordingly, the researchers now are considering expanding the project to include chemical measurements in these communities.