Inside NIOSH:
Lung Transplants on Rise for Black Lung Disease 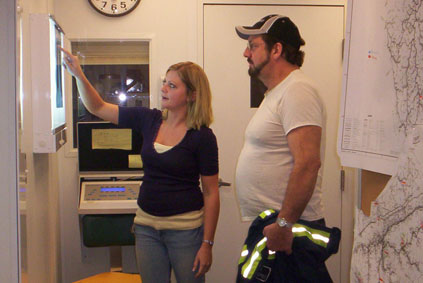 An x-ray technician explaining the basics of a chest x-ray to a coal miner in Harlan County, Kentucky, as part of the Enhanced Coal Workers' Health Surveillance Program. Photo from NIOSH.

The number and rate of lung transplants for black lung disease is increasing, according to a NIOSH study in the American Journal of Industrial Medicineexternal icon. This increase mirrors the rising prevalence of black lung disease among coal miners in Appalachia.

Black lung disease, or coal workers’ pneumoconiosis, is caused by inhalation of coal mine dust. The scarring that results can impair breathing and, in some cases, lead to death. Black lung disease is irreversible and incurable, but it is completely preventable through control of coal mine dust exposure. For some miners with severe disease, a lung transplant is needed.

These findings highlight the critical need for preventing black lung disease through exposure control and early disease identification through medical monitoring programs like the NIOSH Coal Workers’ Health Surveillance Program, which provides chest x-rays at no cost to coal miners.

The “Safety Triangle”: A Useful, Yet Complicated, Theory

Occupational safety and health specialists study past work-related illnesses and injuries to understand how to prevent future ones. More than 80 years ago, the occupational safety and health pioneer Herbert Heinrich used this approach to devise the so-called “safety triangle.” After questions arose about the safety triangle’s validity, a NIOSH study found that the safety triangle is a useful, yet complicated, theory when considering how to prevent severe work-related injuries. In the sections below, lead author Patrick Yorio, Ph.D., NIOSH statistician, explains the study, which was published in the journal Risk Analysisexternal icon. 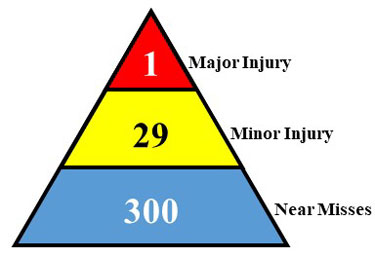 A NIOSH study of the Heinrich safety triangle, pictured above, found that lower-severity events within a mine can help predict a future fatal event within the same mine. Image from NIOSH.

Our study aimed to find out whether or not the ideas found within the safety triangle are valid. Specifically, we first wanted to understand if near misses and less severe work-related injuries affect the number of work-related fatalities that occur over time in mining establishments. Secondly, we sought to examine if the probability of future work-related fatalities decreases as the severity of near misses and minor injuries decreases—thereby taking on the safety triangle form.

Q: How did you measure these effects?
A: We used records from two databases that the Mining Safety and Health Administration (MSHA) makes publicly available to create a third database addressing our research questions. We included 27,446 establishments over the 13 years from 2000 through 2012. Most of these mines were sand and gravel mines, followed by stone, coal, and nonmetal and metal mines. With this information, we were able to calculate the probability of a work-related fatality due to the previous number of near misses and less severe injuries.

Q: What did you learn?
A: Our results showed that lower-severity events within a mine may be used to predict a future fatal event within the same mine. Further, there is validity to the safety triangle in mining, although it depends upon the definition of injury severity. Specifically, we found that the safety triangle exists, but not for all approaches used to define severity levels. Severity metrics linked to the number of days lost due to work-related injuries produced a systematic decline in the effect as severity decreased. But, that was not the case when defining severity based on MSHA’s predefined categories of severity.

Massachusetts workers died of opioid overdoses at vastly different rates depending upon their job. The highest rates were seen in construction and extraction, including quarrying, mining, and oil and gas removal, according to a CDC-funded studypdf iconexternal icon by the Massachusetts Department of Public Health.

To understand which industries and occupations have the highest rate of opioid-related deaths, investigators looked at 4,302 publicly available death certificates filed in Massachusetts from 2011 through 2015. They also used data from four national surveys to explore occupational factors that may contribute to differences in rates of opioid-related deaths among workers in different occupations and industries.

After construction and extraction, the agriculture, forestry, and fishing occupations had the second highest rate of death from opioids. Although the number (61) of opioid-related deaths was fewer than in construction, the rate was 143.9, which was more than 5 times the average rate for all Massachusetts workers. Among those who died in agriculture, forestry, and fishing, 74% had worked in fishing occupations.

Similarly, several other occupations had much higher than average rates of opioid-related deaths:

The study also found differences by gender. Overall, most of the opioid-related deaths were among males, which is similar to findings for all opioid-related overdose deaths in Massachusetts. The rate was highest among male workers in agriculture, forestry, and fishing (205.9), followed by male workers in construction and extraction (152.3) and in material moving (71.9), as compared with the average rate for Massachusetts male workers (38.2). Among females, healthcare support (30.1) and food preparation and serving (28.9) were the two occupations with much higher rates than the Massachusetts average for female workers (11.6).

The rate of opioid-related overdose deaths was higher among workers employed in industries and occupations that have high rates of work-related injuries and illness based on data from the Bureau of Labor Statistic Survey of Occupational Injuries and Illnesses. This finding is consistent with previous research documenting common use of prescribed opioids for management of pain following work-related injury. The rate of fatal opioid overdose was also higher among workers employed in occupations with lower availability of paid sick leave (data from the Bureau of Labor Statistics Employee Benefits Survey) and high job insecurity, or the worry of becoming unemployed (data from the National Health Interview Survey).

Although more research is needed to understand how injury, job insecurity, paid sick leave, and other work factors may contribute to opioid overdose deaths, this study’s findings highlight the critical need for immediate interventions. For example, educational programs and policies targeted toward occupations with a high rate of fatal opioid overdose should aim to decrease workplace hazards that could cause injury resulting in opioid prescriptions. Other critical steps include post-injury pain management with safer practices for prescribing opioids, overdose prevention education, and effective treatment for opioid use disorders among workers.

As anyone who has tried to change careers knows, it can be difficult. In medicine and other fields that require years of education and training, fitting additional courses into a busy work schedule may make a career change especially daunting.

But does this type of program work? According to a NIOSH-funded pilot study at Perelman School of Medicine at the University of Pennsylvania in Philadelphia, the answer is “yes.”

Throughout the 2-year program, participants trained at clinical sites located at their current workplaces, according to the study published in the Journal of Graduate Medical Educationexternal icon. In addition, all participants completed 18 visits to the primary training site at the University of Pennsylvania. Participants received skills training that centered on patient visits, or rotations. They also completed individual projects with a mentor’s guidance. Throughout the program, faculty periodically visited and appraised the various train-in-place locations.

Between 1997 and 2015, 109 out of 110 midcareer doctors graduated from the program, scored competitively on the occupational medicine certifying examination, and achieved all training milestones. Overall, study participants said that they were satisfied with the level of training, giving it a 4.79 rating out of 5. Five years after graduation, most participants continue to practice occupational and environmental medicine throughout all regions of the United States, including the Northeast, Midwest, Southeast, West, Southwest, and Hawaii and Puerto Rico. In addition to geographical diversity, work settings varied with program graduates joining academia, industry, and government, as well as hospitals and other clinical care centers.

These findings show that train-in-place programs can help increase the number of specialists in occupational and environmental medicine by overcoming some of the barriers faced by midcareer doctors seeking a career change. Next, it is important to know if this type of program can be replicated in different locations and to see how its long-term results compared with those of traditional training programs.