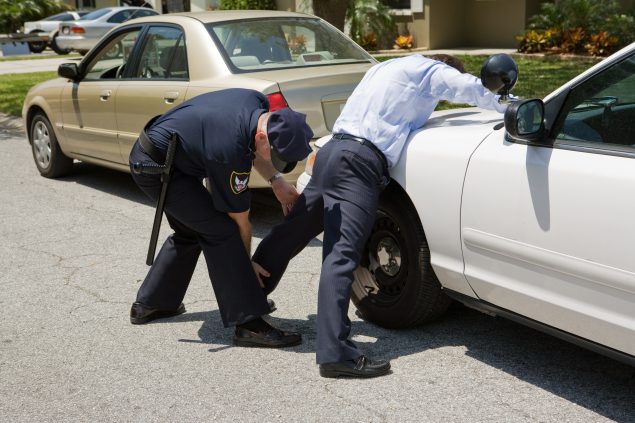 A NIOSH study found that needlestick and related injuries were most likely to occur when police officers performed pat-down, property, and vehicle searches. iStock/Getty Images Plus

Police work can pose many dangers, including work-related exposure to blood and other potentially infectious body substances through needlestick and other related injuries. But when and how do these kinds of injuries occur?

A recently published NIOSH study in the American Journal of Infection Controlexternal icon found that needlestick injuries and other exposures to body substances in one city police department were infrequent but most likely to occur during pat-down and personal property searches. The research also appeared in a NIOSH Health Hazard Evaluations (HHE) reportpdf icon. Investigators looked at police department injury reports in a large city in Ohio, in response to a request from the city’s risk management office through the NIOSH HHE program. The police department comprised approximately 1,000 sworn police offers and 125 civilian workers. Using information from a large database within the city’s safety department, the investigators described the type of needlestick injuries and other exposures from January 1, 2011, to December 31, 2016, and calculated how often they occurred per year.

Results showed that 13 needlestick injuries occurred during the 6 years studied. These injuries were most likely to occur when the police officers were performing pat-down, property, and vehicle searches. Nine out of 11 people searched or otherwise involved in these events tested positive for the hepatitis C virus upon subsequent evaluation. In addition to injuries from needles, 37 additional body substance exposures occurred from spitting, human bites, and other forms of exposure to blood. None of the police officers were reported to be infected by viruses transmitted by blood.

A recent study of 1,334 workers from 20 mine sites found that miners who avoid risk were less likely to experience near-miss incidents, according to a paper published in the Journal of Loss Prevention in the Process Industriesexternal icon.

Why is it important to know about near-miss incidents? Previous NIOSH research showed that the likelihood of future injury may increase with the number of near misses. A near miss, otherwise known as a “close call,” is an occurrence that could have caused harm but did not. In high-risk occupations, near-miss incidents must be reported. Risk management, including near-miss reporting, serves as an integral part of workplace safety and health, particularly in hazardous industries such as mining and chemical processing.

Near-miss reports do not necessarily reveal the role that workers’ attitudes play in risk-related behavior. To understand this relationship, NIOSH researchers recently surveyed mine workers to compare their attitudes towards risks and their feelings of personal control over events—defined as “locus of control”—with their individual likelihood of risk avoidance. Researchers found a strong relationship between near misses and attitudes toward risk and locus of control.

Based on published studies, researchers developed a survey of specific attitudes toward safety and health. The survey included statements such as whether or not workers put safety first and prefer to avoid risks, or whether they consider themselves regular risk-takers. Respondents were asked to rate these statements from 1 to 6 on the commonly used Likert scale. In addition, respondents reported their frequency of experiencing near miss incidents in the preceding 6 months, and the researchers confirmed near misses with mining company reports. Most respondents were males and ranged in age from 18 to 54. The in-person surveys occurred between April 2015 and April 2017.

With each one-point increase, the likelihood of having experienced a near miss in the previous six months dropped by 30%. Although less pronounced, a similar relationship occurred between locus of control and near misses, with each one-point increase corresponding to an 8% decrease in the likelihood of a near miss. These findings suggest that mine operators should consider how individual worker attitudes about risk perception contribute to safety management and could apply to other high-risk industries like chemical processing.

Outside NIOSH:
Better Safety Climate May Aid Recovery After Illness and Injury

A small survey of Latino forestry workers in Oregon showed that most did not receive adequate treatment or support after work-related injury or illness, according to a NIOSH-funded study at the University of Washington published in the Journal of Agromedicineexternal icon. Latino forestry workers who did receive treatment or support were more likely to fully recover and reported that their employer promoted safety through policies, practices, and resources—indicators of a healthy safety climate.

In Oregon, most forestry workers are Latino and may be at greater risk for work-related injury and illness due to language, cultural, and socioeconomic barriers. To understand how safety climate affects their treatment and recovery after injury or illness, researchers interviewed 23 of these workers in southern Oregon. The research participants were Mexican males, with an average age of 30 years and an average of 3 years on the job, who were injured or sickened at work within the past 2 years.

Reported injuries and illnesses included broken bones, chainsaw cuts, back pain, and heat- and pesticide-related illnesses. Interview responses showed that two-thirds of these incidents fell under system failure and one-third under system functional. In terms of safety climate, most participants reported at least one indicator at their workplace. Overall, researchers found that workers in companies with more safety climate indicators were more likely to recover. Additionally, injured workers who had an interpreter at their medical exams unaffiliated with their employers also had better outcomes. According to the researchers, these findings indicate that a healthy safety climate can help improve recovery for injured forestry workers, especially among vulnerable immigrants and other minority workers. 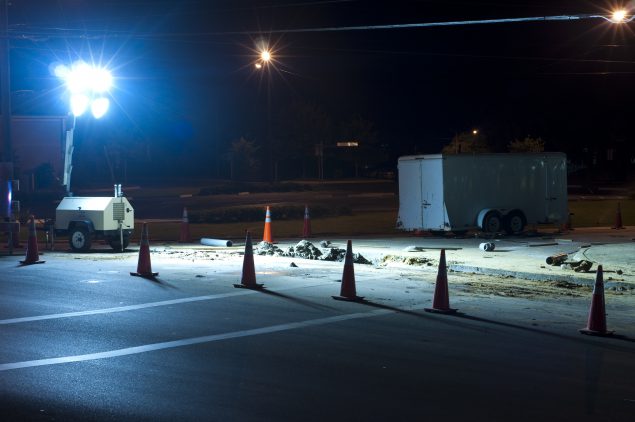 For motorists and the workers who build, repair, and maintain streets, bridges, and highways, roadway work zones can be dangerous. In these areas, a variety of complicated road signs, barrels and lane changes could increase the risk of motor vehicle crashes.

According to the Federal Highway Administration, 24,745 people died between 1982 and 2015 in motor vehicle crashes in construction and maintenance work zones. This equates to 750 deaths per year. Although the number has declined from 2008–2014 to a yearly average of 581, roadway work zones still present risks to workers and others.

To prevent crashes in work zones, safety equipment, such as flashing yellow warning beacons, is critical. These lights aim to get motorists’ attention as they approach or drive through work zones and to alert them of potential hazards and nearby workers. Current standards for warning beacons include a minimum light intensity to ensure risks are seen, but do not identify a maximum degree of light intensity to protect against glare or distraction. The standards also do not differ between daytime and nighttime conditions, despite research showing the need for less light intensity at night.

In a NIOSH-supported study published in Accident Analysis & Preventionexternal icon, scientists at Rensselaer Polytechnic Institute recently explored the effect of varied light intensities and other factors on motorists’ ability to detect workers while approaching work zones and warning beacons. Additional factors included how frequently the warning beacons flashed and whether or not workers wore high-visibility, reflective safety clothing.

Scientists conducted this nighttime field study on a test track with four life-sized, cardboard workers—two with and two without reflective vests—positioned alongside the track lit with warning beacons. Non-reflective gray spray paint simulated dark clothing. Study participants included seven females and seven males ranging in age from 18 to more than 60 years. The drivers operated the same vehicle equipped with a device to record information, such as driving speeds and the distance at which they saw the simulated workers, related to various warning beacon light intensities and flash frequencies.

The recorded information showed that visibility was greatest at night when the warning beacons had light intensities (max/min) of 25/2.5  candelas (cd) and 150/15 cd, and flash frequencies of either 1 hertz (Hz) or 4 Hz. In other findings, reflective vests enabled the drivers to see the simulated workers at the farthest distance tested, regardless of the frequency and intensity of the warning beacons. These results apply only to nighttime conditions and could help protect workers by increasing visibility in roadway work zones.