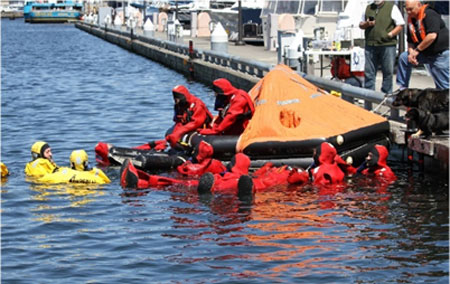 Fishermen in their immersion suits practice life raft entry at Fishermen’s Safety Day in Seattle, WA. This annual event is organized by Seattle Fishermen’s Memorial and offers hands-on training for commercial fishermen heading to Alaska for the summer salmon season. Photo from NIOSH.

Commercial fishing vessels in the cold, remote waters of Alaska are required to carry equipment to survive vessel sinkings. NIOSH examined the importance of this lifesaving equipment and the need for marine safety training in a recent study published in the journal Safety Scienceexternal icon.

Investigators looked at the events surrounding the sinking of 187 fishing vessels off the Alaskan coast during 2000 to 2014. They obtained the information from the NIOSH Commercial Fishing Incident Database, which is a surveillance system of work-related deaths and vessel disasters in the U.S. fishing industry. Among the 617 crewmembers onboard these sinking vessels, 557 survived and 60 died.

The investigators found several characteristics associated with surviving a fishing vessel sinking. When crewmembers spent any length of time in the water before rescue, characteristics that predicted survival were being within three miles of shore at the time of sinking, the sinking being unrelated to weather, and the crewmember entering a life raft. When immersion in the water exceeded 30 minutes, these characteristics changed somewhat. In addition to entering a life raft, wearing an immersion suit increased the odds of survival. As with survival after any time spent in the water, survival post 30 minutes increased when weather did not cause the sinking, while distance from shore was not associated with survival in these situations.

These findings underscore the importance of having access to life-saving equipment onboard fishing vessels and training to use it properly. NIOSH recommends that crewmembers take a marine safety class at least once every 5 years, wear a personal flotation device (PFD) whenever on deck, and participate in monthly safety drills. A complete list of recommendations for crewmembers and vessel owners and operators is available on the NIOSH website.

Workplace violence is a serious and growing problem in U.S. healthcare facilities, and nurses and nursing assistants face the greatest risk. At the same time, incomplete reporting of workplace violence highlights the need to improve monitoring and surveillance to protect healthcare workers, a NIOSH study reports in the American Journal of Industrial Medicineexternal icon.

Among hospitals participating in the Occupational Health Safety Network (OHSN), the rate of workplace violence increased dramatically from 2012 through 2015, climbing an average of 23% each year. The OHSN is a secure, online system that NIOSH administers to monitor occupational injuries and exposures among workers at U.S. healthcare facilities that volunteer to participate by reporting traumatic injury incidents. The OHSN enables participating facilities to report data on any or all of three injury categories: slips, trips, and falls; musculoskeletal disorders resulting from patient handling and movement events; and workplace violence.

The researchers also found that several reporting categories lacked information about severity of the assault, type of assailant (patient, worker, or visitor), and type of assault (verbal, physical, or against property). These categories are critical to developing interventions to prevent workplace violence. When records did include severity information, they showed that nearly half of the incidents resulted in lost work days, job restrictions, or transfers. When records included the type of assailant, patients were the most common assailants, accounting for nearly all of the incidents recorded. Finally, when records included the type of assault, nearly all were physical assaults to the healthcare worker, as opposed to verbal assaults or assaults against property.

Several limitations could have affected the results of the study. These limitations include OHSN’s non-random sample of self-selected participants, the small number of participating hospitals, and underreporting and missing information within the reports researchers received. Another limitation is that the study could not calculate the rates of workplace violence by hospital department. Despite these limitations, the study demonstrates the need to continue to examine and improve hospitals’ workplace violence surveillance data to inform research aimed at preventing this serious work-related hazard.

A simple, fast, and inexpensive blood test accurately detected the level of exposure to potentially harmful pesticides among agricultural workers, according to a NIOSH-funded study at Washington State University in Pullman, Washington, and the University of Washington in Seattle. The study appeared in the journal Biosensors and Bioelectronicsexternal icon.

Pesticides are a common agricultural aid that can help increase harvests. The problem is that over-exposure to some pesticides can cause serious health problems such as nerve damage, so worker protection, including exposure monitoring, is critical. At NIOSH, the Pesticide Surveillance Program monitors work-related illness and injury from exposure to pesticides.

Currently available tests for exposure monitoring are expensive, time-consuming, and require special equipment and trained personnel. To address this issue, the scientists created and verified a simple, inexpensive blood test that could be used to quickly diagnose exposure among agricultural workers. The so-called sandwich ELISA test is unique in its ability to measure the level of immune response-triggering molecules, or antigens. Much like the commercially available pregnancy tests, this test comprises a treated strip that reacts in the presence of specific protein molecules, or enzymes. In this case, the treated strip changed color in the presence of enzymes produced by the liver after exposure to phosphorus-based pesticides.

To verify the test’s accuracy, the scientists measured the level of pesticide exposure in 124 blood samples from study participants who had worked with pesticides in orchards or on cotton farms in Washington State or Pakistan. They found that the test accurately and quickly measured pesticide exposure by detecting pesticide-related enzyme activity and the total amount of enzyme in the blood. With the goal of making the test commercially available, the scientists now are verifying its accuracy and developing software to enable its use in the field. 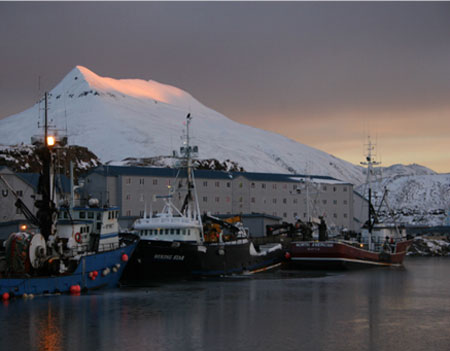 Crab boats moored in Dutch Harbor, Alaska, with alpenglow on Mt. Ballyhoo in the background. Photo from NIOSH.

Days and nights at sea, poor weather, potentially slippery decks, and work with ladders and other equipment make seafaring one of the most dangerous occupations in the United States. By its nature, seafaring also means that workers are far away from medical help. In addition to limited prevention, diagnosis, and treatment options, this isolation makes studies of illness and injury challenging and rare, so the number of at-risk workers is difficult to determine.

To address this problem, a NIOSH-funded study at Yale University School of Medicine investigated common illnesses and injuries reported via telemedicine by seafarers. Researchers described calls to a telemedicine company that serves shipping companies and their workers. The calls, received from January 2014 to July 2016, included reports of viral illness, seizure, musculoskeletal problems, and eye injury. According to the 2.5-year study published in the American Journal of Industrial Medicineexternal icon, seafarers reported a total of 1,339 incidents; 860 of these were illnesses, and 479 were injuries. This translates to 21% of all workers reporting illnesses and 11% reporting injuries. The most frequent illnesses were dental, followed by sore throats, sinusitis and other respiratory illnesses, skin rashes and infections, and stomach disorders, including diarrhea and reflux. Most of the injuries occurred in the upper extremities—shoulders, arms, wrists, and hands—followed by the legs, and then the back.

Injury was more commonly reported than illness on articulated, or pivoting, tug barges and general cargo vessels. In contrast, seafarers on military vessels were more likely to report illness than injury. Similarly, the risk of disability due to illness or injury differed somewhat by vessel type, with workers on dry cargo ships and articulated tug barges at greater risk than workers on container vessels. Unlike injuries and illnesses, disability risk did differ somewhat by job type; workers who had not earned a competency certificate, who are known as deck ratings, were at greater risk than officers.

Additional research is needed to confirm the study’s results, determine the source of seafarers’ health risks, and develop interventions to prevent injury and illness among seafarers. Ultimately, these findings will inform prevention efforts aimed at protecting this essential and understudied group of workers.