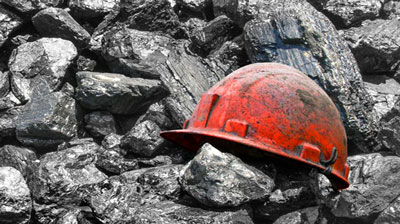 A NIOSH public-health investigation found a large cluster of severe black lung disease primarily among former coal miners. This finding underscores the importance of regular screening and protection from exposure to coal mine dust. Photo from Thinkstock.

NIOSH researchers, in partnership with staff from a network of federally funded black lung clinics in Virginia, have reported the largest cluster of severe black lung disease ever described in the scientific literature, according to new research published in the Journal of the American Medical Association (JAMA).

Coal workers’ pneumoconiosis, also known as “black lung” disease, can be severe, disabling, and even deadly. Since inhalation of coal mine dust is the sole cause, it is also entirely preventable. Early detection of black lung and limiting additional dust inhalation is critical to prevent the disease from progressing to its most severe and disabling form.

As a service to miners, NIOSH administers the Coal Workers’ Health Surveillance Program, which in 1970 began offering periodic chest X-rays to screen working coal miners for signs of black lung disease. By the late 90s, the proportion of screened miners with black lung disease reached the lowest level on record. However, after that time, the trend reversed. In addition, in 2014, a report identified an uptick in the number of cases of an advanced form of black lung disease called progressive massive fibrosis among working coal miners in Appalachia.

During 2017, NIOSH undertook a public-health investigation in response to a request from the director of three black lung clinics in Southwest Virginia. These clinics primarily serve former coal miners and are not part of the Coal Workers’ Health Surveillance Program.

According to the report in JAMA, among approximately 11,200 coal miners screened from January 1, 2013, to February 15, 2017, 416 showed signs of the most severe form of black lung disease, also known as progressive massive fibrosis (PMF). The average age of these miners was 62, and most lived in either Kentucky or Virginia. On average, the miners had worked in coal mines for nearly 28 years, with 80 reporting that they had worked in the mines for 20 or fewer years, indicating rapid disease progression. At the time of the screenings, 42 patients with PMF were still working as coal miners. The actual number of miners in the region with PMF caused by black lung disease is likely much higher because this study focused on only three clinics.

The findings reflect a failure to protect these coal miners from work-related exposure to coal mine dust and highlight the critical need for these protections, according to the investigators. A 2014 federal rule decreased the amount of respirable coal mine dust permitted in mines, implemented changes for monitoring dust levels in air, and expanded the Coal Workers’ Health Surveillance Program. Regular screening for black lung disease remains critical for early detection and determining if contemporary miners receive adequate protection.

Work-related injuries and illnesses are a significant and persistent problem in many industries. The first step in prevention involves pinpointing risks by understanding where and how injuries and illnesses occur. Typically, researchers look at reported cases using workers’ compensation and other official records, but these cases may underestimate the true number of injuries due to underreporting and use of group health insurance, rather than workers’ compensation.

To understand the true cost of workplace injuries and illnesses, NIOSH-supported researchers at the Harvard T.H. Chan School of Public Health study the cost of health insurance and patterns of underreporting. The following summaries present findings from two of their studies. The first appeared in the Journal of Occupational and Environmental Medicine and the second in the Scandinavian Journal of Work, Environment & Health.

Workers’ compensation benefits were nearly $62 billion in 2015 according to the most recent statisticsexternal icon from the National Academy of Social Insurance. However, the actual cost of work-related injuries and illnesses may be much higher since other insurance plans, including employer-based group health insurance, may also cover healthcare costs. The question is what share of these costs are borne by group health insurance?

To find out, researchers reviewed information on injuries recorded by the Occupational Safety and Health Administration for 2,495 healthcare workers from 2010 to 2013. All of the healthcare workers in the studyexternal icon were female and working with patients as either a nurse or an aide in one of two large hospitals in the northeastern part of the country. For comparison, the study included 2,697 non-injured healthcare workers.

Study results showed that work-related injuries led to increases in costs to employer-based group health insurance, even though workers’ compensation is available to cover costs related to these injuries. The injured workers’ combined insurance claims were significantly higher 3 and 6 months after the injury, compared to the costs among non-injured workers. At 3 months, these combined costs were $275 greater, and 6 months post-injury they had climbed by $587.

These findings indicate that workers’ compensation costs may not reflect the true cost of work-related illness and injury. Additionally, they show that employers could use this study’s methods to understand how work-related injuries and illnesses affect group health insurance costs.

The results showed that 244 workplace injuries had occurred. In comparison, the hospital’s computerized injury-reporting system logged 126 workplace injuries. Among black workers, self-reported injuries were more likely to go unreported to the hospital than were injuries to white workers, according to the studyexternal icon. These findings indicate that racial differences in the frequency of workplace injury may be greater than official injury reports indicate, due to more frequent underreporting among black than among white workers. However, more research is needed to understand these differences

The NIOSH Total Worker Health® Program strives to protect workers by considering the whole spectrum of influences on worker safety and health. In addition to tangible work-related risks, such as handling hazardous chemicals or operating heavy machinery, these influences extend far beyond the workplace to the worker’s home and community. They include wages, workload, and stress, as well as the relationships between workers and employers, and even adequate sleep.

For long-distance truck drivers, inadequate sleep can be a problem. One way that companies address sleep is to assign drivers in pairs, so that one worker can sleep while the other drives. Sleeping in a noisy, moving vehicle, however, does not provide the same restful sleep as a stationary bed in a quiet room. The resulting fatigue can affect work performance and health, as inadequate sleep contributes to chronic health conditions such as obesity and diabetes.

To improve sleep quality for truck drivers, a new collaborative research study at the Oregon Health & Science University and the University of Washington1 is underway. Taking a two-pronged approach to the problem, the Tech4Rest Studyexternal icon is looking at the effects of an enhanced truck cab and a behavioral sleep health program on truck drivers’ sleep habits. For the enhanced truck cab, researchers are testing the sleep effects of a therapeutic mattress system and an active suspension seat to reduce whole body vibrations during driving and sleep periods. The behavioral sleep health program, Fit4Sleep, currently is testing different interventions, including physical activity, sleep training, and health coaching.

1 Funding for Tech4Rest is provided by the National Institute for Occupational Safety and Health (NIOSH; grant: U19OH010154) and the Washington State Department of Labor and Industries