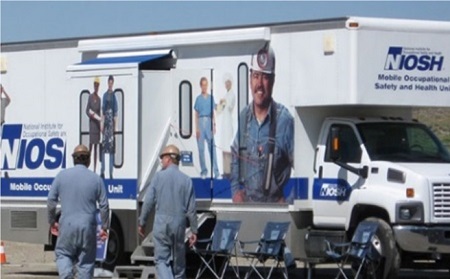 Black lung disease refers to a group of lung diseases caused by breathing in coal mine dust. The disease can cause severe problems like shortness of breath, and can even be fatal, but limiting exposure to coal mine dust can prevent it. While often thought of as a disease of the past, it is still an important problem, especially for coal miners in the central Appalachian states of Kentucky, Virginia, and West Virginia.

NIOSH administers the Coal Workers’ Health Surveillance Program, first established in 1970. As part of the program, coal miners are offered periodic chest X-rays to identify early stages of a type of black lung disease, called pneumoconiosis, when steps can still be taken to prevent progression to severe disease. Miners with evidence of black lung on their chest X-rays are eligible to exercise the “Part 90 optionexternal icon,” which guarantees their right to work in a position at the mine with lower dust exposures (either through engineering controls at their current position or by transferring to a less dusty position) while keeping their regular rate of pay.

A recent NIOSH study published in the journal Archives of Environmental and Occupational Health found that a low proportion of eligible miners exercise their Part 90 rights. Among 3,547 coal miners who were eligible to request a transfer during 1981–2016, only 509 (or 14.4%) did so. Coal miners in central Appalachia were less likely to request a job transfer under the Part 90 option. Miners who had worked longer in coal mining were more likely to request a job transfer.

The study’s findings show the importance of informing miners about the risks of exposure to coal mine dust and their right to work in an environment free of dangerous dust exposures. Also, additional research is needed to understand and address barriers to Part 90 participation, so that more miners can take steps to protect themselves from developing symptomatic lung disease.

Do Health Care Workers Stay Home from Work When Ill? Not Always

If you have gone to the doctor recently with flu-like symptoms, your doctor may have advised you to stay home from work until you have recovered. But, do you know if your doctor and other health care workers also follow that advice? Unfortunately, many of them may not, according to a NIOSH studyexternal icon in the American Journal of Infection Control.

Each year in the United States, the flu causes mild to severe illness and at times can lead to death. One of the best ways to prevent the flu is by getting the flu vaccine, according to the Centers for Disease Control and Prevention (CDC). If you do develop symptoms of the flu, however, you can prevent it from spreading in the workplace by staying home. The CDC recommends staying home from work until you have had no fever for at least 24 hours.

In this study, investigators wanted to learn if health care workers follow that advice. They used a 2015 Internet survey of 1,914 health care workers to calculate how often they reported going to work with flu-like symptoms, including fever and cough or sore throat, during the 2014–2015 flu season. The results showed that many of the survey respondents did not follow the recommendation to stay home in order to prevent the spread of influenza in the workplace. Overall, 41% reported working with flu-like symptoms for an average of 3 days. By occupation, pharmacists were the most likely to work while sick, with 67% reporting that they did so, followed by 63% of physicians. In other findings that looked at work settings, health care workers employed by hospitals were the most likely to report working while sick at 49%.

So, why do health care workers go to work while sick? Most survey respondents who reported that they did so cited being able to perform their jobs despite being sick. They also said that they did not feel sick enough to stay home and miss work. Health care workers employed by long-term care facilities, however, most commonly cited lost pay as a reason for going to work while sick.

These findings underscore the importance of interventions to decrease transmission of the flu in health care settings, according to the investigators. One approach is through training that dispels misconceptions health care workers may have about working while sick. Another approach is to consider improvements to paid sick leave policies.

We spend at least one-third of our lives at work. While we may spend only a portion of our lives at work, our work and non-work lives are connected. Outside worries and issues affect our work, and work, in turn, affects other parts of our lives. The health effects of work on our health may be underestimated and unclear because of this connection.

This cumulative distress is part of the estimated health burden of work-related illness and injury, which also includes pain, anxiety, financial costs, and even deaths. To improve the accuracy of these estimates, NIOSH scientists recently recommended a new and expanded approach in a paper published in the American Journal of Public Health. Lead author Paul Schulte, Ph.D., explains the key points:

Q: Why is a new approach necessary?
A: Estimates of the work-related health burden inform funding decisions for both research and safety interventions, so accuracy is critical. Current estimates focus on specific factors such as injury, disability, death, or economic cost, which may not reflect far-reaching consequences. In other words, work-related illness and injury do not exist in a vacuum, but affect workers and employers, as well as families, communities, and the larger society.

Q: What is the new approach?
A: We propose expanding the approach with four primary perspectives: (1) multiple domains, (2) work-relatedness of illness and injury, (3) working-life continuum, and (4) well-being.

The first perspective of multiple domains recognizes the myriad effects of work-related illness and injury. Often, these effects extend to the worker’s family and community and include economic losses, inability to function, depression and anxiety, and impaired family relationships and even divorce in some instances. Similarly, the employer may face economic losses, such as direct medical costs, pension and wage replacement, and others. For society, costs can include higher consumer prices, decreased productivity, and workers’ compensation expenses. 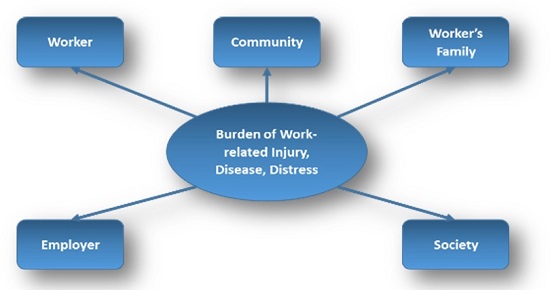 A new and expanded approach could help improve estimates of the work-related health burden. Image from NIOSH.

Work-relatedness of Illness and Injury

Third, it is useful to view the health burden through the lens of the entire working-life continuum: preparing for work, working, and retiring. Unlike past generations that spent a career in one company, today’s workers typically hold many jobs. In fact, workers born between 1957 and 1969 held nearly 12 jobs in their first 48 years of life, on average, according to the U.S. Bureau of Labor Statistics.

Finally, understanding the comprehensive concept known as “well-being” can inform estimates of the work-related health and psychological burden. In addition to health, well-being includes feelings such as happiness, life satisfaction, positive emotion, and self-determination.

Q: What is the next step?
A: Together, the four perspectives could provide more details about workers’ lives and, subsequently, lead to better estimates of the work-related health burden. To develop this approach, it is important to continue research aimed at how to measure the effects of work-related illness and injury and to collect that information. 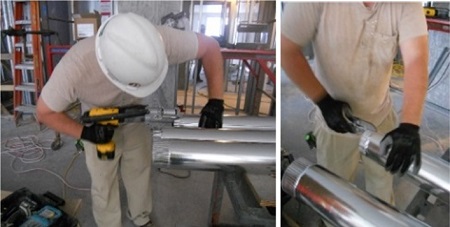 The power crimper, left, received a rating of “always adopted” for its clear advantages over the manual crimper, right. Photo from the study investigators.

A rating system helped predict which solutions construction workers would use to prevent musculoskeletal disorders, according to a NIOSH-funded studyexternal icon at Washington University School of Medicine in St. Louis, Missouri. The study appeared in the American Journal of Industrial Medicine.

In this study, three analysts, including an occupational-medicine physician and two occupational therapists, rated the likelihood that construction workers would adopt 16 different solutions to tasks that could cause musculoskeletal disorders. For example, one solution, pictured above, involved using an electric-powered crimper instead of a manual crimper to crimp the edges of metal pipes used for ductwork. The three analysts selected the solutions from a previous study, by the same group of investigators, testing the adoption of solutions among 86 workers from seven floor laying, carpentry, and sheet-metal companies. Using this information, as well as findings from focus groups, research observations, and interviews with contractors and industry representatives, the analysts defined barriers and facilitators to adoption.

Next, they used a 2007 rating system to score the likelihood that the construction workers and their contracting companies in the previous study would adopt each solution. The rating system includes five categories: (1) relative advantage, (2) compatibility, (3) complexity, (4) ability to try the solution (or trial ability), and (5) observability. In addition to these five categories, the analysts added usability.

Study results showed that the six categories helped predict which solutions the workers were more likely to adopt. In addition, simple solutions faced fewer barriers to use than complicated ones. Of the 16 methods tested, the rating system identified two—the power crimper and an extended pry bar for jacking up furniture—that workers would always use and 12 that they would use either always or sometimes. In the case of the power crimper and extended pry bar, study participants called using them a “no brainer” because they were so much more efficient than other methods and they worked in most situations. In fact, these tools were so efficient that a single trial convinced workers to use them.

These findings show that the rating system could help predict the adoptability of simple solutions to prevent musculoskeletal disorders among construction workers. For complicated solutions, however, the rating system alone may be less useful at predicting adoption. According to the investigators, predictions in these cases may require additional time, resources, and changes in work culture.