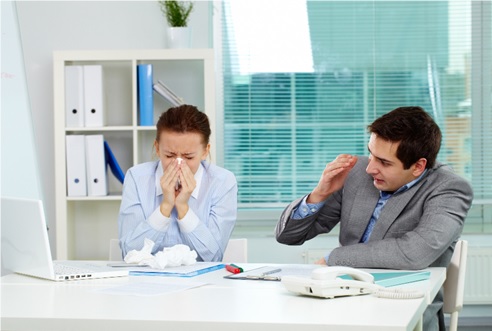 Paid sick leave might help reduce absenteeism related to the spread of flu and other infectious diseases, which might translate into money saved for employers. Photo from Thinkstock.

If you have recuperated from an illness or injury at home recently—or enjoyed the workplace quietude while your coughing, sniffling, and sneezing coworker stayed home—you probably know firsthand the benefits of paid sick leave.

Unfortunately, many workers still do not have access to this job benefit, even though it may help employers reduce absenteeism-related costs, according to a recent NIOSH studyexternal icon published in the Journal of Occupational and Environmental Medicine.

To begin filling this knowledge gap, NIOSH researchers estimated potential savings using the national Medical Expenditure Panel Surveyexternal icon and other published results. They found that paid sick leave might help reduce absenteeism related to the spread of flu and other influenza-like illness. In turn, this reduction may translate into money saved for employers. Looking specifically at the years 2007 to 2014, the researchers estimated that providing paid sick leave to workers who lack it might help decrease the number of workdays lost due to flu and similar illnesses by nearly 4 to 11 million per year. In terms of the bottom line, this decrease might save employers almost $1 to $2 billion, expressed in 2016 dollars, in reduced absenteeism costs related to flu and similar illnesses during each of these years. In an earlier studyexternal icon, NIOSH researchers found a link between parents’ access to paid sick leave and the likelihood of flu vaccination among their children.

Other potential benefits of paid sick leave may include reduced job turnover, fewer sick employees attending work, or presenteeism, and a lower incidence of non-fatal workplace injury, according to the study. Future research is needed to verify these estimated benefits and to examine whether they vary across industries, job occupations, and company size. Still, these findings might help employers consider paid sick leave as an investment that actually saves money over the long term. 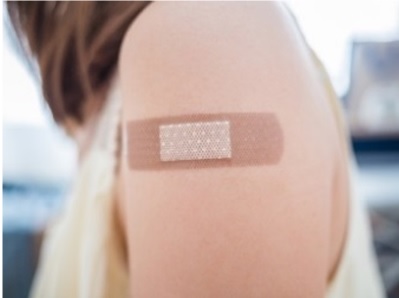 Pneumococcal pneumonia is caused by Streptococcus pneumoniae bacteria that can invade the lungs. Every year, about 900,000 Americans get pneumococcal pneumonia, and 5%–7% die from it. The infection is especially risky for those with underlying disease such as asthma, so prevention is critical.

Researchers analyzed information from the CDC 2012-2013 Behavioral Risk Factor Surveillance System (BRFSS) available from 29 states, for adults aged 18–64 years with asthma who have ever held a job. This information represented about 12 million people and enabled the researchers to examine pneumococcal vaccination coverage by work-related asthma status. They found that 42% of previously or currently employed adults with asthma had received a pneumococcal vaccination. Fifty-four percent of adults with work-related asthma reported being vaccinated, compared to 35% of adults with non-work-related asthma. Adults with work-related asthma who were Hispanic (36%) and those without health insurance (39%) had the lowest vaccination coverage. One limitation of the study is that the information used in the analysis was for adults living in 29 states, so the results may not be representative nationally or of non-participating states.

The researchers recommend that healthcare providers verify if their patients who have asthma have received a pneumococcal vaccine and offer the vaccine to those not vaccinated. Other potential interventions include:

Patients with asthma should also take an active role by knowing their vaccine status and asking their healthcare providers about vaccination.

While many of us think of bullying as something that happens in school, for many workers bullying remains a persistent problem in the workplace. At NIOSH, researchers study how to prevent work-related bullying, particularly in the nursing profession. Now, a recent studyexternal icon by NIOSH and university partners, published in the Journal of Nursing Education and Practice, has found that an education program incorporated into nursing-school curricula could help prevent bullying among working nurses. We asked study co-author Paula Grubb, Ph.D., NIOSH research psychologist, to explain the study and its findings.

Q: What is work-related bullying among nurses and how big is the problem?

A: Unfortunately, bullying has plagued the nursing profession for years, with as many as one-third of nurses experiencing it, according to some studies. In fact, the first part of the paper’s title, “Nurses Eat Their Young,” is a widely known, decades-old idiom among nurses worldwide.

For our research, we defined bullying among nurses as negative behaviors related to work activities, as well as to personal and physical aspects. These negative behaviors include withholding information, ignoring coworkers, spreading rumors, and intimidating others. Early educational interventions—ideally, in nursing school—to raise awareness and teach effective preventive skills are critical to preventing bullying among practicing nurses.

Q: How did you do the study?

A: We developed a multicomponent educational program for nursing students in their junior and senior years. In earlier research, we found that role-playing is an effective way to teach nursing students how to recognize, handle, and prevent bullying situations, so one of the components is classroom-based role playing. Other components include presentations, both in the classroom and on-line, and classroom discussions based on students’ responses to a questionnaire about bullying. We then tested the program on five university campuses.

Q: What did you find?

A: In the pilot study, we found that this educational program comprising a range of teaching methods over 2 years could improve anti-bullying education and, subsequently, help reduce the incidence of bullying among practicing nurses. Since the program includes multiple components, it is important that nursing schools begin to incorporate them during the sophomore year.

Faculty reviewers at five university campuses liked the program, overall. In particular, they commended it for using multiple teaching approaches, encouraging discussion about the issue of workplace bullying, and increasing student awareness of their own risk for bullying.

A: Now that we have tested the program and found that it helps reduce the occurrence of workplace bullying, additional studies are necessary to evaluate its long-term effects. In other words, we need to see if nursing students who complete the program adopt and use what they have learned to prevent bullying once they enter the nursing workforce. It is also important to study whether nursing schools can implement the program effectively on their own without undergoing special one-on-one training.

In March 2015, Germanwings Flight 9525 crashed into the French Alps, killing all 150 people onboard.  An investigation found that the co-pilot deliberately steered the plane into the mountainside. It also revealed that he had a history of depression, although the airline company was unaware of this crucial information.

Worldwide, depression affects about 350 million people. Its symptoms, which differ from those of occasional sadness related to disappointment, loss, and other life changes, include persistent feelings of sadness, hopelessness, and loss of interest in work and other activities. Among workers, untreated depression can affect the ability to perform tasks and—as the Germanwings incident shows—in rare instances, can result in devastating consequences.

In one of the first studies of its kind, a NIOSH-funded studyexternal icon published in the journal Environmental Health, looked at the prevalence of depression among commercial airline pilots. Using an anonymous web-based survey of pilots recruited from unions, airline companies, pilot groups, and aviation safety organizations, researchers at the Harvard T.H. Chan School of Public Health asked about depression and other health issues. Between April and December 2015, 1,837 airline pilots completed the survey. More than 12% of survey respondents who answered the survey’s health questions met the criteria for depression, with 4% reporting suicidal thoughts within the prior two weeks. In other findings, pilots who reported using medication to aid sleep and who experienced sexual or verbal harassment were significantly more likely to be depressed.

Although this study relied on self-reports and represents a small sample of airline pilots, it indicates that there may be a significant number of working pilots suffering from depressive symptoms. According to researchers, the results highlight the need for the airline industry to increase its support of preventive treatment for depression and other mental health disorders among pilots. Their next step is to study how sleep and circadian rhythm disturbances affect the risk of depression among this group of workers.