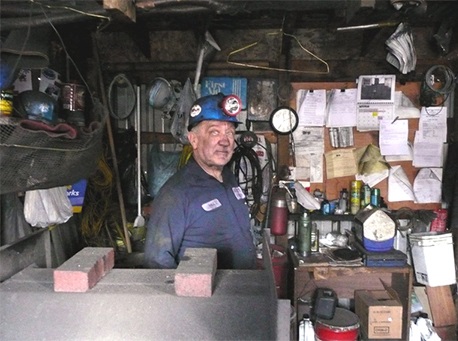 Bill Reiner, a 70-year-old coal miner in Joliett, Pennsylvania, stands in his miner's shanty surrounded by his repertoire of mining paraphernalia in March 2008. Photo by Anita L. Wolfe, CDC/NIOSH

Lung disease from work-related exposure to coal mine dust can damage different parts of the lungs, including the small airways. When these airways, which resemble twigs branching off the trunk of a tree, are damaged, breathing can become significantly difficult.

To understand how breathing in the dust affects these airways, investigators at the National Institute for Occupational Safety and Health (NIOSH) compared the results of exercise testing to resting lung function. Volunteer study participants were 20 coal miners from the field-based U.S. National Study of Coal Workers’ Pneumoconiosis. Before the exercise testing, which took place on a treadmill, study participants underwent a special spirometry breathing test to measure small-airway function. For 6 participants, the test showed signs of dysfunction in the small airways, while the remaining 14 had normal results. During exercise testing, the lungs of participants with small-airway dysfunction transferred 27% less oxygen compared to those with a normal small-airway test, the investigators report in the journal Annals of the American Thoracic Societyexternal icon. Participants had worked in underground coal mines for an average of 25 years. At 59 years of age, the average age of participants with small-airway dysfunction was 5 years older than those whose function was normal. The study’s findings add to existing evidence that dysfunction of the small airways is associated with inefficient breathing during exertion. In addition, they show that exercise testing may be important to diagnose intolerance to physical exertion among current and former coal miners, even with minor small-airway dysfunction on standard spirometry tests performed at rest.

Fast and efficient responses to crash events and disasters depend upon emergency medical services (EMS) workers, who include first responders, emergency medical technicians, and paramedics, as well as firefighters and nurses. Often, EMS workers treat patients in ambulances en route to the hospital, which presents the inherent risk of high-speed travel. In fact, nationwide, EMS workers are more likely to die on the job compared to all other workers, with nearly half of these deaths stemming from motor vehicle crashes on our highways. Between 1992 and 2011, 21% of deaths from ambulance crashes were among EMS workers and patients, and 4% were among ambulance drivers, according to datapdf iconexternal icon from the National Highway and Traffic Safety Administration. In the majority of these crashes, the EMS worker was unrestrained.

To decrease the risk, investigators at the National Institute for Occupational Safety and Health (NIOSH) work with several federal partners and private ambulance manufacturers to design safer patient compartments for ambulances. The goal of this work is to design interiors that would allow the EMS worker to do his or her job while remaining seated and properly restrained. This research also aligns with the NIOSH Prevention through Design initiative, which strives to protect workers by minimizing work-related safety and health risks by building safety into the design and manufacturing process.

Over the past several years, NIOSH, with its partners, conducted 15 full-vehicle ambulance crash tests. The findings from these tests have contributed to the development of several new crash-test methods focused on improving seating and restraint structural integrity. It has also highlighted the need for anthropometric—or body measurement—data of EMS workers to improve seating, restraints, and interior workstation design. To support seating, restraint, and workstation design to address this need, NIOSH investigators identified and collected a set of 39 body dimensions and weights. Between December 2013 and May 2015, the investigators collected these data from 472 male and 161 female EMS workers from four regions including the Northeast and Mid-Atlantic, the South, the Midwest and Great Lakes, and the Pacific West. The measurements included everything from the depth of the abdomen while the subject is sitting, to the length from the elbow to the middle fingertip. With these carefully selected measurements, the investigators developed a new anthropometric database that may help ambulance manufacturers improve the design of the ambulance patient compartment for safe and effective use. The database is currently available on the NIOSH website.

Most people know that smoking cigarettes can lead to severe lung damage, including chronic obstructive pulmonary disease, or COPD. What they may not realize is that COPD can occur from exposure to hazardous substances at work as well. At the National Institute for Occupational Safety and Health (NIOSH), investigators are studying the causes and how to prevent COPD.

In the workplace, the risk of developing COPD may increase with exposure to certain substances such as vapors, gases, dusts, and fumes. Certain jobs carry a greater risk of these types of exposures compared to others. A fundamental part of prevention efforts involves determining which jobs are high- versus low-risk. For this study, investigators analyzed data from prior research of COPD and work exposures among members of Kaiser Permanente Northwest, an integrated health plan based in Portland, Oregon.

To classify jobs according to their risk of COPD exposures, NIOSH investigators developed a tool, or exposure matrix, to assign COPD exposure levels to the United States Census 2000 occupations. To test the accuracy of the matrix, investigators compared it to another method that uses detailed information about specific occupations, industries, and job tasks. They found that the NIOSH matrix performed better compared to this other method when categorizing jobs with a low risk of overall COPD-related exposures, especially those related to organic dust, according to their paper in the journal Occupational and Environmental Medicineexternal icon. The investigators are now investigating the COPD exposure matrix further in other studies. 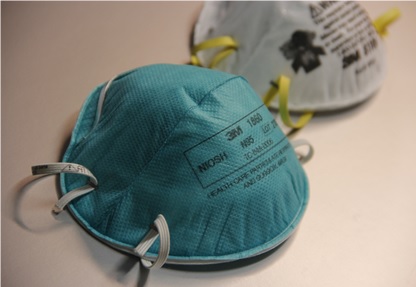 Now that flu season is officially here, we may feel heightened concern about the cause of our coworker’s, friend’s, or elevator mate’s cough. For healthcare workers, this seasonal concern is of year-round importance.

To protect healthcare workers from exposure to airborne germs and other particulate health hazards, investigators at the National Institute for Occupational Safety and Health (NIOSH) examined the use of respiratory protective devices within hospitals. It is critical to understand the types of respiratory protection healthcare workers use, so that workers receive appropriate training for their device. In addition, this information enables stockpiling of the most widely used devices for public health emergencies, such as the 2014 Ebola epidemic in West Africa.

To find out if the type of respiratory protection among healthcare workers has changed since the Ebola epidemic, the American Association of Occupational Health Nurses (AAOHN) sent an online questionnaire to several professional nursing society members. From the 554 responses to the survey, the NIOSH-certified N95 filtering facepiece respirator (N95) continued to rank as the most popular type of respirator, as reported in the journal Workplace Health & Safetyexternal icon. When properly fitted, the N95 effectively blocks small, potentially hazardous, airborne particles to form a tight seal over the nose and mouth. Although the N95 remained the most widely used respiratory protective device nationwide, the survey also found that some respondents, especially in the West and Midwest areas of the United States, increasingly use powered air-purifying respirators. Since these types of respirators use a breathing tube, battery-operated blower, and a facepiece filter, they require quite different training than that of the N95. The investigators noted that these findings underscore the importance of matching end-user education with the actual type of device used, as well as informing decision making for emergency stockpile procurement.