A tractor chugging across a peaceful country field may look harmless but is, in fact, the main cause of occupation-related deaths among farmworkers. Most of these deaths occur when the tractor tips or rolls over, ejecting or crushing its occupant. In ongoing efforts to protect at-risk farmworkers, particularly youth, investigators at the National Institute for Occupational Safety and Health (NIOSH) recently undertook a demonstration project on how to retrofit an older model tractor with an engineering control called the cost-effective rollover protective structure, or CROPS, a type of rollover protective structure developed by NIOSH engineers. Working with two state partners, the demonstration project successfully retrofitted 50 tractors with a CROPS. These efforts, along with participants’ attitudes toward rollover protective structures, are described in a recent report in the Journal of Agricultural Safety and Healthexternal icon. The demonstration project was part of a longstanding program of NIOSH partnerships with manufacturers, farmers, and state agencies to address challenges in retrofitting older tractors with rollover protective structures and encourage their use.

Research shows that rollover protective structures like CROPS, with a seatbelt, are the best way to reduce the risk of death from tractor rollovers. These structures comprise a sturdy frame attached to a tractor to protect the driver in the event of rollover. Beginning in 1986, rollover protective structures became standard equipment on all new tractors, but many farmworkers still use older models that lack this critical protection. To test the feasibility of retrofitting tractors with CROPS in the field, the NIOSH demonstration project provided CROPS to volunteer study participants. Each study participant agreed to demonstrate the CROPS retrofit installation on a tractor to three to five of their colleagues, friends, and neighbors, with NIOSH and New York and Virginia state investigators on hand to provide assistance. 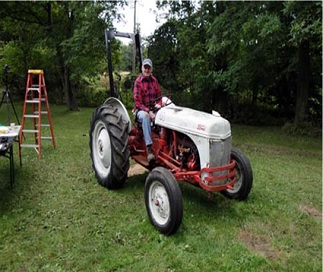 The best way to reduce the risk of death from tractor rollovers is by using a special device called a rollover protective structure with a seatbelt. The image above depicts a tractor retrofitted with the NIOSH CROPS. Photo from NIOSH. 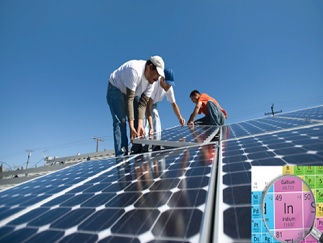 A growing body of research indicates that workers making and reclaiming ITO are at risk for indium lung disease. Photo from Thinkstock.

In our reliance on modern technology, previously obscure chemical compounds are making their way into the manufacturing mainstream. One of these compounds is indium-tin oxide (ITO), used to make products such as flat-panel displays, touch screens, solar panels, energy-efficient windows, and many others. Although these high-tech products may benefit the consumer, a growing body of research indicates workers making and reclaiming products containing ITO are at risk for indium lung disease. Studies describe this as a serious and potentially fatal condition that can progress from early filling of the lung’s air sacs with fluid to later lung scarring and emphysema. Indium can be detected in the blood of ITO workers, and workers with higher concentrations of indium in the blood appear to be at greater risk.

However, the precise relationship between the level of exposure to airborne indium compounds and risk of indium lung disease is unclear. For one thing, scientific evidence needed to relate workplace air concentrations of indium with concentrations in the blood of exposed workers has been lacking. In a recent study, NIOSH investigators and their partners helped to fill this gap. They recently found a correlation between the amount of indium in the workplace air and early signs of lung disease among a group of ITO workers, as reported in the peer-reviewed American Journal of Industrial Medicineexternal icon.

In this study, investigators examined blood concentrations of indium, air concentrations of indium, and lung health among a group of 87 volunteer study participants currently employed in the ITO industry. They found that the amount of indium in the blood reflected the air concentration of indium and the time employed in the ITO facility. In addition, the workers exposed to respirable indium for nearly 2 or more years had more shortness of breath, lower lung function, and higher levels of markers in the blood for lung damage than did workers with fewer than 2 years of exposure. In other findings, the study showed that those health effects occurred among workers in the study group who had relatively low levels of exposure to indium in the air. Further studies of other groups of ITO workers with longer and different types of work-related exposure to indium are important to confirm this study’s findings. Even so, the findings support precautionary efforts to reduce work-related exposure to respirable indium, according to the authors.

Carbon monoxide (CO) poisoning is a leading cause of death in underground mine fires. To identify safe emergency escape routes, investigators at the National Institute for Occupational Safety and Health (NIOSH), where mine worker safety and health is a research priority, study how to predict the spread of smoke and toxic gases throughout the mine’s ventilation network. Depending on the size of the mine, this vast network can comprise hundreds to thousands of junctions and airways. One way to predict the spread of deadly toxins is through computer programs that simulate a fire in a virtual underground mine.

In the peer-reviewed journal Applied Thermal Engineering, NIOSH investigators report on a study of two such programs and their ability to predict CO spread in an underground mine fire. The Fire Dynamics Simulator (FDS), developed by the National Institute of Standards and Technology, uses the principles of mathematics, physics, and computer coding. The second method, MFIRE, is a widely used mine-fire simulation program developed by the former U.S. Bureau of Mines. (Congress transferred the bureau’s mine safety research functions to NIOSH in 1997 after abolishing the bureau.) Although both programs model the flow of smoke and heat, they have different strengths. For example, the FDS provides detailed information such as airflow speed, direction, and pressure; gas concentration; and fire-related temperatures at different locations near the fire source within the virtual mine. In contrast, MFIRE simulates the mine’s ventilation network and provides information about gas concentration and temperature in each airway in the network.

For this study, investigators first conducted full-scale fire experiments in the controlled and safe environment of the NIOSH Safety Research Coal Mine. This 4-mile working complex is an underground test facility, located on NIOSH’s Pittsburgh, Pennsylvania campus, used to evaluate and develop health and safety interventions to protect mine workers. With the measurements from these experiments, the investigators used the FDS, after calibrating it with CO concentration data from the full-scale mine fire experiments, to calculate the heat generated by the mine fire and predict the CO concentration profiles at different locations in the mine. After programming MFIRE with these calculations, they found that fresh air leaking between adjacent airways affected CO spread by decreasing its speed and consistency. In another significant finding, they improved the accuracy of MFIRE’s predictions by using a more accurate dynamic heat-release rate generated by FDS. According to the investigators, integrating CO data with MFIRE creates continuously changing, more realistic conditions that, when used in existing training formats, can improve preparations for miner escape and emergency response. 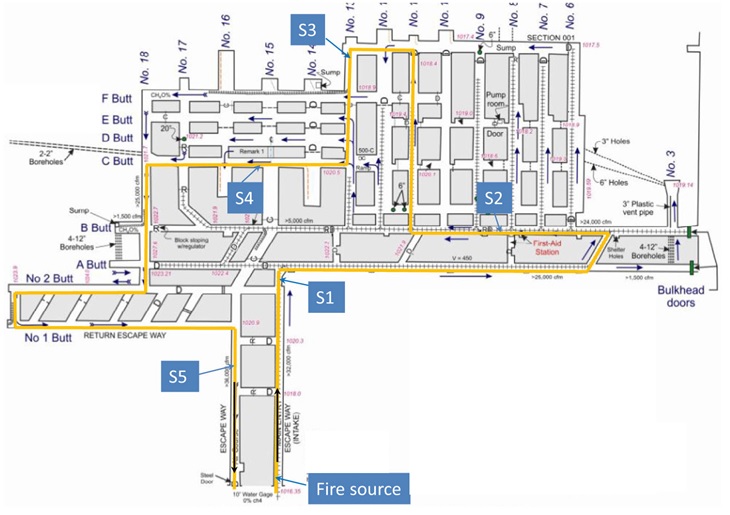 The NIOSH Safety Research Coal Mine, depicted in the diagram above, is a 4-mile underground test facility, located in Pittsburgh, Pennsylvania, used to evaluate and develop health and safety interventions for mine workers. Diagram from NIOSH. 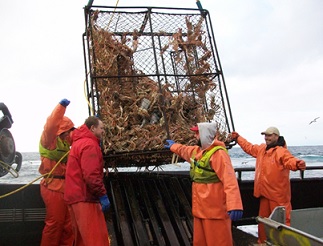 Crew members on a Bering Sea crab vessel land a pot of Opilio crab. Many nonfatal injuries occur when launching and retrieving the gear from a platform that is rolling with the seas and is often covered in water or ice. Photo courtesy of Mike Fourtner.

Seafood is part of a healthy diet, but for the fishermen who harvest the catch work presents many hazards. In fact, according to data from the Bureau of Labor Statistics, the United States fishing industry is one of the most dangerous in the country, with a fatality rate 35 times higher than the national average. This number, however, does not account for nonfatal injuries. Nonfatal injuries constitute the majority of all occupational injuries and can result in lowered productivity, lost wages, lowered quality of life, and disability.

Recognizing that the first step to preventing injuries is to identify their cause, Oregon State University (OSU) and NIOSH researchers recently confirmed the ability of a Work Process Classification System (WPCS) to associate specific job tasks with nonfatal injuries onboard Alaskan commercial fishing vessels. The WPCS is a coding system that was originally developed for describing patterns of injuries onboard Danish commercial fishing vessels. NIOSH and OSU researchers have modified the WPCS to describe the work processes and injury events associated with U. S. fleets. Worldwide, each fleet—a group of vessels fishing for the same species with the same type of gear in the same area—experiences unique hazards due to differences between vessels, gear types, and specifically the work tasks on deck and below deck.

Based on United States Coast Guard investigative reports, the researchers identified 136 nonfatal, traumatic injuries to workers on Alaskan fishing vessels from 2006 to 2010. The researchers reviewed narrative descriptions of the injury circumstances and used the WPCS to categorize fishermen’s job tasks at the time of the injury. Most injuries were reported on vessels using one of four gear types and the researchers identified hazardous tasks onboard each of these, with the most general categories of tasks and their associated number of nonfatal injuries indicated in Table 1.

This task- and vessel-specific information is essential for injury prevention efforts because it enables occupational safety and health specialists to target the hazards associated with the most frequent and serious injuries. The next steps, according to the researchers, are to design long-term studies in different geographical areas and onboard different types of vessels, as well as to calculate the amount of time that workers spend on tasks, which will allow for risk determination. Finally, it is important to improve the reporting of nonfatal injuries, particularly on smaller commercial fishing vessels. NIOSH works with industry to conduct safety research and seeks commercial fishermen’s input for determining practical, effective injury prevention strategies.