During severe disease outbreaks such as the 2014 Ebola virus epidemic in West Africa, wearing special gear can protect healthcare workers from exposure. This personal protective equipment covers the face and body to provide a physical barrier against germs. In addition, a respirator prevents the inhalation of airborne germs. Since many types of personal protective equipment worn during the Ebola response are made of heavy, fluid-resistant material, which can prevent sweat from evaporating and cooling the body, heat stress is a concern in hot weather.

At NIOSH, the safe use of personal protective equipment is a priority. Two studies recently published in the journal Disaster Medicine and Public Health Preparedness focused specifically on preventing heat stress while wearing this equipment in hot, humid environments. Volunteer study participants included six healthy, young men who received medical clearance by a licensed physician. To simulate working in the hot and humid conditions of West Africa, participants walked on a treadmill for 60 minutes in a special environmental chamber set to 90 degrees F (32 degrees C) and 92% relative humidity.

Personal Protective Equipment Does Not Take the Heat Equally 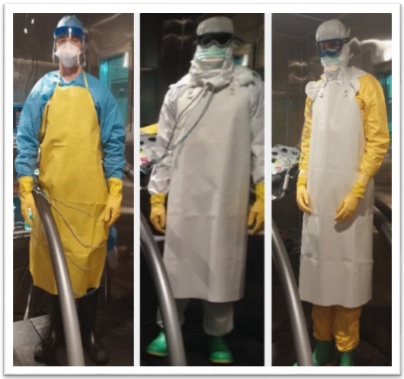 The first ensemble tested included a face shield and a fluid-resistant surgical gown. The other, more elaborate, ensembles included goggles, coveralls, and a separate hood for the second one, and highly fluid-resistant coveralls, a separate hood, and a surgical mask cover over a NIOSH approved N95 respirator for the third one. Participants wore each of the ensembles over standard medical scrubs.

Compared to participants wearing the first ensemble, those wearing the second and third ensembles had significantly higher heart rates and body temperatures after exercising on the treadmill. In addition, participants wearing the second and third ensembles reported feeling hotter and more tired. These findings underscore the importance of training healthcare workers and regulating agencies in proper selection of personal protective equipment to prevent heat stress. In addition to training, it is important to balance work in hot conditions with adequate rest periods and to use heat-prevention strategies such as cooling vests.

Study participants wearing special vests fitted with ice packs, phase-change materials, or water hoses under personal protective equipment had fewer signs of heat stress than participants who did not wear the cooling devices, according to a related study. These results highlight the importance of cooling vests for healthcare workers wearing personal protective equipment in hot, humid environments.

For this study, participants tested four different styles of cooling vests that were are made of fabric and fitted with cooling packs or water-circulation hoses. Two of the vests contained cooling packs made of a special material designed to stay cold for long periods. One of these contained gel ice packs, and one contained a battery-operated pump and small hoses to deliver cold water throughout the vest. Participants wore the vests over standard medical scrubs and under personal protective equipment.

At the end of the treadmill tests, participants who were not wearing a cooling vest had significantly higher body temperatures and heart rates than did those who wore one. Furthermore, participants lost more weight during the exercise test when they were not wearing a cooling vest. Smaller increases in body temperatures and heart rates occurred among participants wearing the cooling vests with the gel ice packs and water hoses, compared to those wearing vests containing the special cooling material.

In addition to measuring body temperature, weight, and heart rate, the investigators used a questionnaire to measure five subjective feelings of exertion: heat sensation, thermal comfort, rating of perceived exertion, breathing comfort, and wetness. They found that three of the five feelings—heat sensation, rating of perceived exertion, and breathing comfort—improved when participants wore a cooling vest.

Investigators noted that future research should look at the effects of wearing cooling vests on posture, balance, and mobility and the physical effects of wearing circulating-water vests prior to wearing the personal protective equipment. In addition, further research with larger populations that include women is necessary.

Quickly maneuvering to the side of the road to allow a lights-flashing, sirens-blaring ambulance to pass, we may wonder about the medical emergency unfolding inside the racing vehicle. “That could be me or one of my family members,” we may think, a bit nervously, glad that the patient in the ambulance is receiving medical attention. What we may not consider as we sit safely in our cars is that medical care occurring while the ambulance is moving could place both the patient and the emergency medical services (EMS) workers at additional risk in the event of a crash.

In fact, vehicle crashes are the leading work-related cause of death in the United States, according to the U.S. Bureau of Labor Statistics. At especially high risk are EMS workers. Part of the problem is that ambulances, although outfitted with the latest medical equipment, may not adequately protect either workers or patients in a crash.

To protect EMS workers, NIOSH applies a technique known as prevention through design. The ultimate goal is to make ambulances safer by designing the interior so that EMS workers can remain seated and restrained while treating patients, who are also restrained for protection. Furthermore, safe ambulance design anchors heavy equipment to prevent it from becoming a dangerous missile if a crash does occur.

The first step in designing safer ambulances is to identify weak spots by studying what happens to an ambulance in a controlled crash test. Working with the U.S. Department of Homeland Security’s Science and Technology Directorate, with assistance from other agencies and ambulance manufacturers, NIOSH investigators recently completed 17 full-vehicle ambulance crash tests following the guidelines used by the automotive industry to test cars in front, rear, side, and rollover crashes. Using a front crash as an example, the investigators programmed an ambulance to crash into a concrete wall at 30 mph.

During each crash test, engineers measured the energy transferred through the vehicle from the impact point in the front to the patient compartment in the back. Engineers used those measurements to develop new tests for the body structure of the ambulance patient compartment, plus all of its major components, including the patient cot, seating systems, equipment mounts, and storage cabinets. The goal of crash testing was to make sure all parts of the ambulance would stay safely intact during a crash.

The Society of Automotive Engineers (SAE)—the leading organization for vehicle-safety consensus standards—published 10 new crash-test methods, also known as SAE Recommended Practices, based on this work. Now seat, cot, and ambulance manufacturers have test methods they can use to design and test new products that focus on improving safety and function for EMS workers and patients.

The next step is to encourage adoption of the crash-test methods into each of three nationally accepted bumper-to-bumper consensus standards used by state agencies when buying new ambulances.

In the meantime, the crash-test methods are highlighted in a new video series that manufacturers can use to design and build safer ambulances. The seven-part series provides information on topics ranging from the history of ambulance safety to specific crash test methods and is available on the NIOSH website or by clicking the links below:

Latino workers tending thoroughbred horses experienced widespread respiratory symptoms and abnormal lung function, according to a NIOSH-funded studyexternal icon at the University of Kentucky and the University of Maryland published in the American Journal of Industrial Medicine. These findings suggest a need for increased use of dust masks and further studies of exposure to work-related hazards. 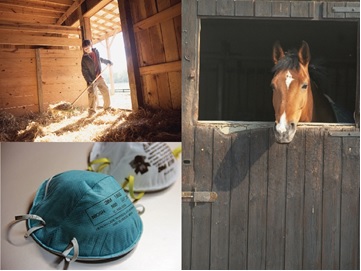 NIOSH-approved N95 respirators, like the one shown at lower left, can help reduce the risk of dust inhalation, but workers do not always use them. Photo of N95 respirator from the Centers for Disease Control and Prevention. Other photos from Thinkstock.

Dust in and around horse and other livestock barns often contains substances such as animal dander, bacteria, sawdust,  and particles of metal and sand that can harm the lungs if accidentally inhaled. Dust masks such as the NIOSH-approved N95 can help reduce the risk, but workers do not always use them. To understand and prevent the risk among Latino horse farm-workers, the study recruited 80 (mostly male), Mexican, adult horse farm-workers. Between July and September 2014, participants completed 40-item questionnaires, in either English or Spanish, and underwent lung-function testing (spirometry). As part of the study, investigators also distributed educational health and safety materials to horse farm-workers, owners, and managers.

They found that most (94%) study participants reported infrequent use of dust masks. At the same time, most (79%) reported respiratory symptoms over the past year, and 27% had symptoms of abnormal lung function. The study did not specifically link respiratory problems to work-related factors, such as dust exposure and use of dust masks. The high rate of symptoms and low use of dust masks, however, indicate that work conditions may be contributing factors, according to the investigators. This study is related to earlier NIOSH-funded researchexternal icon by the same investigators that also looked at work-related risks among Latino horse farmworkers.

In another finding, workers who had spent 5 years or fewer employed on a horse farm were more likely to have abnormal lung function and to report breathing difficulties than workers with more than 5 years on a farm. The study could not determine the cause of this difference, but one possibility is that newer workers may perform different job tasks associated with greater levels of exposure to dust.

The investigators note that future studies should look at specific farmworker exposures to dust and their relationship to respiratory symptoms. In addition, training and education is a critical part of disease prevention among this group of susceptible workers. Already, the study has led to a websiteexternal icon for educational resources and publications. Since 2015, more than 3,700 people have downloaded resources from the website. The study’s findings also have informed advisory groups for the Kentucky Thoroughbred Association/Kentucky Thoroughbred Owners and Breeders and outreach groups working to improve safety among Latino thoroughbred farmworkers.