Risk factors for cardiovascular disease (diseases that affect the heart and blood vessels and include stroke) vary considerably by occupation according to a new study by NIOSH and the University of Alabama at Birmingham. Although previous research looked at cardiovascular disease risk among U.S. workers, the current study is the first of its kind. Investigators comprehensively analyzed biometrics, or clinical measures, and behavioral risk factors in a national sample of workers employed across a wide range of occupations, which they report in a paper published in the American Journal of Preventive Medicineexternal icon.

For this study, participants included workers aged 45 years and older (the fastest growing segment of the U.S. workforce) participating in a national study of heart disease and stroke, known as REGARDS, or the REasons for Geographic and Racial Differences in Stroke. As part of that study, investigators published information about cardiovascular disease and related risk factors for 6,282 workers. Using computer-assisted telephone interviews, self-administered questionnaires, and clinical exams, they obtained information about heart disease and stroke, as well as seven risk factors: (1) elevated blood sugar, (2) elevated blood cholesterol, (3) high blood pressure, (4) elevated body mass index (BMI) or height-to-weight measurement, (5) poor diet quality, (6) inadequate physical activity, and (7) smoking. For each study participant, investigators categorized the risk factors as ideal, intermediate, and poor, according to criteria from the American Heart Association. 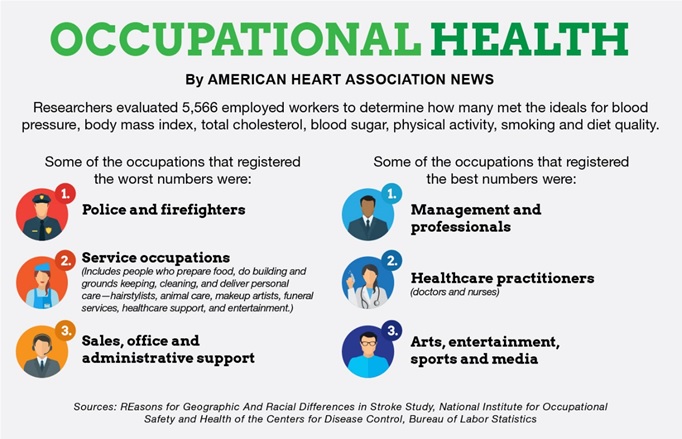 Risk factors for cardiovascular disease vary considerably by occupation, according to a new study. Image courtesy of the American Heart Association. 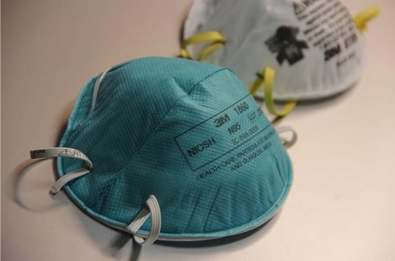 Respirators like the NIOSH-approved N95 respirators pictured above can help protect workers by filtering at least 95% of potentially dangerous airborne particles. Photo from CDC/Debora Cartagena.

Respirators reduce exposure to harmful airborne substances, but most farm operators who manage a farm’s day-to-day activities do not wear them, according to a new NIOSH study in the Journal of Agromedicineexternal icon. The study highlights the need for more education about respirator use among these workers.

Respirators cover the nose and mouth to filter dust, mold, and other substances in the workplace that can cause breathing problems. Although the best protection is to remove these substances entirely from the air, that is not always possible, especially in agricultural settings. Respirators like the NIOSH-approved N95 respirator, however, can help protect workers by filtering at least 95% of potentially dangerous airborne particles and are a critical part of personal protective equipment.

To estimate respirator use and associated factors among U.S. farm operators, scientists analyzed results from a nationwide survey conducted by the U.S. Department of Agriculture’s National Agricultural Statistics Service on the request of NIOSH. This 2011 telephone survey included 11,210 active farm operators, or their partners, who voluntarily answered questions about their respirator use in the past 12 months. The survey also included questions about asthma status, pesticide use, age, marital status, sex, smoking status, geographic region, and farm sales, type, and acreage. It did not collect information on specific circumstances requiring a respirator, such as the type of pesticide used when farm operators wore one.

Commercial fishing is one of the most dangerous jobs in the United States. The U.S. southern shrimp fleet is more dangerous than other fleets due to the hazard of entanglements in deck machinery, often in deck winches. Shrimp fishermen use two types of deck winches on their side-trawl vessels. Main deck winches are the larger of the two and are typically driven mechanically from the boat engine. Shrimp fishermen also use a “try-net” winch, which is electrically driven and deploys a smaller net used to gauge the quality and quantity of the catch going into the main nets. Each type of winch uses spools of wire rope to deploy and retrieve the nets.

In the current study, NIOSH engineers looked at both types of deck winches to develop safety interventions that could reduce the occurrences and the severity of injuries from winch entanglements. After identifying the three most common main winches in the U.S. southern shrimp fleet, three stationary guards were designed and built that fit over the main winches. Shrimp boat owners and crews fishing in the Gulf of Mexico collaborated with NIOSH to test the guards at sea. Those test results were used to improve future prototype designs.

For the try-net winch, electrical controls are typically mounted where the deckhand can reach them while standing but are out of their reach if they were to become entangled in the winch. NIOSH engineers designed an Auxiliary Stop system, reachable to an entanglement victim, to stop power to the winch motor in an emergency. Tests of this device are also currently underway.

An unprotected winch, left, and the same winch outfitted with a stationery guard, right, to prevent entanglement. Photo from NIOSH. 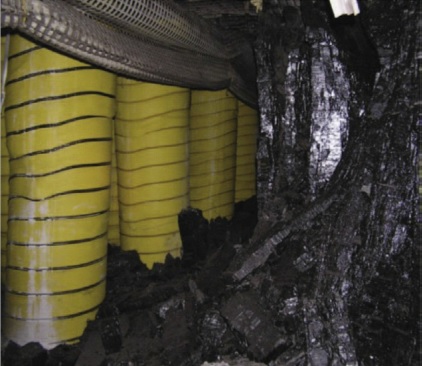 Pumpable roof supports, shown above in an underground coal mine, stabilize the mine roof to prevent collapse during coal removal. Photo from NIOSH.

Underground coal mines have used two types of pumpable roof supports for the past 20 years; however, little is known about differences in performance between the two main types. From the outside, the supports may look similar, but, on the inside, they differ considerably depending on what type of cement is used to fill them. Two types of cement are commonly used, one of which is calcium-based, while the other is limestone and clay-based.

To compare the differences between supports filled with the two different cements, NIOSH investigators tested pumpable roof supports more than 160 times over 7 years in the NIOSH Mine Roof Simulator. Located in Bruceton, Pennsylvania, the simulator provides a safe and controlled environment that mimics the conditions of an underground coal mine, including the thousands of pounds of load taken up by the roof supports once coal is extracted. The tests showed that the calcium-based cement was significantly stiffer compared to the limestone and clay-based cement, according to the study published in the International Journal of Mining Science and Technologyexternal icon. Both types of cement decreased in strength as the load increased and they began to crack, which often occurs with brittle cements. Up to a point, the bag contains the cracking material and the support can still bear significant weight. Eventually, however, an increasing load will cause the surrounding bag to tear, which leads to a rapid decrease in the pumpable support’s strength. Accordingly, the investigators now plan to study supports using less brittle materials than the two standard cements.