Q: What is the risk to workers near sand movers?

During the process known as hydraulic fracturing, workers use special equipment that injects fluid under high pressure into a drilled well to break apart the rock formation and release the oil and gas. Typically, the fluid primarily contains water, sand or a similar substance, and treatment chemicals. Using pressurized air to transfer sand from delivery trucks into sand movers generates RCS, which then disperses into the air.

Q: What is the NIOSH mini-baghouse and how does it work?

The initial design concept incorporates high-efficiency filtration. It exploits energy used to blow the sand into the sand mover, which creates the dust, and so uses no additional power such as a diesel engine. It is a low-cost, bolt-on retrofit for existing machinery, making it ideal for the thousands of machines operating on hydraulic fracturing sites.

Next, we plan to enhance the performance of the NIOSH mini-baghouse with several engineering improvements to the clamping mechanism, filter fabrics, sealing surface, and material measurements. After that, we plan to evaluate the new and improved NIOSH mini baghouse in the field and then commercialize and license the technology to industry. 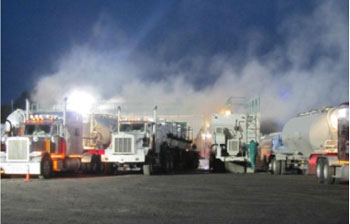 Clouds of dust are visible as sand trucks are unloaded at a hydraulic fracturing site. Photo courtesy of Michael Breitenstein, NIOSH. 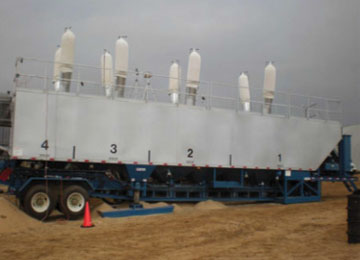 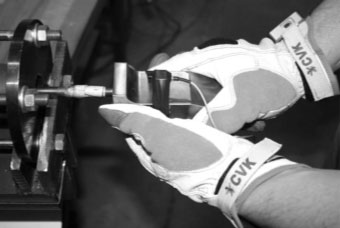 Scientists developed an apparatus and a laboratory-based methodology to simulate a riveting task to measure bucking bar vibrations. Photo from NIOSH.

When considering aircraft worker safety, the most visible jobs—pilot, air traffic controller, security screener—often come to mind. In truth, however, worker safety begins long before takeoff. During aircraft construction and maintenance, workers attach layers of sheet metal to airframes using hand-held tools called bucking bars. Used with air-powered riveting hammers, bucking bars enable workers to set rivets into predrilled holes in aircraft and other products. The problem is that bucking bars, like most powered hand tools, transmit vibrations, which increase the risk of injuries and disorders to the blood vessels, nerves, muscles, and bones of the hands. Although manufacturers have introduced new types of bucking bars designed to reduce risk, their effectiveness is unclear because there is no standardized method to measure their transmitted vibrations.

Recognizing this need, scientists at the National Institute for Occupational Safety and Health (NIOSH) recently developed and tested a lab-based riveting simulator that mimics the conditions observed during actual riveting tasks. The riveting simulator delivers reliable and repeatable forces to a bucking bar when measuring vibrations transmitted to the hand. With this new apparatus and laboratory method, NIOSH scientists evaluated three traditional steel rivet bucking bars and six newer bucking bars. Specifically, the newer designs included three bucking bars made from tungsten and three bucking bars with a mechanism designed to decrease vibrations. To compare to typical riveting tasks, the scientists also tested the bucking bars during three such tasks at a large aircraft maintenance facility. 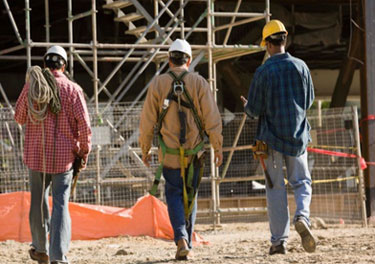 NIOSH investigators found that that the highest rates of airway obstruction were in jobs related to installation, maintenance, and repair; construction; and oil and gas extraction. Photo from Thinkstock.com.

Airway obstruction, which can signify lung diseases such as asthma or chronic obstructive pulmonary disease (COPD), was more common among workers in construction and oil and gas extraction than in other industry, investigators at the National Institute for Occupational Safety and Health (NIOSH) reported after analyzing results from a nationwide survey. These findings underscore the importance of monitoring the lung function of workers in high-risk jobs.

A major contributor to disability and death, lung disease is the third-leading cause of death in the United States. Although lung diseases such as asthma and COPD have genetic influences, hazardous occupational and environmental exposures have important causative roles. Consequently, preventing these exposures can help to prevent disease. Previous research has suggested that workers in certain jobs with exposure to vapors, gases, dust, and fumes are more likely than other workers to develop airway obstruction. Non-occupational exposures such as tobacco smoking, exposure to secondhand tobacco smoke, and exposure to other forms of air pollution can also increase risk. Research identifying work-related factors in airway obstruction is vital to better recognize this risk, enable those who already have the disorder to receive treatment, and prevent future cases.

To identify jobs and other factors that increase the risk of airway obstruction, NIOSH investigators analyzed data from the 2007 to 2008 National Health and Nutrition Examination Survey (NHANES). Their analysis included 4,172 working adults between the ages of 18 and 79 years, who voluntarily provided results of a test, called spirometry, which measures the ability to blow air out of the lungs. Nearly half of participants were female, and 47% were white, 20% were black, and 18% were Mexican American. 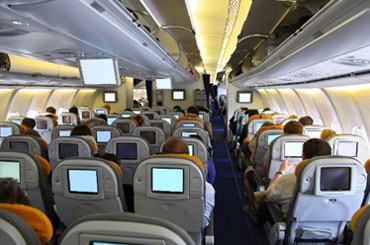 A new study by NIOSH and federal partners found that former flight attendants were significantly more likely to die of the disease ALS, or amyotrophic lateral sclerosis, compared to people in the general population. Photo from Thinkstock.

Flight attendants often have the opportunity to travel the world, but working on aircraft may increase certain health risks. Last year, a study from the National Institute for Occupational Safety and Health (NIOSH) found that pregnant flight attendants might be at higher risk for miscarriages. A new study by NIOSH and federal partners has found that former flight attendants were significantly more likely to die of the disease ALS, or amyotrophic lateral sclerosis, compared to people in the general population. It is important to note, however, that this was an observational study, which shows only associations, not causes.

Also called Lou Gehrig’s disease, ALS involves progressive deterioration, or neurodegeneration, of nerve cells in the brain and spinal cord that control voluntary movement. The cause of ALS is unknown, although environmental factors may play a role in some cases.