New Technique Brings Silica Monitoring to the Mine

Silicosis is an irreversible, but preventable, occupational lung disease caused by exposure to respirable silica dust. At the National Institute for Occupational Safety and Health (NIOSH), investigators study how to prevent exposure to silica dust among miners and other workers. Recently, they developed a novel technique that makes it possible to measure silica dust quickly and easily at the mine site. We asked study lead author Emanuele Cauda, Ph.D., NIOSH senior service fellow, to explain the technique and its benefits. 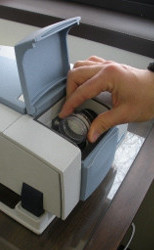 The portable instrument with the sampling cassette, pictured, measures silica concentrations in less than 1 minute. Photo from NIOSH

A:  Avoiding silica exposure is a special challenge for miners. To monitor that exposure and create the best control intervention, health and safety managers at mines periodically take dust samples to check for silica levels. They have a single, pressing question: “What are the silica concentrations in these samples?” Having a quick answer would allow mines to take immediate action to reduce high dust concentrations. Currently, however, mines must send the dust samples off for analysis and wait 1–3 weeks for the results. Also, the conditions and dust concentrations in mines are constantly changing, so by the time the results arrive, the mine might not be able to take effective action. We need a better way to protect miners’ health.

Q: How does the new technique work?

A: At NIOSH, we have developed a new monitoring approach that builds on the existing sampling devices commonly used by health and safety professionals in mines. First, we take a dust sample in the mine. Then we remove the sampling cassette and place it in a small, portable instrument. The instrument uses an infrared technique, based on NIOSH-developed models, to measure the silica in the sample in less than 1 minute. This way, we get quick results right on-site in the mine. Also, the mine benefits financially in the long run by making the initial investment in a reusable instrument, rather than paying each time a sample is sent for analysis.

A: We are currently testing several commercially available portable instruments for this approach. After testing more than 350 samples collected in both coal and non-coal mines, we know the technique works, but we need to optimize it. First, we need to refine the analytical technique for samples that contain different minerals together with silica. Second, we need to optimize the physical fit between the sampling cassette and the portable instruments. Finally, we’re developing software to interface with the different commercial portable instruments and to ensure accurate quantification and calibrations of the measurements.

We are very excited about the potential health benefits from this approach. Now, what we really need is more mines participating with us in field studies, so we can optimize the technique with input from future users. We would be grateful if mine operators and health and safety managers could contact us to talk about how we can work together to help protect workers from silica exposure diseases.

Engineered nanoparticles have unique size-driven properties that can affect their physical, chemical, and biological behavior. Because of the physical-chemical properties at the nanoscale, silver nanomaterials are being used in an increasing number of products. These products include consumer goods, such as electronics and textile coatings, and antibacterial items for medical use. With increased use, however, comes the possibility that growing numbers of workers may be exposed during the manufacture and use of the materials. In keeping with our leadership role in evaluating and assessing whether workers exposed to nanomaterials are at risk, the National Institute for Occupational Safety and Health (NIOSH) recently evaluated the available literature on silver and nanosilver to determine if there is sufficient evidence for a size-specific recommended exposure limit (REL).

Published information on workers’ exposure to silver is limited but indicates that workplace airborne concentrations can exceed recommended limits without good risk management practices, such as using engineering controls. These limits include the current Occupational Safety and Health Administration (OSHA) permissible exposure limit (PEL) and the NIOSH REL of 10 µg/m3. Long-term exposures have been noted to cause localized and generalized argyria, which is an irreversible bluish-gray pigmentation of the skin. NIOSH also evaluated laboratory studies that demonstrated possible lung and liver effects, but these were of uncertain clinical significance when extrapolating study doses to humans.

After evaluating the available scientific evidence, NIOSH has determined that it is insufficient to support developing a size-specific REL for silver nanomaterials. In the absence of information to support a size-specific REL, worker exposures to silver dust, fume, and soluble compounds should be maintained below the NIOSH REL of 10 µg/m3 as an 8-hour time-weighted average. 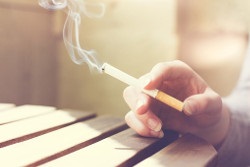 One of the main objectives of the national Healthy People 2020 program is to reduce cigarette smoking in the general population to 12% or less. For this study, investigators analyzed 2008 to 2012 data from the National Health Interview Survey and found that 16% of the approximately 19 million workers in healthcare and social assistance reported current cigarette smoking. The jobs with the highest smoking rates were record keeping, scheduling, dispatching, and distributing, with slightly more than one-third of workers reporting that they currently smoke. The second highest rates were among workers in nursing, psychiatric, and home health aides occupations, with just over one-fourth reporting that they currently smoke.

Although the occurrence of smoking is higher among men than among women in the general U.S. working population, this study found that the occurrence was higher among women. This finding could stem from the disproportionately high number of women (80%) working in the health care and social assistance sector. In findings similar to those of other studies, smoking was also most prevalent among workers between the ages of 25 and 44 years, who earned less than $35,000 per year, and who had no health insurance. 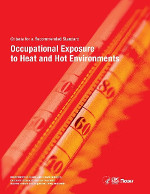 In the 30 years since the National Institute for Occupational Safety and Health (NIOSH) made major recommendations to prevent work-related heat stress, recent events have raised questions about working safely in hot environments. For example, during the Deepwater Horizon response and cleanup of 2010, crews worked through the hot Gulf of Mexico summer. That event, and the evaluation of accumulated research and literature characterizing effects of working with heat stress, prompted NIOSH to revise its guidance document Criteria for a Recommended Standard: Occupational Exposure to Heat and Hot Environments after an extensive scientific review. Although the recommended alert and exposure limits still protect workers in hot environments and remain unchanged, the revised document includes updated research findings, training, and intervention tools.

Working in hot environments—both outdoors and indoors—increases the risk of heat stress, which can cause injuries, disease, reduced productivity, and even death. To continue to protect workers from this serious work-related hazard, NIOSH investigators collaborated with other scientific experts, partners, and the public, through a request for comments and peer review, to revise the criteria document.

The finalized document includes guidance for safety and health professionals and employers, describing methods to protect workers from heat stress. These methods include medical monitoring; acclimatization; a recommendation of drinking 1 cup (8 oz.) of water or other fluids every 15–20 minutes; and differentiating between the symptoms of classic and exertional heat stroke. In classic heat stroke, sweating is usually absent, but in exertional heat stroke, sweating often occurs. Exertional heat stroke is more likely to occur in workers, so it is particularly important to re-educate workers who may have incorrectly learned that heat stroke occurs only without sweating. New training tools include a urine color chart, which is a good indicator of hydration status, and occupation-related case studies. As NIOSH continues to study this evolving area of workplace safety and health, possible subjects for future research are the effects of climate change on workers and of heat stress on chemical absorption in the body.