Surveillance is the First Step in Prevention: The FOG Database for Oil and Gas Extraction Workers

Understanding how, why, and to whom a fatal work-related injury occurs is an early step in preventing further deaths. To further that understanding and the prevention of work-related fatalities, a new database at the National Institute for Occupational Safety and Health (NIOSH) collects detailed information about fatal events in the U.S. oil and gas extraction industry. The Fatalities in Oil and Gas Extraction (FOG) database provides researchers, industry safety and health professionals, and other stakeholders with critical information for targeted prevention efforts.

NIOSH developed and began populating the FOG database in 2013. The next year, the institute published its first FOG report, which identified the assembly and disassembly of drilling or well-servicing rigs as the types of operations most commonly associated with fatal events. The FOG database also helped to identify and describe a previously uncharacterized hazard in the oil and gas extraction industry: fatalities associated with breathing dangerous hydrocarbon gases or vapors. By identifying this and other trends, the FOG database informs research aimed at protecting oil and gas extraction workers.

The FOG database includes work-related fatalities among land-based and offshore oil and gas extraction workers in the United States, as well as fatalities among workers in other industries who were working in the oil and gas extraction industry at the time of death. Information sources for the database include the Occupational Safety and Health Administration, other government agencies, media alerts, and professional contacts. NIOSH will continue to collect and analyze data contained in the FOG database and will share identified trends to prevent additional fatalities in the industry.

For more information, visit Fatalities in the Oil and Gas Extraction Industry. 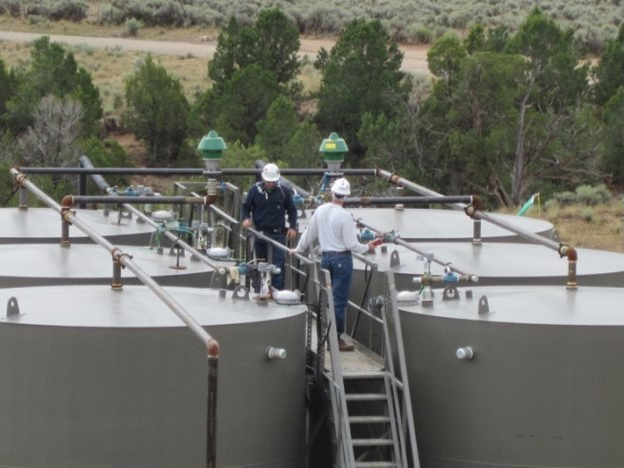 Workers inspect oil production tanks. Photo from NIOSH
In This Issue
NIOSH Research Rounds is Brought to You By:

*Non-traditional commutes include workers traveling as a crew, with a paid driver, or long distances (>90 minutes or >50 miles each way).

During the 2010 Deep Water Horizon oil spill, clean-up workers reported symptoms such as breathing difficulty, headache, and nausea and the health effects associated with mixed exposure to crude oil, dispersant, and combustion products were unknown. From existing data, we don’t know whether or to what extent the symptoms were associated with emissions from the crude oil itself, how long they might persist, and whether these acute symptoms signal risks for other effects that may take years to become apparent These are important questions for protecting responders in any future, large-scale emergencies like Deep Water Horizon, for monitoring long-term risk from past exposures, and for understanding the implications for workers who may be exposed to airborne emissions from crude oil in extraction and production.

To fill this critical knowledge gap, researchers at the National Institute for Occupational Safety and Health (NIOSH) launched the first study of its kind to investigate the health effects of breathing in unrefined (crude) oil. Crude oil releases potentially toxic gases and vapors into the air, posing the risk of inhalation. To study the health effects of these gases in controlled laboratory experiments, researchers developed an innovative system that can generate the same type of gases generated during some oil and gas operations. They hope that their findings, expected later this year, will encourage more research in this under-studied area that, ultimately, will lead to improved understanding of potential hazards and protection for oil workers.

In a separate but related project, NIOSH researchers also are using controlled laboratory experiments to study the potential health hazards of combined occupational exposure to two air contaminants in hydraulic fracturing (“fracking”) operations: silica dust and diesel exhaust. Silica dust may be generated from moving, transporting and refilling thousands of pounds of sand onto and through sand movers in hydraulic fracturing operations, and diesel exhaust is emitted by the generators used to power the equipment used in these processes. Diesel particulate matter has been classified as a possible carcinogen by both NIOSH and the Environmental Protection Agency. (EPA). Silica dust poses an occupational risk for the serious, irreversible lung disease silicosis, and epidemiologic studies indicate that occupational exposures are also associated with an increased risk of developing lung cancer. As the first study of its kind to examine the combined effects of these substances, this research fills a critical gap in our knowledge. The researchers expect to share the results of these investigations sometime next year. 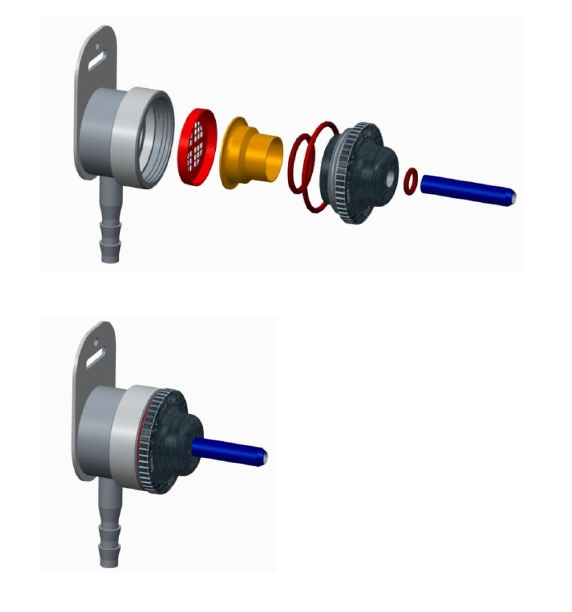 The NIOSH tool expanded (top) and assembled (bottom). The NIOSH-developed rotating nozzle is in blue. Figure from NIOSH.

From 1986 to 2010, 10 deadly explosions occurred in underground coal mines in the United States. The risk of explosion involves an interrelated chain of events. A source of heat (such as a spark) ignites methane gas in the air of the coal mine tunnel. The sudden pressure created by that blast stirs up deposits of coal dust from mine surfaces. Those combustible particles, now airborne, catch fire too and propagate the explosion with devastating force. Ignition sources, methane, and coal dust all must be controlled to avert risk. Applying large amounts of incombustible limestone dust to mine surfaces, to reduce the risk of airborne coal dust igniting, is one of those control techniques.

Addressing this problem, researchers at the National Institute for Occupational Safety and Health (NIOSH) developed an inventive technique by modifying a tool called the inhalable dust sampler (IOM sampler), created at Scotland’s Institute of Occupational Medicine. NIOSH researchers fitted the IOM sampler with additional parts, including a stainless-steel filter cassette and inlet. In the laboratory, they then evaluated this new tool’s ability to measure airborne coal dust in the presence of rock dust, using samples with known quantities of both types of dust. After obtaining correct measurements in the laboratory, the researchers accurately measured the amount of coal dust in airborne dust samples collected after rock dusting in an underground coal mine. They plan to use this technique in future underground mine studies to test the effectiveness of coal dust controls such as scrubbers and water sprays.

To read the article in the Journal of Occupational and Environmental Hygiene, go to Sampling and Analysis Method for Measuring Airborne Coal Dust Mass in Mixtures with Limestone (Rock) Dustexternal icon.

To learn more about NIOSH research on coal dust measuring and prevention of coal mine explosions, visit Rock Dusting and Coal Mine Explosion Prevention.

The photo on the left shows rock dust deposits on the roof, ribs, and mine floor at a field sampling location in a continuous miner air-venthilation return. On the right, a worker measures the deposits. Photos from NIOSH.