A new study at the National Institute for Occupational Safety and Health (NIOSH) underscores the importance of anticipating respiratory disease, including black lung disease and loss of lung function, in former coal miners to allow them to receive an appropriate diagnosis and medical care. The study also shows the importance of reducing exposures to coal mine dust, which puts current miners at risk for this serious work-related illness. Black lung disease is also known as pneumoconiosis.

In the current study, NIOSH investigators compared results from the program’s testing of active and former coal miners in Alabama, Illinois, Indiana, Kentucky, Pennsylvania, Virginia, and West Virginia. They found that former miners were significantly more likely than current miners to have signs of black lung disease on x-ray imaging and impaired lung function on spirometry tests. The increased rate of disease among former miners persisted even after controlling for other possible causes, such as length of time spent mining, smoking, and body-mass index, or weight relative to height. On average, these former miners had not worked in the mines for 14 years. These findings indicate that black lung disease continues to be a serious public health problem in the United States that affects not only current miners, but also former miners.

Irreversible and potentially deadly, black lung disease can take years to develop. It is also preventable by avoiding inhalation of coal mine dust. Yet, despite increased awareness that controlling dust in coal mines can protect miners, the overall rate of black lung disease has significantly increased over the past 16 years. Recently, NIOSH expanded its nationwide Coal Workers Health Surveillance Program, which provides free lung screenings to coal miners. Formerly, only underground coal miners were eligible for the lung screenings, which are offered about every 5 years. The expanded program gives access to these screenings to all coal miners, including underground and surface miners, as well as those who work as mining contractors. The screenings include chest x-rays for black lung disease and a test for lung function called spirometry.

NIOSH encourages all active coal miners to participate in the Coal Workers Health Surveillance Program and to monitor their respiratory health. NIOSH also encourages former miners to share their occupational histories with their healthcare providers.

To read the journal article, go to Comparative Respiratory Morbidity of Former and Current US Coal Minersexternal icon.

If you watch or read the news, you may have seen images of healthcare providers covered head to toe in bulky garments as they treat hospital patients who have a contagious disease. During disease outbreaks, these garments, collectively called a personal protective equipment (PPE) ensemble, play a critical role in public health. PPE ensembles protect wearers from job-related exposure to disease-causing germs. They also reduce the risk that healthcare workers will become infected while treating seriously ill patients and further spread a contagion.

The problem is that PPE ensembles can also hinder the worker’s movement and comfort, particularly in extreme weather conditions, such as excessive heat. Previous research has shown that these effects can decrease physical performance and increase the risk of other injuries, like overexertion and slips, trips, and falls. Now, a new 3-year study at the National Institute for Occupational Safety and Health (NIOSH) will evaluate the precise ways that PPE might put stress on the body and, subsequently, affect comfort and job performance.

Depending upon the type of exposure, a variety of PPE options are suitable for healthcare workers, according to the Occupational Safety and Health Administration. The new NIOSH study will evaluate a PPE ensemble commonly used to protect wearers from occupational exposure to germs, such as Ebola, which have a high risk for causing serious or fatal disease. The PPE ensemble includes several elements:

Areas investigated will include the PPE ensemble’s effects on walking ability and postural balance, as well as heart rate, body temperature, hydration, and inflammatory responses. The study’s long-term goals are to develop safety guidelines, such as how much rest someone needs when wearing PPE in various environments. Ultimately, the findings could lead to improved PPE design and safe work practice for healthcare workers. Voluntary enrollment of healthcare workers to participate in the study begins in 2016.

Life sometimes imitates art, but does science? Perhaps, at least at the National Institute for Occupational Safety and Health (NIOSH). Researchers are using a newly developed headform—a life-size, life-like replica of the human head and face—to advance the science of respiratory protection for workers.

When workers wear respirators on the job to keep from breathing harmful airborne contaminants, the respirator must be tightly sealed to the face to provide the respirator’s expected level of protection. NIOSH researchers used silicone, a highly flexible, synthetic material, to simulate the naturally occurring differences in skin thickness found on the human face to create a remarkably accurate—and eerily life-like—image. Using a database of high-tech computer scans that showed head/face size measurements of people, researchers were able to create composite images of representational head/face sizes of the U.S. workforce. The 3D composites were then used to develop the physical headform models.

NIOSH developed the headform as a research tool to determine whether laboratory studies on facepiece fit could be performed without human subjects. Using the headform as a substitute could be better in certain situations. For example, using headforms could save time and cost in recruiting volunteer human subjects. Using headforms could also advance studies in which researchers want to study respirator fit using actual toxic materials. For human subjects, researchers traditionally use harmless surrogate aerosols, under controlled lab conditions. But using headforms raises a question. How would results from respirator fit studies using a headform compare to results from studies using human subjects?

In a study addressing that question, investigators measured the fit of eight different models of NIOSH-approved N95 filtering facepiece respirators on volunteers that included five men, ages 23–63, and five women, ages 22–54. A non-toxic aerosol (sodium chloride) was used. Investigators did three series of fit tests using the different respirators. Each fit test involved three different 2-minute exercises: breathing normally, breathing deeply, and then breathing normally again. When researchers grouped and analyzed all fit test data from all respirator models, they found a strong relationship between the fit test results from the headform and those from the study participants. The respirator models that did not fit as well on the study participants also did not fit as well on the headform. The models that fit well on the study participants also fit well on the headform. These results are an important first step to verify whether the headform would be a reliable stand-in for people to better understand the factors that contribute to respirator fit.

For more information about respirators, visit For Respirator Users.

To read the full journal article, go to Correlation of Respirator Fit Measured on Human Subjects and a Static Advanced Headformexternal icon. 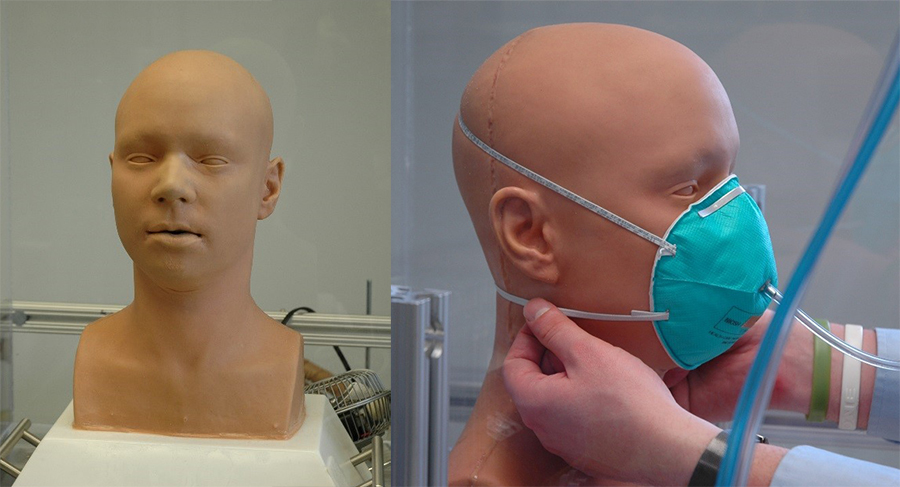 NIOSH investigators and outside partners developed this silicone headform and showed that respirator fit can be achieved in a range similar to fit on people. Photos from NIOSH/National Personal Protective Technology Laboratory.

Training, Communication, and Other Improvements Recommended After Fire Fighter Death

Fire investigators at the National Institute for Occupational Safety and Health (NIOSH) have recommended training, communication, and other improvements to a Maryland fire department after the recent death of a shift safety officer.

After a fire on November 12, 2014, a 62-year-old shift safety officer fell through a hole in a floor to the basement of an abandoned row house he was inspecting. Although some fire fighters had noticed the hole, they did not report it. No one knew the safety officer was inside the building, and he died of smoke inhalation, rather than from injuries related to the fall.

Based on the investigation, NIOSH recommended changes in several areas, including training and communication:

NIOSH independently investigates select fire fighter deaths under its Fire Fighter Fatality Investigation and Prevention Program. This investigation involved meeting with representatives from the fire department and the Maryland Department of Labor, and photographing and measuring the row house. Investigators inspected the fire fighter’s personal protective equipment and clothing, and they sent his breathing apparatus, fire helmet, and radio to a NIOSH lab for further evaluation. They also studied the fire department’s training records and interviewed about 50 of the fire responders.

To read the recently published report and the complete list of recommendations, go to Shift Safety Officer Falls Through Hole in Floor Into Basement of Vacant Row House and Dies From Smoke Inhalation—Maryland.