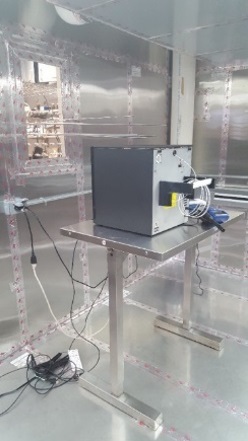 NIOSH investigators tested the desktop 3D printer in the special chamber, above, which simulates real-world conditions. Photo from NIOSH

An industrious college student recently made the news for straightening his own teeth with braces that he made on his school’s three-dimensional (3D) printer. From braces, hearing aids, and prosthetics, to military equipment, the list of products that 3D printers can make relatively easily and cheaply continues to expand. As with all new technologies, however, it is important to identify and address potential workplace health and safety risks.

To understand how 3D printing works, picture plastic Lego blocks, which snap together to form all kinds of elaborate 3D structures. Similarly, the most common type of desktop 3D printer technology joins thin strands, or filaments, made of plastic or natural materials, such as corn. Following a computer-generated image, the 3D printer uses heat to melt and place layers of filament on top of one another to form a precise 3D replica of the image.

As desktop 3D printers become more affordable, they are used more often in offices, public libraries, colleges, and even private homes. Most of these settings do not have controls, like ventilation, to prevent or minimize exposure to emissions. The following two articles describe NIOSH research aimed at understanding and controlling emissions from desktop 3D printers.

Previous studies showed that laser printers emit microscopic particles and chemicals from the printers themselves, the paper, and the plastics used in the toner. NIOSH investigators continue to study the possible health effects related to these particles and wanted to find out whether 3D printers have similar emissions.

Working with university partners, NIOSH investigators measured emissions from a desktop 3D printer in a specially designed test chamber that simulates real-world conditions. They found that the tested desktop 3D printer released high numbers of particles as it printed. The emissions peaked a few minutes after printing began, and they did not return to baseline until about 100 minutes after printing ended.

The emissions also varied by filament type and color. Filaments made from natural materials like corn emitted smaller particles than plastic filaments did. This could be because the oil-based plastic particles were more likely to form clumps, according to the investigators. Calculations showed that the risk of the particles lodging in the lungs was 3 times higher for the small particles made from natural substances compared with the larger plastic particles. Color also affected particle size, with natural corn-based filaments in the color true red emitting the smallest particles, on average. In contrast, blue plastic filaments emitted the largest particles.

Investigators found that using the manufacturer-supplied cover on the printer decreased the number of particles by two times, but the reduced number was still high. These findings underscore the importance of using controls to reduce emissions from desktop 3D printers in non-industrial settings. To reduce emissions, the investigators recommend five specific steps:

The peer-reviewed Journal of Toxicology and Environmental Health published the study.

In a related, ongoing study, investigators found that a desktop 3D printer emitted smaller particles than those from laser printers that use plastic toner and far greater amounts of certain chemicals linked to asthma. In what they believe is the first discovery of its kind, the investigators also found that 3D printers emit chemicals that combine to form new compounds, including a chemical linked to asthma. These findings, like those of the preceding study, suggest the need to take precautions to reduce emissions from desktop 3D printers in the home and office.

Laser printers produce images or text on paper by using heat to melt toner powder, which is composed of carbon, plastic, and metals such as iron. To compare emissions between 3D and laser printers, the investigators measured emissions from both types of printers in a testing chamber that simulates real-world conditions. They measured the emissions before, during, and after printing. The investigators presented a poster describing preliminary results at a recent American Industrial Hygiene Conference and Exposition Graduate Student Poster Session. They are also completing a manuscript describing their findings, which they will submit to a peer-reviewed journal for publication.

This summer, the investigators plan to use the data from this study to identify the laser printer that emits the greatest amount of particles and asthma-related chemicals. Once they do that, they plan to study the influence of different factors, such as toner and paper type, on emissions from the printer.

Falls are among the most common causes of injury in the workplace. They can lead to severe injury, even death, but—with the proper precautions—they can be prevented. Without the proper precautions, same-level falls can occur during the simple act of walking, while falls to a lower level can occur from a ladder, scaffolding, roof, or other structure above the ground. NIOSH investigators take a multifaceted approach to identify the risk factors for falls, and, ultimately, to develop preventive measures.

With these rich details, the investigators plan to highlight differences in injury rates between worker groups and understand whether employer participation in the grant program for safety intervention affects injury rates. The grant program is one of many programs, services, and resources that the bureau offers to employers for beginning safety interventionsexternal icon. To receive funding for the program, employers go through a competitive application process. After completing their data analysis, the investigators plan to submit their findings to a peer-reviewed journal and ultimately help Ohio employers prevent fall injuries.

To form a comprehensive picture of workers at greatest risk for ladder falls, NIOSH investigators analyzed three nationwide occupational injury surveillance systems. They presented their findings in a Centers for Disease Control and Prevention Morbidity and Mortality Weekly Report. They found that ladder fall injuries were significantly higher among Hispanics, self-employed workers, and those employed by small companies. They were also higher among men, older workers, and construction workers. To help prevent ladder fall injuries, NIOSH has developed a technologically innovative Ladder Safety App. Available in English or Spanish on the NIOSH website, the app provides user-friendly guides and interactive tools to prevent major causes of falls related to extension and stepladders.

Comprehensive Intervention Leads to Decline in Slips, Trips, and Falls

In three hospitals that began a fall-prevention plan developed by NIOSH and hospital staff, injuries from falls on the same level declined by more than half. These types of falls are commonly called “slips, trips, and falls.”

NIOSH investigators and hospital staff developed the prevention planpdf icon after analyzing 10 years of Workers’ Compensation data to identify the most common causes of fall-related injuries. Although different jobs may require different interventions, these results show that tailoring an intervention to a specific group, such as healthcare workers, can help decrease slips, trips, and falls.

The investigators have described their findings in a book chapter as part of an extensive, collaborative textbook, Fall Prevention and Protection: Principles, Guidelines, and Practices. The textbook will be published later this year.

Last month, NIOSH and its partners asked construction workers and employers to take part in the second National Stand-Down to Prevent Falls in Construction. This event calls for work to pause so workers can focus on activities to prevent falls. The National Stand-Down to Prevent Falls in Construction happens once a year, but NIOSH works year-round to understand the causes of falls, and how to prevent them, in all industries that experience this serious risk.

The images above are from the NIOSH Aerial Lift Hazard Recognition Simulator and show different work environment scenarios for users to navigate.

Aerial lifts are a type of widely used equipment that increases the risk of falls if precautions are not followed. These powered, mobile platforms often replace stationary scaffolding to elevate workers to various heights. They can be found in many industries, including construction, warehousing, and general building maintenance. In addition to their mobility, aerial lifts require minimal setup time and can reach substantial heights. For these reasons, aerial lifts are growing increasingly popular in various industrial jobs, such as painting, tile and drywall installation, and maintenance. The problem is that some of the same attributes—mobility, high elevation—that make aerial lifts so useful can increase the risk of falls, especially with improper training and use, and failure to follow manufacturer recommendations.

To prevent falls, NIOSH studies data from workplace falls to identify common hazards that increase risk. In one study, NIOSH investigators examined data from three databases, including the Census of Fatal Occupational Injuries, NIOSH Fatality Assessment and Control Evaluation reports, and Occupational Safety and Health Administration (OSHA) Incident Investigation Records. After analyzing the records, they found that most falls, collapses, and tip-overs related to aerial lifts occurred when the lifts were extended from 10- to 29-feet high. Constructing and repairing activities were most commonly associated with falls, collapses, and tip-overs.

Based on this analysis and other studies, NIOSH recently developed an Aerial Lift Hazard Recognition Simulatorexternal icon that provides a simulated real-world workplace, complete with hazards such as potholes and overhead structures. For those of us who remember driver’s education, the simulator may seem like an advanced, high-tech descendant of the driving simulators that schools used years ago. The NIOSH simulator provides employers and workers with a valuable and realistic operator experience—all from the safety of a computer—to raise awareness of the potential hazards when using aerial lifts.

NIOSH investigators have also used computer modeling and physical experiments to test the responses of an aerial lift under different conditions, and under limits recommended by the American National Standards Institute and major aerial lift manufacturers. These tests allow investigators to identify how the lift and operators would respond to different environmental and physical impacts, including adverse operating conditions. Videos and information from the computer modeling are available on the NIOSH website.