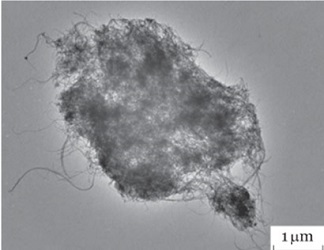 A cluster of airborne carbon nanotubes collected at a workstation. Photo from NIOSH.

Since the 1980s, the burgeoning nanomaterial field has led to a growing number of manufacturers worldwide making and using these materials in coatings, computers, clothing, cosmetics, sports equipment, and medical devices, among other items. As the word “nano” implies, these materials are extremely small, between approximately 1 and 100 nanometers in size by some definitions. Novel chemical and physical properties occur at this scale, making nanomaterials ideal for creating and manufacturing new or improved products. One of the most promising is the carbon nanotube, a nano-sized cylinder comprising either pure carbon or carbon with residual trace metal content. Available in one layer (single-walled) or many layers (multi-walled), carbon nanotubes’ unique chemical, electrical and mechanical strengthening properties make their use widespread in many materials in manufacturing, research, biomedicine, and other fields.

As with any new, rapidly expanding technology, questions about health and safety need to be resolved so that any unintended risks can be identified and addressed. The National Institute for Occupational Safety and Health (NIOSH) conducts robust research with diverse partners to better understand the occupational health and safety implications of nanoparticles and to recommend prudent strategies for controlling worker exposures as knowledge advances. The following two articles summarize two published papers by NIOSH investigators with partners at Kazan State Medical University, in Kazan, Russia, exploring whether workplace exposure to multi-walled carbon nanotubes could pose a risk for lung disease. For both studies, participants from the same facility in Kazan volunteered to participate. The findings from the studies by themselves do not answer the question of whether workplace exposure to multi-walled carbon nanotubes would result in occupational illness. However, they support the need for further research and underscore the importance of precautionary control measures.

Abnormalities in Regulation of Cell Growth and Cell Death

Workers exposed to multi-walled carbon nanotubes were significantly more likely than were unexposed workers to have abnormal changes related to various cell functions including cell growth and cell death, according to a study by NIOSH and Kazan University investigators. This study, published in the peer-reviewed journal PLOS ONE, is the first to look at these cellular changes in blood samples from workers exposed to multi-walled carbon nanotubes.

Previous animal and cell culture studies indicated that exposure to multi-walled carbon nanotubes correlated with cellular changes that may lead to a greater potential risk for lung and heart disease, as well as cancer. Now, investigators want to know whether the effects they observed in laboratory studies also might be found in the cells of workers who may be exposed to multi-walled carbon nanotubes in the manufacture and industrial use of these materials. If so, these changes may offer promise as biomarkers to flag subtle effects that could point to risk for development of work-related diseases. To examine the effects, they looked at ribonucleic acid (RNA), molecules involved in many aspects of cellular function. Investigators compared the difference in RNA expression between exposed and unexposed workers at a multi-walled carbon nanotube manufacturing plant in Russia. First, they sampled workplace air during the production of the nanotubes to determine whether, and at what concentration, workers may have been exposed to airborne particles. Next, they examined blood samples from eight voluntary participants who had directly worked with the nanotubes for at least 6 months, and seven voluntary participants who had not worked with the nanotubes at all. The blood tests showed significant changes in those who had worked in nanotube production in the expression of RNAs that control the growth and death of cells. Furthermore, the changes were similar to those that laboratory studies had linked to increased risk for chronic diseases such as lung disease, heart disease, and cancer. Since this study only had a small number of participants, large-scale studies are needed to determine whether the observed RNA changes are useful markers of exposure in workers. Additional work also is needed to determine if the effects observed are specific to the multi-walled carbon nanotubes and if this information can assist in developing good risk management practices. These findings should be considered when comparing the results from similar studies in the United States, such as an ongoing study at NIOSH, the investigators recommended.

In a related study by NIOSH and Kazan University investigators, workers exposed to multi-walled carbon nanotubes were significantly more likely than were non-exposed workers to have cellular changes that correlated with lung inflammation and scarring. These findings, published in the peer-reviewed journal Toxicology and Applied Pharmacology, underscore the importance of implementing strict control measures as a reasonable precaution to prevent exposure to workers handling multi-walled carbon nanotubes.

By analyzing blood, nasal, and sputum samples, the investigators found that workers exposed to multi-walled carbon nanotubes had significantly more changes indicating the potential for scarring and inflammation to occur than did the unexposed workers. These differences remained after controlling for other factors, such as smoking, that could affect the results. These findings show that the tests and validation of the biomarkers for exposure to multi-walled carbon nanotubes were found applicable in workers, as well as in the earlier laboratory studies. They indicate that future studies should consider using the observed biomarkers to assess the health effects of workplace exposure to multi-walled carbon nanotubes. In addition, a repository of biological samples would be a valuable tool for future studies, according to investigators.

We all need it, even crave it, but many of us find it difficult to get the recommended amount for our health: it is sleep. Healthy People 2020, which outlines the national health goals for the next decade, recommends that adults get 7 or more hours of sleep each day. After reviewing the evidence, the American Academy of Sleep Medicine, the Sleep Research Society, the National Sleep Foundation, and the American Thoracic Society all conclude most adults need 7-9 hours of sleep each day for optimum health. For some people, however, long hours or shift work—working during nighttime hours—make getting adequate sleep regularly difficult. As part of its long-standing commitment to reducing potential health and safety risks associated with demanding work hours, NIOSH studies the factors that contribute to inadequate sleep among workers and how to address them in the context of work schedules.

By organizing work schedules to allow workers enough time for adequate sleep, both employers and workers benefit, according to a recent NIOSH literature review published in the Journal of Women’s Health. Numerous scientific studies link adequate sleep to mental health, weight control, safety, and a stronger immune system. Under its Research to Practice, or r2p, initiative, NIOSH develops training and other materials for workers and employers in various industries to reduce the risks from inadequate sleep. These materials include a comprehensive online course for nurses, who often must work shift hours, and training for emergency responders on reducing risks associated with long work hours (see links below).

Work and personal demands may prevent some workers from getting enough sleep. Working women, in particular, may have jobs that contribute to inadequate sleep, the review found. In the United States, an estimated 12% to 28% of working women are on various shift-work schedules, and about 12% work more than 48 hours per week. Almost 29% of working women in the United States reported sleeping 6 or fewer hours per day, according to 2004-2007 from the Centers for Disease Control and Prevention’s National Health Interview Survey.

Studies show that inadequate sleep and disruption to circadian rhythms from shift work and long work hours are associated with many health and safety risks, including premature death, obesity, vehicle crashes, worker errors, heart disease, diabetes, cancer, and negative reproductive outcomes. Fatigue and poor mood from sleep deprivation can also lead to less quality time with family and friends. In addition, fatigue-associated errors, which could have serious consequences, can occur. To help prevent risks associated with inadequate sleep, the NIOSH website provides free materials to help employers to organize work and work schedules and workers to organize their personal lives for adequate sleep.

Healthcare workers make it their job to help others, yet face a significant risk of workplace violence ranging from intimidation to physical attacks. In fact, compared with workers in all other industries combined, healthcare workers are nearly 5 times more likely to encounter workplace violence. NIOSH strives to protect these workers by studying the causes and prevention of violence in healthcare.

As the fastest-growing sector of the United States economy, healthcare employs more than 18 million workers, most of whom are women. More than half of all nonfatal assaults in private industry occur in healthcare, usually by patients. In an ongoing study addressing this serious and persistent problem, NIOSH investigators with university and union partners are measuring compliance with the New Jersey Violence Prevention in Health Care Facilities Act, which became law in 2008; the regulations became effective September 6, 2011. The law requires healthcare facilities in the state to establish a comprehensive workplace-violence prevention program, which includes a multidisciplinary workplace violence prevention committee, written violence prevention policies and procedures that is specific to their facilities, and employee training. Although New Jersey joins several other states with similar laws, it is unclear whether the laws are effective at reducing violence against healthcare workers.

To examine the law’s effectiveness, the investigators interviewed 35 chairs of workplace violence prevention committees representing 52 hospitals (56% of all New Jersey hospitals). In the next phase of the study, investigators will conduct interviews at nursing homes in New Jersey and Virginia regarding their policies and programs aimed at preventing workplace violence. Since Virginia does not have a regulation for workplace violence prevention, data collected from that state will provide a comparison. Through this comprehensive analysis of the New Jersey law, the investigators hope to provide information on the effectiveness of the regulation’s components for other states developing laws to prevent violence against healthcare workers. This information includes the peer-reviewed paper Barriers to Effective Implementation of Programs for the Prevention of Workplace Violence in Hospitalsexternal icon and two new papers being prepared for publication later this year. The papers will focus on hospital security programs and perceptions of training programs to prevent workplace violence due to the New Jersey legislation.