Why do Some Drivers Text While behind the Wheel? 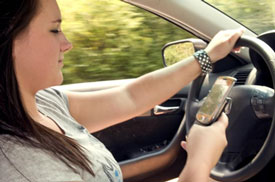 Texting drivers may prefer immediate rewards to delayed ones. Photo courtesy of the Centers for Disease Control and Prevention.

We all know that texting while driving can be extremely dangerous, even deadly. So why do some drivers still do it? Do they feel an urge or obligation to reply to a text message immediately? Do they feel a message is too important to ignore for a while? The answer may have to with their psychological ability, or inability, to wait for rewards, according to a new study at the National Institute for Occupational Safety and Health (NIOSH).

Traffic-related fatalities are the leading type of job-related deaths. Knowing what motivates texting while driving is a basic prerequisite for designing and evaluating effective countermeasures in workplace safety programs.

In this preliminary study, researchers found that voluntary participants who reported texting while driving were more vulnerable than their non-texting peers were to impulsive decision-making. Participants who reported texting while driving on a study questionnaire were more likely than non-texting drivers to show a preference for immediate, smaller amounts of hypothetical money over delayed, larger amounts that they would receive after waiting weeks to months. In other words, the texting drivers were too impulsive to wait.

Participants included 147 undergraduate students who attended the same northeastern state university, where they were taking introductory psychology courses. For participating in the study, the students received course credit.

The study confirms previous research showing that texting drivers are more impulsive than non-texting drivers are. But a unique finding in this study is how well the preferences for immediate versus delayed rewards predicted texting behavior. According to the researchers, measures of reward preferences may be useful for identifying drivers who are at increased risk of texting while driving. Future research in this area should study decision making under realistic texting scenarios using typical interpersonal and social rewards that result from texting. The goal is to design better interventions or technologies that alter a driver’s decision to text while driving or while engaged in other risky behaviors.

To read the full article, go to the journal Accident Analysis and Preventionexternal icon. 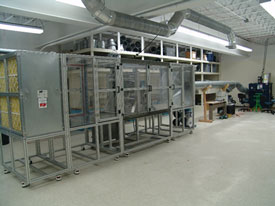 Researchers at the National Institute for Occupational Safety and Health (NIOSH) confirmed that a test method they designed accurately measures silica dust released when construction workers cut fiber-cement siding. In lab and field studies, they also found that attaching a regular shop vacuum to a dust-collecting circular saw is a simple, low-cost way to reduce exposure to silica dust released when cutting the siding. In addition to affirming the accuracy and reliability of the measurement method itself, the studies also led NIOSH to further examine, validate, and recommend use of shop vacuums attached to power saws as a simple, effective exposure control measure. NIOSH presented its findings and recommendations in a recent guidance document called Workplace Solutions: Reducing Hazardous Dust Exposure when Cutting Fiber-Cement Sidingpdf icon.

Fiber-cement siding comprises a plant-based material called cellulose fiber, silica sand, cement, and water. Although this kind of siding is a popular construction material used in place of wood or vinyl, silica dust can be released into the air when cut with power saws. Respirable silica dust poses a significant health hazard to construction workers. As NIOSH recommends, employers can mitigate the risk by using proper control measures to meet exposure limits, but to do so, they need to know how much respirable silica dust is released in cutting. With the dust released from fiber-cement composite, this means being able to distinguish the silica content in the overall dust and the sizes of the dust particles. Particle size is one of the factors that determine the likelihood that silica dust will be inhaled into the lungs and so is a factor in guiding exposure control strategies.

In This Issue
NIOSH Research Rounds is Brought to You By:
In the laboratory study, researchers designed a dust-testing system and found that it accurately measured, in repeated analyses, the amount and size of silica dust released when cutting four commercially available brands of fiber cement siding. The lab findings enabled further experiments and field studies evaluating the effectiveness of a shop vacuum attached to a dust-collecting circular saw as an exposure control measure.

The researchers said that future studies could enable them to modify their dust-testing system for use on other types of equipment and materials that generate silica dust, potentially leading to additional ways to protect workers from dust-related health hazards.

To read the full article, with details about the study protocol, test equipment, and results, go to The Annals of Occupational Hygieneexternal icon.

Although Dallas and Houston, Texas, require convenience stores to take a range of precautions to prevent robbery, 598 randomly sampled stores in the two cities didn’t always follow all the requirements, a National Institute for Occupational Safety and Health (NIOSH) study found. And the two precautions least likely to be taken by storeowners were those costing little time or money: posting signs with messages to deter would-be robbers—such as No Loitering and Security Camera in Use—and keeping an unobstructed view between the cash register area and windows and doors.

Owners may have instituted those precautions less often because they thought that it was more important to comply with other requirements, such as installing drop safes, alarm systems, and security cameras, the researchers theorized. Also, with limited window space, owners may have put a higher premium on advertisements than on warning signs.

Robbery-related homicides and assaults are the leading cause of work-related deaths in U.S. retail businesses, and most occur at gas stations and food and beverage stores. Knowing more about compliance with laws to deter robbery helps researchers evaluate their effectiveness and determine what other elements may need to be examined.

The NIOSH researchers found that full compliance was low in both cities but at least was consistently higher in Dallas than in Houston for many of the requirements and higher at chain stores than at single owner-operator stores.

From the findings, it appears that city-initiated enforcement measures could improve overall compliance, especially for single owner-operator stores, the researchers said. Only 3% of all stores in the study reported receiving a citation from the city for not complying with the regulations. It is likely most helpful to engage influential people and organizations, such as insurance companies and chambers of commerce, to work with managers of single owner-operator stores to understand the importance of full compliance. These stores do not typically have formal business networks, as chain stores do, to communicate important safety messages and policies.

Working with partners, NIOSH next will compare the crime rate before and after the convenience stores adopted the regulations. This will allow NIOSH to determine if the regulations are effective in curbing robbery.

Vehicle safety technology that uses real-time alerts and coaching can help reduce unsafe driving practices among drivers who work for truck and other fleet companies, according to results of research by the National Institute for Occupational Safety and Health (NIOSH). Fleet operators are increasingly adopting in-vehicle monitoring systems (IVMS) as part of their motor vehicle safety programs. IVMS applications often combine real-time alerts in a vehicle and coaching by supervisors to help employees improve their driving performance. To address the lack of strong scientific evidence for the effectiveness of IVMS in the workplace, NIOSH researchers have conducted a multi-year field study.

The IVMS technology used in this study was based on accelerometers that detect maneuvers such as hard braking, acceleration, cornering, or swerving, supplemented by forward- and driver-facing cameras mounted in the vehicle. When the IVMS detected one of these harsh vehicle maneuvers during the study, the system was set to automatically capture 30 seconds of video and audio data (15 seconds before and 15 seconds after the triggering event).

NIOSH studied information from over 400,000 video events from two truck fleets equipped with IVMS—one a local trucking fleet, the other an oil and gas services fleet. Researchers evaluated two types of feedback given to the driver: instant feedback from lights on the dashboard that flashed to denote harsh vehicle maneuvers, and one-on-one coaching between supervisor and driver. The coaching consisted of viewing the recorded video events involving the driver and discussing company policy and safe driving practices.

A research study involving a sample of 98 hospitals in six states found inconsistencies in some practices for using respirators to safeguard healthcare workers when in close contact with patients who may have seasonal flu or other infectious respiratory diseases. The findings from the study, which was supported by the National Institute for Occupational Safety and Health (NIOSH) and included two NIOSH co-authors, were published in a peer-reviewed journal.

The sampled hospitals followed most respiratory protection program requirements, including providing healthcare workers with medical evaluations, respirator fit testing, and training prior to their use of a respirator. However, the study also found that healthcare workers did not consistently check respirator seals and hospitals did not conduct follow-up training on how to properly put on and take off a respirator. The study was conducted between January 2011 and June 2012 in sampled hospitals in California, Illinois, Michigan, Minnesota, New York, and North Carolina. Because this was an exploratory study, the findings can’t be generalized beyond the six hospitals involved, but the results do suggest questions for further analysis and issues for attention, the research article said.

To read the full article, go to American Journal of Infection Controlexternal icon.

To learn more about using respirators to protect against the flu at work, visit Seasonal Influenza in the Workplace.