If you have ever used a power tool, you may have experienced a tingling sensation in your hands or fingers. If you’re just using the tool for occasional projects around the house, the tingling normally goes away. However, for workers who use power tools as part of the job, regularly and for longer periods, tingling can become more persistent as a symptom of a condition called hand-arm vibration syndrome. It can signal the onset of more severe symptoms of damage to nerves and blood vessels in the hands and arms. Those more advanced symptoms can include severe skin discoloration, numbness, and a weakened grip.

Preventing hand-arm vibration syndrome by reducing exposure to vibration is key. In many workplaces, a prevalent preventive method is the use of vibration-reducing gloves, which are intended to absorb vibration from power tools. 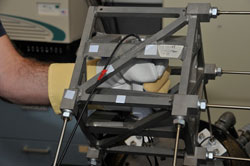 NIOSH researchers are examining that question with extensive reviews of the published scientific literature and with laboratory studies focused on better understanding the complex array of factors that may lead from exposure to effect.

In an article published recently in a peer-reviewed journal, the researchers examined glove performance in reducing the transmission of vibrations from the tool to the palm of the hand. The study incorporated three critical factors: the type of tool used, the range of vibration emitted by the tool, and the directions from which the vibration came. To ensure a representative sample, they tested three styles each of the four different types of commercially available gloves. The researchers tested the gloves on special, high-tech equipment developed in NIOSH’s Vibration Lab in Morgantown, WV. The equipment included 3-D testing systems that simulate the wide range of vibration frequencies along the axis of the tool handle, along the user’s forearm, and perpendicular to those two directions. To examine the glove effectiveness, the researchers evaluated vibrations measured on jackhammers, drills, grinders, riveters, and many other power tools.

They found that, when used at the medium-to-high frequencies of tools such as grinders and saws, the gloves reduced anywhere from 5 to 20 percent of the vibrations to the palm. With low-frequency tools, however, such as pavement tampers and vibrating forks, some gloves slightly decreased, while others slightly increased the vibrations transmitted. 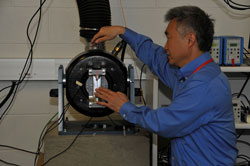 The NIOSH scientists are continuing with research to assess the performance of vibration-reducing gloves on vibration transmitted to the fingers. They eventually expect to incorporate findings from their studies and literature review into a NIOSH safety guide. In the meantime, the body of evidence suggests that employers and workers should be cautious in selecting and using vibration-reducing gloves. Consistent with long-standing NIOSH recommendations, the research suggests that reducing vibration at the source and limiting the time using power tools are the best ways to prevent vibration-related injuries. “Other means of vibration control, such as alternative production techniques, low-vibration machinery, routine preventive maintenance, and limiting the time spent using power tools, are far more likely to reduce vibrations and should be used,” said NIOSH project officer Ren G. Dong.

To read the most recent papers on this research, click the titles below:

It’s in the Genes – Looking for Biomarkers of Silicosis

This fall, NIOSH researchers with assistance from outside colleagues will begin a study to develop and validate specific biomarkers for risk of silicosis. The researchers hope the results will be a major step toward developing a simple blood test that would give early warning of effects of silica dust in the lungs at subtle genetic and cellular levels. With such a test, doctors and practitioners could better prevent the condition from progressing to later, debilitating, and potentially fatal stages of lung damage in a patient. Now, silicosis usually is diagnosed after damage has already occurred. Each year, millions of workers, primarily in construction, road building, and mining, are at risk of silicosis from exposure to silica dust. The disease is irreversible but preventable.

Also, the researchers expect the findings will provide scientists, for the first time, with genetic and cellular clues to determine the risk of silicosis. That aspect of the research reflects NIOSH’s leadership in advanced research in genetic mapping to better understand the interaction of occupational exposures with environmental exposures, life choices, and heredity. Understanding and addressing all of these factors are likely to suggest more effective steps to health than focusing on one alone.

Cleaning Products: How Much is Too Much?

In a study beginning this fall, NIOSH researchers, with outside investigators, will study the types of exposures and the levels at which cleaning products trigger asthma and other respiratory and irritant symptoms in hospital workers. Consistent with NIOSH’s commitment to improving the health and safety of healthcare workers, the researchers anticipate that their findings will provide valuable information about how to help prevent potentially debilitating job-related conditions.

Workplace-related asthma is preventable but common, especially in certain settings like healthcare that require many chemical products for cleaning and disinfecting. While previous research has shown that workers who regularly use cleaning products are at greater risk for asthma, the types of exposure and the levels that may increase risk are unclear.

To clarify these exposures, researchers will use innovative techniques to separate and measure the various chemicals contained in each cleaning and disinfecting product used by one hospital’s nursing and housekeeping departments. They then will examine the associations between the specific chemicals and respiratory symptoms in the 80 voluntary participants. At the beginning of the study, participants will complete health and occupational questionnaires and receive spirometry to measure lung function. They will also have blood samples tested for markers of inflammation, other cellular stress, and the genetic tendency to develop allergies. Tests will also measure heart rate variability and identify existing allergies. Later in the study, participants will take part in real-time monitoring for exposure to specific cleaning chemicals and real-time or serial assessment of respiratory health.

On average, today’s male truck driver is 26 pounds heavier and proportionately wider than his predecessor was three decades ago. This finding is from a 4-year NIOSH study published in April 2015, which originated from the need for up-to-date body measurements representative of today’s truckers. Truck manufacturers can now use the data from the study to fit the interior design of truck cabs more precisely to the sizes and shapes of today’s drivers.

Truck drivers last provided measurements in the United States in the late 1970s and early 1980s. These data are no longer useful in aiding the interior design of truck cabs because today’s truck driver workforce and truck drivers’ body sizes and shapes have changed over time.

As part of the study, NIOSH researchers took 32 body measurements—including hand length, ankle height, eye height while sitting, and everything in between—from 1,779 male and 171 female truck drivers in 15 states. Based on these data, researchers developed a set of 10 male and 10 female body models representative of the current truck driver population to support new truck cab design. An ergonomically designed cab based on up-to-date body size and shape information will provide a work environment better suited for its operator.

Would you like more information? A summary of the study results is available on the NIOSH website.

The first NIOSH smartphone app—the Ladder Safety app—is extending its reach to include stepladders, researchers said at last month’s National Occupational Injury Research Symposium. Since its release in 2013, the Ladder Safety app has helped thousands of users set up and use extension ladders more safely to prevent falls.

The new stepladder module will be available at the end of this year to help you use the most common four-legged portable ladders more safely. The new module will be based on the existing ladder safety standards and regulations and will provide easy-to-use, graphic-oriented safety tools, checklists, and guidelines.

With more than 40,000 downloads in the past 2 years, the NIOSH Ladder Safety app continues to help improve the safety of workers using extension ladders. In addition to its ladder-positioning tool for setting the ladder at the optimal angle, the app contains general ladder safety, inspection and selection guidelines, as well as accessory information. The Ladder Safety app is available free, in English or Spanish, for Apple and Android smartphones. Read more on the NIOSH webpage Fall Injuries Prevention in the Workplace.