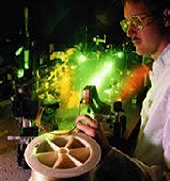 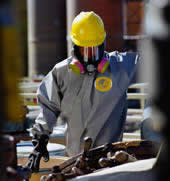 Several NIOSH successes highlighted on this page exemplify the types of activities the r2p initiative is designed to promote and enhance. These success stories show how NIOSH developed and transferred relevant knowledge, intervention and technology products. These stories also show how partners were integral to bringing NIOSH innovations into the workplace. NIOSH invites potential partners to learn more from these achievements and to work with us on existing and future partnering opportunities. Please contact the NIOSH Scientific Contact listed within the r2p in action story below for more information about their project.

Scientific Contact: William Murphy, (513-533-8125)
Through an active interagency agreement (IAG) between NIOSH and the United States Environmental Protection Agency (EPA) Office of Air and Radiation, the EPA Office of Policy Analysis and Review recently proposed a revised rule for labeling requirements of Hearing Protection Devices (HPDs). The original rule, 40 CFR 211 subpart B was promulgated in 1979. The proposed rule will require passive, active and impulsive noise reduction ratings for a new generation of HPDs designed to be used in a wide variety of noise environments such as rock bands, manufacturing operations, construction, aviation activities, and military operations. Over the history of this IAG, NIOSH was actively engaged in an initial public workshop held in 2003, the development of the hearing protector testing and rating standards ANSI S12.6-2008, ANSI S12.68-2007 and the most recent testing standard which is out for ballot, ANSI S12.42 -2009. For questions regarding NIOSH’s involvement in the IAG, contact William Murphy at 513-533-8125. For questions regarding the proposed rule, contact Ms. Catrice Jefferson or Mr. Ken Feith at EPA.

Scientific Contact: Steve Wurzelbacher, (513-841-4322)
Economics is the study of the production, distribution, and consumption of goods and services. Studying economics can provide guidance for the design of practical safety and health interventions and can illuminate the benefits and cost-effectiveness of such interventions. The application of economics in occupational safety and health provides a framework to identify economic inefficiencies associated with poor safety and health outcomes and points to the prevention opportunities with the greatest impact. To advance the safety and health of workers, NIOSH developed a MBA course titled, “Business Value of Safety and Health,” in collaboration with Xavier University’s Williams College of Business in Cincinnati, Ohio. This graduate course addresses how businesses can use occupational safety and health improvements and initiatives for long-term planning, operations management, and other decision-making processes. The course emphasizes real-world cases from industries that incorporated occupational safety and health strategies into their respective business models. More information about Developing a MBA Class on the Business Value of Safety and Health can be found at NIOSH and the Williams College of Business, Xavier University, Partner to Advance ‘Business Case’ for Job Safety, Health, or NIOSH Program Portfolio Economics page.

Scientific Contact: J. Shawn Peterson, (412-386-4995)
Noise-induced hearing loss (NIHL) is a common occupational illness in the United States with roughly 30 million workers exposed to excessive noise levels that could prove hazardous to their hearing. Studies indicate that 70%-90% of miners have NIHL great enough to be classified as a hearing disability. Research by Mine Safety and Health Administration (MSHA) indicate that roof bolting machine operators are among workers who are overexposed to noise. NIOSH further determined that the drill steel is the primary noise source for the operator. In collaboration with industry, labor, manufacturers, and governmental partners, NIOSH developed a collapsible drill steel enclosure (CDSE) to encapsulate the drill steel during operations and reduce the sound power emissions of roof bolting machines. Several mines have used the CDSE, and operators have provided testimonies that they observe a clear reduction in the noise level of the roof bolting machine. In addition, MSHA has publicly recognized the CDSE as a “promising” noise control technology.

Licensing Contact: Kathleen Goedel, (513-533-8686)
Through a simple color change, a NIOSH-developed hand wipe technology quickly and easily detects the presence of lead (Pb) contamination on skin and hard surfaces in industries where lead is produced or used to a limit of identification of 15 micrograms per sample. The method was designed following a NIOSH Health Hazard Evaluation in a Pb acid battery plant that revealed high concentrations of Pb on worker’s hands after washing and also on a variety of surfaces throughout the plant cafeteria. The Handwipe Disclosing Method for the Presence of Lead is patented (US Patent 6,248,593external icon

) and commercially available under the brand name Full Disclosure®. While the method provides instant field results, the samples can also be analyzed using numerous NIOSH laboratory analytical methods. Recognition of lead exposure risks is a critical first step in preventing workplace exposures as well as limiting take-home toxics that can result in ingesting of lead during eating, drinking, or smoking. Through this novel technology, lead exposure can be reduced for more than 10,000 workers and 900,000 children in the United States. Full Disclosure® was licensed in 2003 and is commercially available from SKC, Inc.external icon . Mention of a company name does not imply commercial endorsement by NIOSH.

Licensing Contact: Kathleen Goedel, (513-533-8686)
The Handwipe Method for Detecting Meth is an innovation that followed the NIOSH-invented Hand Wipe Method for Detecting Lead (see related r2p in action story on this page). NIOSH field investigations conducted with city law enforcement agencies and a global research center revealed the critical need for real-time meth surface detection methods. This method would enable first responders to accurately sample and determine meth concentrations so appropriate personal protective equipment (PPE) would be used in remediation of the crime or incident site. After development and testing of the method, SKC, Inc. approached NIOSH about the possibility of developing the technology and expressed interest in taking the idea to market. After working with SKC, Inc. on developing the Pb detection method under the brand name Full Disclosure ®, NIOSH trusted SKC’s intentions and believed the company was highly motivated to take the technology to market. SKC, Inc. enthusiastically pursued licensing the invention. In 2006, SKC released two products at the American Industrial Hygiene Conference and Exposition. The two NIOSH-invented technologies were commercialized and are now sold under the brand names MethAlertT (a colorimetric method) and MethChekT (immunochemical method). Mention of a company name does not imply commercial endorsement by NIOSH.

Workers on roadway construction sites face the risk of death or serious injury from passing motorists, construction vehicles and equipment. NIOSH sponsored a workshop with 60 key stakeholders from government agencies, labor unions, and private employers to discuss measures to reduce worker injuries from vehicles and equipment. As a result of this workshop, NIOSH then compiled research results and workshop participant input into a highway work safety zone guide. To date, over 21,000 copies have been distributed creating greater recognition that construction vehicles pose a substantial safety risk to employees in highway work zones. The guide has also been used in worker training programs and supplemental insurance carrier risk management plans. For more information on this r2p in action story and contact information, see NIOSH Protecting Workers in Construction documentpdf icon.

One-third of agricultural fatalities result from tractor overturns. In an effort to promote the use of Roll-over Protective Structures (ROPS), the Northeast Center for Agricultural and Occupational Health (NEC) studied risk perceptions, barriers, and motivating factors to tractor retrofitting among farmers in New York State. The results guided a social marketing campaign that was rigorously evaluated by implementing different levels of intervention efforts then comparing retrofit sales across different campaign regions. NEC’s campaign included a retrofitting/ROPS informational hotline for farmers as well as a 70% rebate on the cost of a rollbar, funded by the New York State Legislature. In the first year, more than 1000 farmers expressed interest and 259 completed the retrofit / rebate process. For more information on this r2p in action story and contact information, see NIOSH Protecting Workers in Agriculture documentpdf icon.