Occupational hearing loss, which is caused by exposures to hazardous noise (>85dBA) and ototoxic chemicals, is a serious concern for many workers. Approximately 22 million U.S. workers are exposed to hazardous workplace noise¹ and 9 million are exposed to ototoxic chemicals2. Occupational hearing loss is not confined to a single work sector: It occurs among any work sector where hazardous noise levels or ototoxic agents are present.  Some key statistics include: 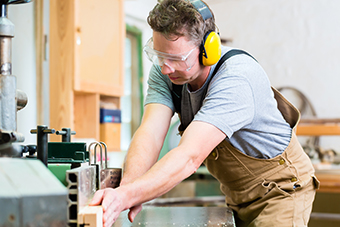 The high rates of hearing loss in the manufacturing and construction industries stem from working with loud equipment that could be made quieter through engineering controls. In addition, the Oil and Gas Extraction sector, as well as the Mining sector use equipment, which often requires close proximity of the operator to the noise source, or repetitive monitoring of equipment function, placing the workers within unsafe noise environments for some portion of their workday. The Mining, Construction and Manufacturing industries have consistently exhibited among the highest prevalence of hearing loss.1,2 The Services sector has also had high prevalence of hearing loss within certain sub-sectors, such as finance and insurance and educational services,3 although the underlying cause of hearing loss in these occupations requires further investigation.

The Hearing Loss Prevention Program works closely with hearing loss researchers in the Mining Program to develop and evaluate noise controls in their laboratories. Two of the only facilities in the country with the capability to conduct noise evaluations on large mining machines are located at Mining Program facilities. In addition, Mining Program researchers have developed relationships with the mining community that enhances their abilities to access mines to conduct field studies. This access to sites and mine workers enhances the relevance of the research by assuring that strategies, products, or concepts will be accepted by the end user, and can be effectively produced (if required) by a manufacturer. Areas of research need include impulsive noise generated by pneumatic tools and continued expansion of the ability to assess noise in manufacturing and construction settings.

Success has been realized on several past noise controls developed for the mining industry. The dual-sprocket conveyor chain for continuous mining machines is perhaps the largest success story. This noise control was developed through cooperation with JOY Global and hearing loss researchers in the Mining Program and currently is commercially available and has reached an approximate 30% market penetration. Other NIOSH researchers will continue to investigate noise controls for tools in the Construction, Manufacturing, Oil and Gas Extraction, and Services sectors.

Authoritative recommendations are needed to better integrate hearing protector fit testing into current hearing loss prevention programs. NIOSH developed the first mobile fit-testing solutions in 1976, and has been working on developing and enhancing systems ever since. Since 2010, NIOSH has worked with manufacturers and professional organizations to develop guidance and conduct training for integrating fit-test systems into the workplace. Because each hearing protector fit-test system is unique, a standardized method is needed to report personal attenuation ratings and allow them to be compared to the NRR. The American National Standards Institute (ANSI) recently published ANSI S12.71, Performance Criteria for Systems that Estimate the Attenuation of Passive Hearing Protectors for Individual Users.7 This standard describes how fit-testing systems can be tested and compared to the standard laboratory diffuse sound field real ear attenuation at threshold measurements.

Fit-test systems measure attenuation of hearing protection devices and provide the hearing conservation professional a teachable moment with the worker. NIOSH was an integral part of developing three acoustic standards for testing and rating hearing protection devices.8-10 These standards have been incorporated into the recent Department of Defense in their 2015 Noise Limit Design Criteria standard, MIL-STD 1474E, which will affect how hearing protectors are tested for millions of war fighters.11 In 2016, the Occupational Safety and Health Administration issued an advanced notice of proposed rule-making for integrating fit testing into mandated hearing conservation programs. NIOSH has a significant potential for impact in this area and will continue to prepare evidence based best practices for hearing protector fittesting. Now that ANSI standard for describing the personal attenuation rate is complete, we expect that the manufacturers of fit-testing systems will adopt the new method and will be able to relate the personal attenuation rating to the NRR.

Because hearing protection devices (HPDs) can be uncomfortable and reduce situation awareness, HPDs are frequently not worn in noisy environments. NIOSH has developed methods to assess comfort and is continuing to conduct research in this area. Through a year-long study of a new hearing protector, NIOSH found that only about 20 to 25% of workers accepted the new custom hearing protector in favor of the traditional formable and premolded earplugs.¹ Workers in dynamic, changing work sites, such as construction and mining, need to maintain situation awareness and therefore need protection that facilitates auditory localization and identification of workplace hazards.

New technologies may provide integration of developing technologies to promote better communication and prevent occupational hearing loss. Among these are devices with Bluetooth, active noise cancellation, and near field communication capabilities. NIOSH has the ability to provide assessment and promotion of new technologies that can affect the field of hearing conservation. Through partnerships with other commercial, university and government laboratories, NIOSH has developed acoustic standards for assessing unique hearing protection devices for attenuation, localization and speech intelligibility.

NIOSH has developed unique measurement equipment for assessing performance of HPDs. NIOSH can promote the adoption of new products and technologies. We have developed guidance documents and public outreach materials to improve selection and use of HPDs. For instance, NIOSH has promoted integrating fit testing with audiometric screening to facilitate worker training and education. NIOSH promotional efforts are favorably received because we are not promoting a product for commercial gain but rather are promoting best practices that will improve the health and safety of the workers.

Interventions to prevent hearing loss are sometimes ineffective due to improper and inconsistent use of hearing protection coupled with inadequate training.1

As a recognized authority, NIOSH’s occupational safety and health research can significantly influence education and best practices in the hearing loss prevention and the industrial hygiene communities. NIOSH provides authoritative recommendations and actively participates in the National Hearing Conservation Association, the Council for Accreditation in Occupational Hearing Conservation, the Acoustical Society of America, the American Academy of Audiology, and American Speech-Language Hearing Association to develop practical solutions for hearing loss prevention. We work closely with regulatory agencies to improve health and safety regulations (Occupational Safety and Health Administration, Mine Safety and Health Administration, Department of Defense, and Environmental Protection Agency). NIOSH is uniquely suited to educate all levels of industry because of their governmental, yet non-regulatory stance.

NIOSH is a highly recognized entity in hearing loss prevention. The continued impact of these activities is expected to be significant. NIOSH is well respected by professional organizations where partnerships exist and consistently delivers high quality products to the public. Outreach activities targeting workers and managers can lead to actions being taken, whether through implementation of noise controls, improved Hearing Conservation Programs, or application of other NIOSH developed best practices.

Surveillance is the ongoing systematic collection of health-related information for the purpose of prevention. Occupational hearing loss surveillance is necessary to estimate the incidence and prevalence of hearing loss as it relates to industry, occupation, and other risk factors; to identify high-risk groups; to develop evidence-based recommendations for prevention; and to monitor the progress of prevention efforts. Occupational hearing loss surveillance is therefore vital. Sources of surveillance data for occupational hearing loss include population surveys (e.g., National Health and Nutrition Examination Survey (NHANES), National Health Interview Survey), and incidence statistics from the Bureau of Labor Statistics. These sources have strengths but also limitations. In 2006, the National Academy of Sciences identified the lack of surveillance as a key shortcoming of the NIOSH Hearing Loss Prevention Project, so the NIOSH Occupational Hearing Loss Surveillance Project was initiated in 2009. Through this Project, NIOSH partners with audiometric services providers and others, including the United States Air Force, to collect audiometric data for noise-exposed workers in all industry sectors. NIOSH also examines data from other surveillance sources.

Continued and improved surveillance of occupational hearing loss is necessary for prevention. NIOSH supports this surveillance by participating in the development of new consensus standards to improve data collection methods, and introducing hearing-related and occupation-related questions in existing surveys. NIOSH also continues to collect audiometric data for noise-exposed workers from current partners and establishes partnerships with new ones. In addition, NIOSH often collects noise exposure information during health hazard evaluations in U.S. workplaces for analysis.

NIOSH has been actively involved in the development of new standards for occupational hearing loss. NIOSH used NHANES data to support the ISO 1999:2013 and ANSI S3.44-2015 standards for estimating occupational hearing loss, and is using NHANES data to revise the NIOSH Age Correction tables. These new tables will allow researchers to consider how to compensate for the relative risks of co-morbidity factors such as smoking, military exposure, diabetes, etc.

NIOSH has partnered with 23 audiometric service providers, hospitals, clinics and others, to collect over 15 million private sector worker audiograms for surveillance. These data have been used to establish hearing loss incidence and prevalence estimates and examine trends over time. NIOSH also partnered with the United States Air Force and collected 5.5 million military audiograms for surveillance and research.

Surveillance findings have been used to improve worker protections to prevent occupational hearing loss. For example, the National Institute of Standards and Technology (NIST) updated their hearing conservation program primarily based on a NIOSH surveillance publication1 that demonstrated a third of workers who need intervention to prevent additional hearing loss were being missed by hearing conservation programs when age correction was applied to hearing loss assessments. NIST no longer uses age correction when determining which workers need intervention. The Occupational Safety and Health Administration also scheduled a Request for Information preceding a rulemaking to update the Construction noise exposure regulation, motived by two papers, one of which was a NIOSH surveillance paper2 that highlighted the high prevalence and adjusted risk for hearing loss among noise-exposed workers in the Construction sector.

4Lawson SM, Masterson EA, Azman AS. [in press]. Prevalence of hearing loss among noise-exposed workers within the Mining, and Oil and Gas Extraction Sectors, 2006-2015. Am J Ind Med.