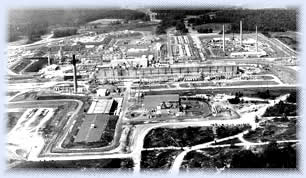 The Savannah River National Laboratory, also referred to as the Savannah River Site (SRS), is located near Aiken, South Carolina. In 1951, the laboratory was constructed and began operating to produce nuclear materials to support national defense efforts.
Today, the facility is called the Savannah River Technology Center. It is dedicated to research and development, environmental management and cleanup, and tritium processing.

Nuclear workers from the Savannah River National Laboratory have been included in many NIOSH studies. Below are fact sheets that summarize some of the study findings for workers.

Chronic lymphocytic leukaemia and radiation: findings among workers at five US nuclear facilities and a review of the recent literature (2007)

Bone marrow dose estimates from work-related medical x-ray examinations given between 1943 and 1966 for personnel from five U.S. nuclear facilities. (2006)

Assessment of plutonium exposures for an epidemiological study of US nuclear workers. (2005)

Bias and uncertainty of penetrating photon dose measured by film dosimeters in an epidemiologic study of US nuclear workers. (2005)

Leukemia mortality among workers at the Savannah River Site (2007)

Morality among workers at the Savannah River Site (2007)

The impact on relative risk estimates of inconsistencies between ICD-9 and ICD-10. (2006)

Use of multiple causes of death data in cancer mortality analyses. (2006)