You can also find the information on this page in the NIOSH Extramural Research and Training Program: Annual Report of Fiscal Year 2018.

The state surveillance program helps expand the ability of states to monitor work-related health and safety issues. The program supports the role of states to conduct in-depth surveillance and follow-up investigations and interventions. These local state-based skills and abilities help NIOSH meet the mandate to ensure a safe workplace. 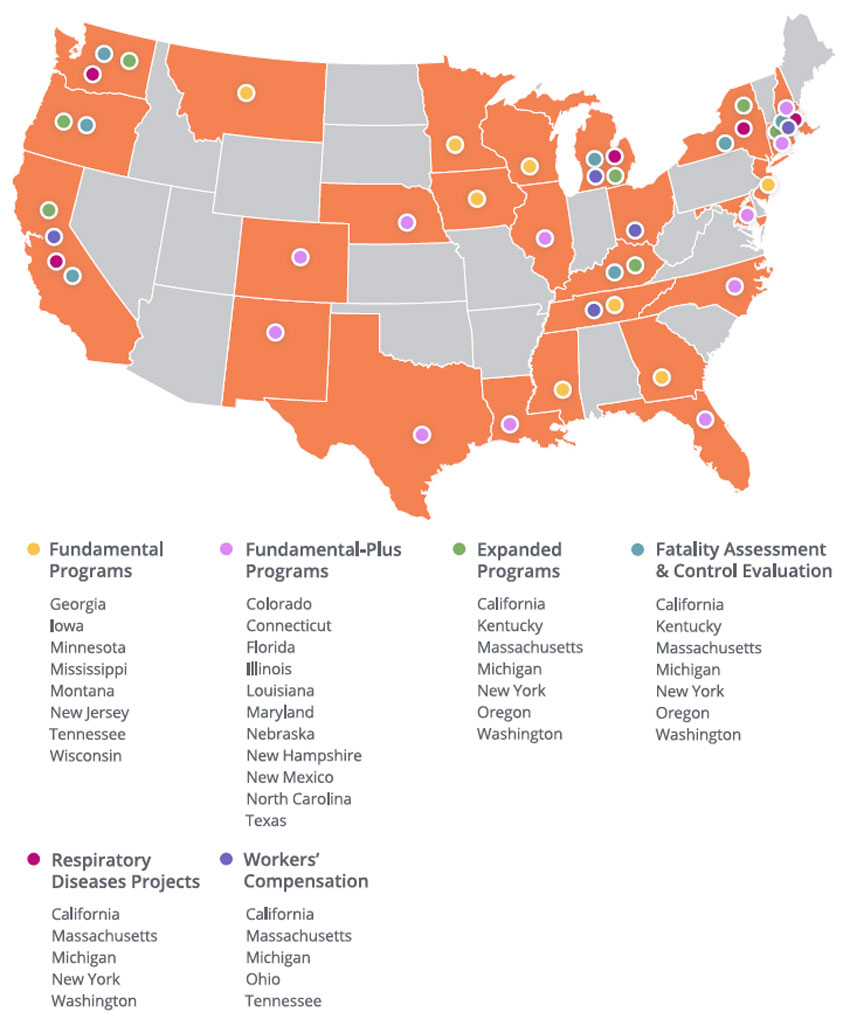 NIOSH values state programs and gives financial and technical support to state health and labor agencies to develop and expand their occupational health surveillance programs. The NIOSH extramural surveillance portfolio includes 26 state recipients composed of 49 projects focusing on work-related injuries and death, exposures and hazards, and worker populations of interest. These programs use and distribute surveillance data to find the incidences of job-related injuries, illnesses, and fatalities. They help to discover trends, research opportunities, emerging issues, and high-risk worker populations. The programs also create and send out targeted educational and prevention materials, adapting materials to best protect workers. They often engage in outreach and involve partners in public health and safety to advance “data into action.”

According to a study by the Massachusetts Department of Public Health (MDPH), Massachusetts workers died of opioid overdoses at vastly different rates depending upon their job. The highest rates were seen in construction and extraction, including quarrying, mining, and oil and gas removal, followed by agriculture, forestry, and fishing. To understand which industries and occupations have the highest rate of opioid-related deaths, researchers looked at 4,302 publicly available death certificates filed in Massachusetts from 2011 through 2015. They also used data from four national surveys to explore occupational factors that may contribute to differences in rates of opioid-related deaths in different occupations and industries.

Along with focusing on opioid-related deaths by occupations, the study also found differences by gender. Overall, most of the opioid-related deaths were among males, which is similar to findings for all opioid-related overdose deaths in Massachusetts. The rate of opioid-related overdose deaths was higher among workers employed in industries and occupations that have high rates of work-related injuries and illness based on data from the Bureau of Labor Statistic Survey of Occupational Injuries and Illnesses. The rate of fatal opioid overdose was also higher among workers employed in occupations with lower availability of paid sick leave (data from the Bureau of Labor Statistics Employee Benefits Survey) and high job insecurity, or the worry of becoming unemployed (data from the National Health Interview Survey).

Although more research is needed to understand how injury, job insecurity, paid sick leave, and other work factors may contribute to opioid overdose deaths, this study’s findings highlight the critical need for immediate interventions. Massachusetts Health & Human Services Secretary Marylou Sudders says the findings are important because they indicate occupations where interventions can prevent injuries. For example, educational programs and policies targeted toward occupations with a high rate of fatal opioid overdose should aim to decrease workplace hazards that could cause injury, resulting in opioid prescriptions. The MDPH is currently building on this initial work to conduct subsequent analyses using more years of death certificate data to analyze patterns by race and ethnicity, occupational subgroups within the construction sector, sub-state geography, and toxicology. The MDPH is also currently working to develop and implement an educational outreach strategy targeting high-risk worker groups.

In recent years, the Michigan Fatality Assessment and Control Evaluation (MIFACE) Program and the New York State (NYS) Department of Health aimed to increase awareness of health and safety risks related to methylene chloride in various products, including paint strippers. Workers, consumers, and others can be exposed to this liquid substance through inhalation or skin contact, and the exposure can cause heart, liver and nervous system problems, irritation of the skin and eyes, and cancer.

Based on information from MIFACE, the Environmental Protection Agency proceeded with a proposed rule to ban the manufacturing and sales of methylene chloride paint removers for consumers. The NYS Department of Health also kicked off a weeklong campaign to ban these paint removers in stores, sharing data on methylene chloride related fatalities with lawmakers, nongovernment workers, environmental health advocates, and Occupational Safety and Health (OSH) groups in New York and a dozen other states. Some New York legislators used this information to initiate and support a bill to ban the use of the chemical in the state. Additionally, because of the efforts in Michigan and New York, 13 major retailers, including Lowes, The Home Depot, Walmart, and Amazon, announced they would stop selling paint removal products containing methylene chloride, along with N-methylpyrrolidone (NMP) chemicals.

Legionnaires’ disease is a serious respiratory illness that often occurs in older adults and individuals with vulnerable immune systems. It has been associated with the use of hot tubs and air conditioners in large buildings. However, little information is available on the occupational settings linked to Legionnaires’ disease, along with common sources of it found in young and healthy workers.

The New York State (NYS) Department of Health launched an investigation into an incident where a healthy utility construction worker died from the illness. Prior to the fatality, investigators found the outdoor worker was exposed to standing water daily and eventually became sick with respiratory symptoms that initially medical providers did not properly diagnose and treat. It was later diagnosed as a severe case of Legionnaires’ disease and the worker subsequently succumbed to the disease.

The Washington State Safety and Health Assessment and Research for Prevention (SHARP) occupational safety and health surveillance program developed a new surveillance system that captures data on immediate work-related inpatient hospitalizations. The system links hospital discharge data with workers’ compensations claims to identify workers with hospital admissions within a day or less of being injured on the job. It provides descriptive information on high-risk injuries, allowing SHARP to evaluate the completeness of mandated employer reporting of these cases and informing its injury prevention efforts. A technical report was published in FY2018 based on the surveillance system data for 2015. This information focused on worker demographics, injury descriptions, industry and occupation, along with workers’ compensation claims. SHARP presented these results at the 2018 Council of State and Territorial Epidemiologists Conference in West Palm Beach, Florida, along with two agriculture safety and health forums in Washington State. Recently, the state legislature appointed funds for SHARP to expand the surveillance system, ensuring its sustainability.

Most of the emergency responders dispatched to a serious incident involving a toxic gas exposure did not use required respirators for breathing protection, according to a NIOSH-funded investigation from the Texas Department of State Health Services. The gas, phosphine, forms when pesticides containing aluminum phosphide mix with water. These pesticides are restricted to certified users because short-term exposure can cause respiratory and cardiovascular, or heart and blood vessel, complications, and can be fatal. Federal regulations require emergency crews on the scene with such hazardous substances wear personal protective equipment, including a respirator. Multiple studies, however, show this does not typically happen. Little information is currently available on how to increase emergency responders’ compliance.

The Texas Department of State Health Services reviewed this case of phosphine exposure among 51 hazardous materials emergency responders who evacuated and treated residents at an Amarillo, Texas, home after an outdoor pesticide application. The scientists reviewed call records from the Texas Poison Control Network related to the exposure and the results of a standardized health questionnaire completed by the emergency responders afterwards. More than 78% (40) of the emergency responders did not wear a respirator during the response. Of these, 15 received medical treatment and 7 reported new or worse phosphine exposure symptoms within a day after the incident. Their symptoms included eye pain, headaches, dizziness, abdominal cramps, and nausea.

The majority of the 51 emergency responders reported being trained in emergency response and understood standard operating procedures within their agency for handling incidents with hazardous substances. They gave several reasons for not wearing a respirator, including being unaware that it was necessary, focusing on rescuing people, and being unaware of the chemical’s presence.

These findings show that emergency responder trainings alone do not result in proper use of respirators during incidences with unknown hazardous substances. Few studies exist of behavioral interventions related to the use of respirators and other personal protective equipment among emergency responders. Methods for improving compliance with existing guidance and regulations are also not well understood. Scientists say more research is needed to evaluate effective interventions to ensure that emergency responders comply with current recommendations and regulations for personal protective equipment.