The state surveillance program helps expand the ability of states to monitor work-related health and safety issues. The program helps expand the role of states to conduct in-depth surveillance and follow-up investigations and inter­ventions. These local state-based skills and abilities help meet the NIOSH man­date to ensure a safe workplace. See the State Surveillance Program web page for more information on these state-based initiatives. 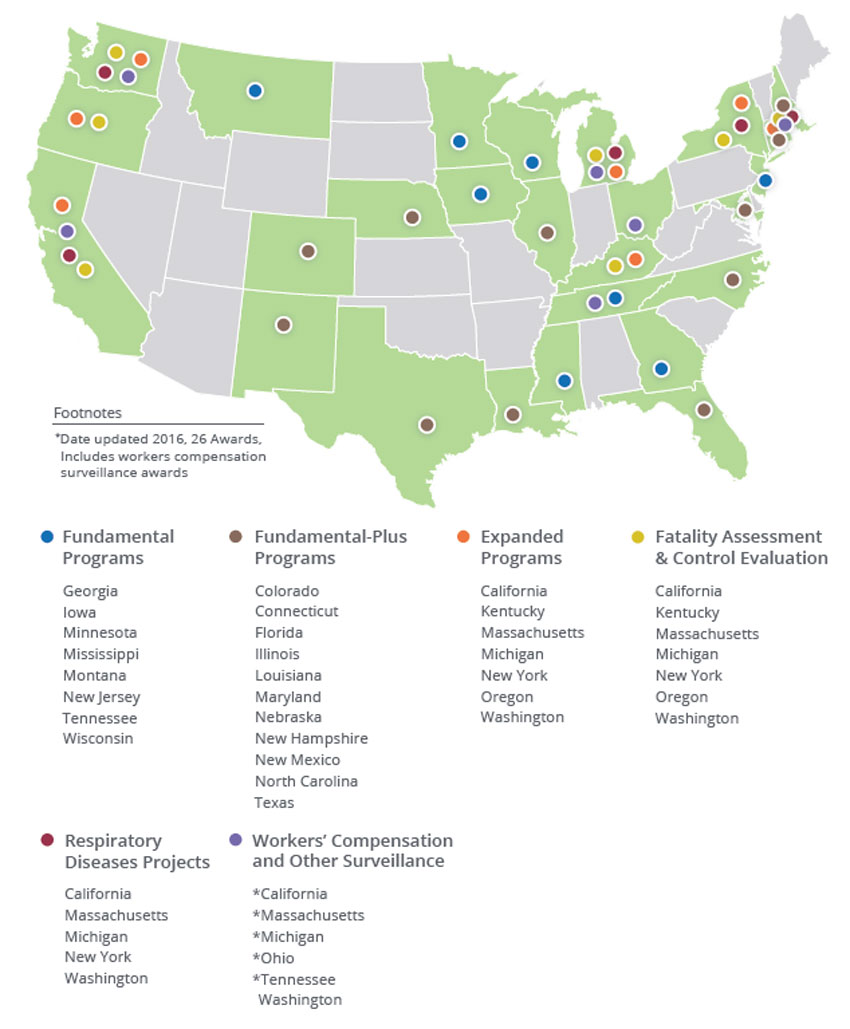 The NIOSH extramural surveillance portfolio includes 26 state recipients, composed of 49 projects focusing on work-related injuries and death, exposures and hazards, and worker populations of interest. These programs use and distribute surveillance data to find the incidences of job-related injuries, illnesses, and fatalities. They help to discover trends, research opportunities, emerging issues, and high-risk worker populations. The programs also create and send out targeted educational and prevention materials, adapting materials to best protect workers. They often engage in outreach and involve partners in public health and safety to advance “data into action.”

The rule amendment requires workplaces to report all cases of carbon monoxide poisoning to OEEB. The Carolinas Poison Center agreed to report case data each week to OEEB and OHSP. Before the rule amendment took effect in July 2017, about five incidents of carbon monoxide poisonings were reported over a period of six months, on average. Between July and October 2017, OEEB received 28 reported incidents of work-related carbon monoxide poisonings from the Carolinas Poison Center. This total included a low of one reported inci­dent and a high of seven reported incidents per week. The rule amendment allows OEEB to conduct follow-up investigations on poison­ing cases to get further information. It also allows OEEB to make at least two referrals to the North Carolina Occupational Safety and Health Administration for more employer site visits and investigations.

Over the past two years, the Louisiana Occupational Health and Injury Surveil­lance Program received information on 34 cases of elevated blood lead levels (BLLs) from shooting range workers. These cases involved BLLs equal to or more than 10 μg/dL. Healthy People 2020 aims to lower BLLs to below 10 μg/dL. In response, the program emailed about 800 firearm instructors with general information about lead exposure, including health effects and protection from exposure. They also presented information about elevated BLLs cases at a workplace safety conference sponsored by the OSHA, recommending that OSHA increase enforcement at indoor firing ranges.

In recent years, the New York Fatality Assess­ment and Control Evaluation (NY FACE) Program presented occupational fatality data at Workers’ Memorial Day events across the state. This data show that Hispanic sanitation workers face a high risk for severe injuries, especially while working on the road. These presentations led a state lawmaker and a group of advocates for Hispanic workers to collaborate with NY FACE in 2017 to help pre­vent these deaths.

With NY FACE providing the data on sanitation worker fatalities across the state, the New York State Legislature voted to expand the Ambrose-Searles Move Over Act. The original Act requires drivers to use due care to avoid hitting emergency vehicles parked on the side of the road or highway. The expanded law now includes tow trucks, construction and highway maintenance vehicles, and sanitation and recycling trucks.

Colorado’s Occupational Health and Safety Surveillance Program published the Guide for Worker Safety and Health in Marijuana Industry; the first guide of its kind for worker safety in the marijuana industry. The publica­tion gives employers an overview of current federal, state, and local regulations to use in developing workplace safety programs. The guide generated a lot of attention in both the cannabis industry and occupational safety and health.

Throughout FY2017, various groups shared information about the guide through webi­nars, trainings, and conferences—events sponsored by academic institutions and industrial hygiene, safety-related, and health organizations. For example, the Colorado program presented to the 2017 Canadian Agricultural Safety Association. The program also partnered with two NIOSH-funded multidisciplinary centers—the Mountain and Plains Education Research Center and the Center for Work, Health, & Environment—to host the first safety and health training for the marijuana industry. More than 200 workers in the industry attended the trainings in 2017. Also, occupational health and safety profes­sionals in areas like Oregon, California, and the Canadian Provence of Alberta contacted the Colorado program for workplace safety guidance in the marijuana industry.

For the Iowa Occupational Health & Safety Surveillance Program (OHSSP), working with other state agencies improved transportation safety and reduced job-related motor vehicle injuries and fatalities. OHSSP partnered with the state Governor’s Traffic Safety Bureau (GTSB) and the Iowa Department of Trans­portation (IDOT) to develop three influential documents in FY2017: the Highway Safety Plan–FFY 2017, the Iowa Fatality Reduction Strategies Report, and the Iowa 2016 Impaired Driving Coalition Final Plan. The Iowa Leg­islature signed two bills into law based on information from these reports and focused on reducing traffic fatalities due to distracted and drunk drivers.

One law (Senate File 234), which went into effect July 1, 2017, improved Iowa’s ban on using hand-held electronic devices while driv­ing—including texting. The new bill changes this action from a secondary to a primary offense. This law allows police to pull drivers over for using a hand-held electronic device and issue a $30 dollar fine. In the past, police could only stop and ticket drivers if they com­mitted a primary offense like speeding.

According to the Iowa Safety Patrol, the new law helped reduce traffic-related fatalities from 398 in 2016 to 329 in 2017. Under a second new law (Senate 444), a driver using a hand-held electronic device who is involved in a traffic-related death will face a charge of homicide by vehicle. The legislation also established a statewide sobriety and drug monitoring program. OHSSP’s partnership with GTSB and IDOT also led to a public ser­vice announcement on drowsy driving, “Don’t Wake Up to a Nightmare.” The video received a 2017 Telly Award, which recognizes outstanding video content.