Nailing Down the Need for Nail Gun Safety 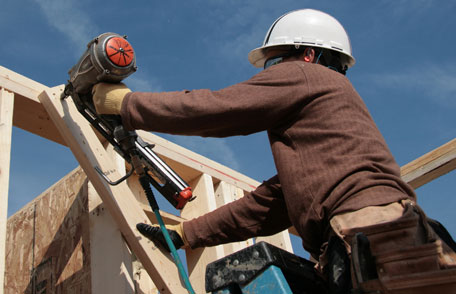 Nail guns are are a tool used by both construction workers and in homes that make building go faster, this increased productivity introduced new injury risks (or risk factors). Knowing the hazards of nail guns and how to use them more safely can prevent injury at your job site or during your next building project.

Nail guns are powerful, easy to operate, and boost productivity for nailing tasks. They are also responsible for an estimated 37,000 emergency room visits each year – 68% of these involve workers and 32% involve consumers. Severe nail gun injuries have led to construction worker deaths. Fortunately, these injuries can be prevented, and more and more contractors are making changes to improve nail gun safety. Research shows that risk of injury is twice as high using “contact” trigger nail guns compared to “sequential” trigger nail guns. 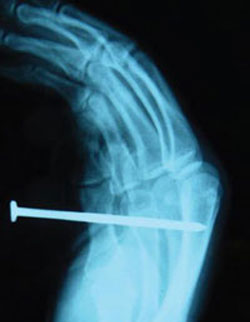 Nail gun injuries are responsible for an estimated 37,000 emergency room visits each year.

How do Nail Gun Injuries Happen?

There are seven major risk factors that can lead to nail gun injury. Understanding them will help you to prevent injuries on your job sites.

It Can Happen to You

From a construction worker’s standpoint:

Two framers were working together to lay down and nail a subfloor. One framer was waiting and holding the nail gun with his finger on the contact trigger. The other framer was walking backwards toward him and dragging a sheet of plywood. The framer handling the plywood backed into the tip of the nail gun and was shot in the back. The nail nicked his kidney, but fortunately he recovered. As a result of this incident, the contractor switched to using only sequential triggers on framing nail guns. Co-workers can get injured if they bump into your contact trigger nail gun. You can prevent this by using a full sequential trigger.

From a contractor’s standpoint:

After his crews experienced many double fires and a related serious nail gun injury, a New Jersey contractor switched to using only sequential triggers. He believes he has eliminated the risk of double fire injuries and he estimates that the change has had only a slight impact on productivity—a few extra hours per house.

A comic book based on NIOSH supported research, Nail Gun Safety: A Guide for Construction Contractors

6 Practical Steps You Can Take

By taking these steps, employers can prevent nail gun injuries from occurring:

To learn more, watch our video below “Know Your Nailer: Nail Gun Safety.”