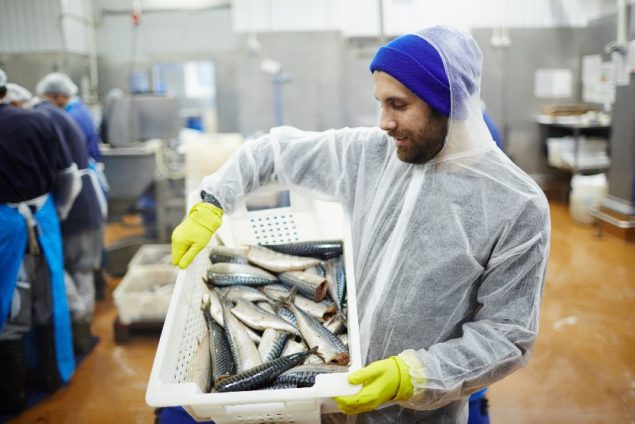 Seafood processing involves preparing seafood for delivery to the consumer after it is harvested, including tasks such as eviscerating, freezing, canning, and packaging the product. Seafood processing brings the natural resource to market and adds value to the product. In 2017, the estimated value of seafood processed in the U.S. was $11.9 billion, with edible products valued at $11 billion and industrial products at $903.1 million. 1 In the U.S. during 2017, there was an annual average of 816 establishments and 35,579 workers in the seafood processing industry, with the Pacific region employing the most workers. 2 In many establishments, the number of workers fluctuates seasonally, with higher employment during peak seafood harvesting seasons. During peak seasons, workers spend 12-16 hour days on the processing line. Entry-level positions have few requirements for education or experience and pay low hourly wages. 3-7

During 2011-2017, seafood processing workers had the highest injury/illness rate of any U.S. maritime workers at 6,670 injuries/illnesses per 100,000 workers.8 Occupational hazards in this industry include exposures to biological aerosols containing allergens, microorganisms, and toxins; bacteria and parasites; excessive noise levels; low temperatures; poor workplace organization; poor ergonomics; and contact with machinery and equipment.9-19