On June 26, 1998, a 34-year-old male tree feller (the victim) died of injuries sustained when he was struck in the head by a boulder which had rolled down from the hillside above. The victim was felling trees on terrain with a 70% slope. A bulldozer had constructed a skid road approximately 75 feet above the victim four to six hours earlier. There were no operations in process above the victim during the incident. Just prior to the incident, the victim had felled two trees and was in the process of limbing them. Two fellow workers who witnessed the incident reported that they spotted a large boulder three to four feet in diameter rolling down from an unknown origin. The workers yelled a warning to the victim but he was unable to hear them due to his running chainsaw and the hearing protection he was using. The boulder was airborne when it struck the victim in the head. The victim experienced a severe injury to the back of the head in spite of the hardhat he was wearing. One of the workers ran to the operation’s landing site and notified the owner who then called the local EMS. A coworker administered first aid and CPR for approximately 30 minutes until exhausted, at which time the EMS arrived and pronounced the victim dead. The EMS transported the victim to a local hospital. The coroner estimated the time from injury to death to be minutes.

The WV FACE Investigator concluded that, to reduce the likelihood of similar occurrences, employers should:

On June 26, 1998, a 34-year-old male tree feller (the victim) was killed after being struck in the head by a boulder which had rolled down the hillside. On August 4, 1998, the West Virginia FACE Investigator was notified of the death by the West Virginia Department of Health and Human Resources via a death certificate. On October 1, 1998, the WV FACE Investigator conducted an on-site investigation. The investigator reviewed the incident with the West Virginia Division of Forestry representative who then accompanied the investigator to the site. The logging company’s designated representative was interviewed. The incident site and the fatal energy source (boulder) were examined and photographed. Other informational sources and contacts included: death certificate, medical examiner’s report, newspaper articles, OSHA, West Virginia Division of Forestry, National Weather Service and responding EMS.

The employer in this incident was a commercial logging company that had been in business for one year and employed twenty employees. The owner and five employees were present the day of the incident. The land was industry-owned. The unmarked, forty acre timber stand was being selectively logged for saw timber prior to being strip mined. The tract was steeply sloped and therefore required deep cuts into the banks in order to construct the necessary roads. To construct the roads, large sections of stratified rock formations were disturbed.

The owner held Certified Logger status in West Virginia. [Note: The Logging Sediment Control Act of West Virginia (1992) requires that each timbering operation in West Virginia be supervised by a certified logger. To become a certified logger, an individual is required to successfully complete training and pass a test for best management practices (a soil erosion prevention plan) and chain saw safety and possess a current first aid card.1]

The victim’s job at the time of the incident was cutting trees. He had been a logger for five years. The victim had been cutting for the employer for a total of six months when the incident occurred.

On June 26, 1998, the company was selectively harvesting the tract and had begun work at approximately 7:00 a.m. It was reported by the National Climatic Data Center within the area to be the hottest day of the month (90° F), dry with 0.00 precipitation, and an average wind speed of 4.5 mph. It had not rained for three days prior to the incident. The owner and five employees were working the day of the incident. At approximately 8:00 a.m. on the day of the incident, a bulldozer constructed a skid road approximately 75 feet above the incident site. At the time of skid road construction, the victim and fellow workers were working elsewhere. Later that day the victim began felling trees below the previously constructed skid road. The incident site was a steep hillside with a measured slope of 70%. There were many dislodged boulders and rocks at the edge of the skid road (see Figure 1). The hillside above the victim also had many randomly distributed rocks and boulders (see Figures 2 & 3). There were no operations in progress above the victim at the time of the incident. Just prior to the incident, the victim had felled two trees in a downhill direction. He was then asked by fellow workers for help in freeing a jammed chainsaw. He offered to help free the chainsaw after he limbed the trees he had cut. At approximately 2:20 p.m., two fellow workers spotted a large round boulder three to four feet in diameter rolling down from a location above the victim. Ground vibration created by the felling and limbing operation may have caused the boulder to dislodge. The workers yelled a warning to the victim but he was unable to hear them due to the noise from his chainsaw and because he was wearing hearing protection. The victim was facing down slope which was indicative of the location of the head injury. Co-workers reported that the boulder was airborne when it struck the victim’s head (see Figure 4). The boulder came to rest approximately fifty feet below the victim on another logging road (see Figure 5 & 6). The victim experienced a severe injury to the back of the head. He was wearing a hardhat. One of the workers ran to the operation’s landing site and notified the owner, who at 2:25 p.m., then called the local EMS. The victim’s co-worker administered first aid and CPR for approximately 30 minutes until the EMS arrived, assessed the victim, and pronounced him dead. The EMS transported the victim to a local hospital. The coroner estimated the time from injury to death to be minutes.

The medical examiner’s report listed the immediate cause of death as head injury.

Recommendation #1: Employers should ensure that tree cutters properly evaluate the area around timber to be felled so that potential hazards can be identified and avoided.

Discussion: In this incident, the victim was felling trees on a steeply-sloped hillside where boulders and rocks had been disturbed by the construction of a skid road. These loose boulders and rocks were located above the victim’s work area. Recently disturbed boulders and rocks positioned on steep-sloped hillsides are often inherently unstable. OSHA Regulation 29 CFR 1910.266(h)(2)(ii) requires that before a tree is felled, conditions such as, but not limited to, snow, ice accumulation, the wind, the lean of the tree, dead limbs, and the location of other trees, shall be evaluated by the feller and precautions taken so a hazard is not created for an employee.2 Evaluation of the area above the feller, prior to felling operations, may have revealed the presence of recently dislodged boulders and their resting positions, thereby giving the victim the opportunity to inform management or secure and/or eliminate the identified hazard.

Recommendation #2: Employers should ensure that dozer operators perform a post-operation visual inspection of sloped areas adjacent to newly-constructed roads, especially future work areas located downhill of the disturbed areas, for the purpose of identifying and abating newly-created hazards such as unstable boulders and rocks.

Discussion: In this incident, the tract was steeply sloped (70%) and therefore required deep cuts into the banks in order to construct the necessary roads. The deeper the cuts, the greater the spoil piles and associated boulders/rocks. Four to six hours prior to the incident, a bulldozer had constructed a skid road approximately 75 feet above the incident site. At the time of skid road construction, the fellers were cutting elsewhere. Post road construction site evaluation of conditions should have been performed. CFR 1910.266 d(6)(i) requires that employees shall be spaced and the duties of each employee shall be organized so the actions of one employee will not create a hazard for any other employee.2 Having performed a post-operation visual inspection may have revealed the presence of dislodged boulders and their resting positions. Once identified, these newly created hazards could have been abated prior to exposure.

Recommendation #3: Employers should develop, implement, and enforce a written safety program which includes, but is not limited to, task specific safety procedures and worker training in hazard identification, avoidance, and control.

Discussion: The evaluation of tasks to be performed at the work site form the basis for the development, implementation, and enforcement of a safety program as well as task-specific safety procedures. The key elements of the program should include the communication of task- specific safe work practices and, at a minimum, training in hazard identification and the avoidance and abatement of these hazards. In this incident, the victim was fatally injured when he approached an unsafe situation (a steeply-sloped hillside where there were many boulders and rocks on the slope above). Training in the hazards associated with the work environment and task-specific safety procedures via a comprehensive safety program may have given the victim the knowledge necessary to recognize and avoid a hazardous situation. CFR 1910.266 (i)(3)(iii) requires that workers be trained in the recognition of safety and health hazards that are associated with their assigned job tasks, including the use of measures and work practices to prevent or control these hazards.2

Discussion: Conducting regular safety inspections of all logging operations by a company-appointed competent person, who has the ability to identify hazards and the authority to take prompt corrective action, will help ensure that established company safety procedures are being followed. In addition, scheduled and unscheduled inspections clearly demonstrate to the employees that the employer is committed to the safety program and to the prevention of occupational injury. Frequent inspections increase the likelihood the hazards will be recognized. Then, prompt corrective action can be taken. 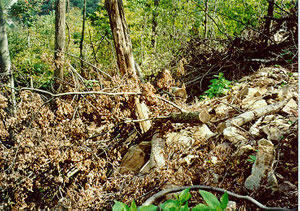 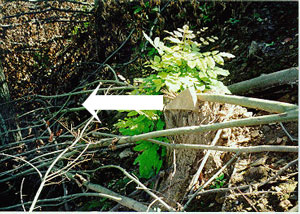 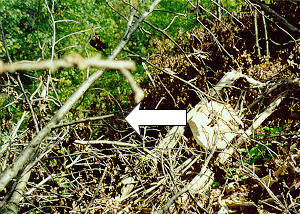 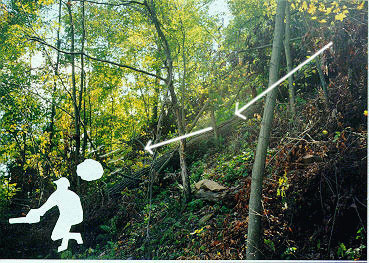 Figure 4. Slope and approximate position of victim when hit with boulder. 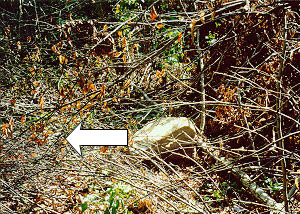 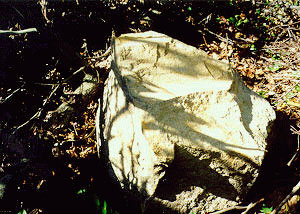 The WVU Center for Rural Emergency Medicine, through a contract with the West Virginia Department of Health and Human Resources, conducts investigations on the causes of work- elated fatalities within the state. The goal of this program is to prevent future fatal work-place injuries. West Virginia FACE intends to achieve this goal by identifying and studying the risk factors that contribute to work-place fatalities, by recommending intervention strategies, and by disseminating prevention information to employers, employees, trade associations, unions, equipment manufacturers, students, teachers, and others with an interest in work-place safety.