Laborer Dies From Fall Through Skylight While Shoveling Snow on Roof

A 43-year-old male laborer (the victim) at a coatings manufacturing company died after falling through a skylight to a concrete floor 14 feet below. The victim and a co-worker had volunteered to clear snow from the roof of the company building late on a January afternoon, after their regular work day was finished. A flat roof over the first story portion of the company was covered with drifted snow, which varied in depth from several inches to over 3 feet in places. The victim was using large steps to walk through the snow to the south side of the roof, where the snow was deepest. It completely covered the tops of skylights in this area. He apparently failed to see the unguarded, three-foot square skylight and stepped onto it while walking. The plastic bubble of the skylight broke, and the victim fell to the concrete floor. His co-worker had been walking toward the north side of the roof, and turned to look when he heard a noise from the victim’s direction. Seeing the broken skylight, the co-worker yelled for help. Workers on the main floor were already assisting the victim, where he had fallen, and called emergency services. EMS responders were on the scene within minutes, and a physician pronounced the victim dead at the scene. To prevent future fatalities of this type, the FACE investigator recommends employers should:

On January 5, 1999, a 43-year-old black male laborer died after falling 14 feet through a skylight opening. The Wisconsin FACE field investigator learned of the incident from a newspaper article on January 6, 1999. On March 24, 1999, the field investigator conducted a phone interview with the employer. The investigator viewed the site from the street on a later date, and obtained the death certificate and the medical examiner and sheriff’s reports.

The employer was a plastic coatings manufacturer that had been in business about forty years. There have been no fatalities at the company prior to this incident. The victim had worked for the company for about eighteen years. His work duties usually involved mixing paint used in the plastics manufacturing process. He was characterized as a worker who frequently volunteered to help the company on overtime assignments and with chores that were outside of his regular duties. Workers received on-the-job training for their assigned jobs. Safety information was included with job training, and during company training sessions for updates on workplace requirements. Written safety plans were in place for routine job activities, but not for the activity of clearing snow from a roof.

The incident occurred at a plastic coating manufacturing factory. The facility had a two-story portion where the manufacturing processes occurred, and an attached one-story warehouse area. Two doors on the second story provided access to the flat roof of the first story. The employer had designated the doors as emergency exits for an event requiring evacuation of the manufacturing area. Employees often used the flat rooftop for breaks, using the emergency doors for access. The victim had used the rooftop for his breaks, but it is unknown if he had ever cleared snow from the roof before the day of the incident.

On the day of the incident, the victim worked his regular shift starting at 6:30 AM, with a lunch break. Near the end of the shift, his supervisor asked for help in clearing snow and ice from the front of the emergency exit doors. The victim volunteered to help, so at about 4:15 PM, the supervisor and the victim went to the roof. There was daylight at this time. The supervisor began walking toward the north end of the roof to use a snowblower, and the victim headed toward the south end. Footprints in the snow indicate the victim was taking long strides, and after walking approximately 100 feet he stepped onto a skylight that was buried in the snow. The light plastic covering of the skylight gave way, and he plunged through the 3-foot square roof opening to the concrete floor of the warehouse below. His supervisor turned to look in the direction of the victim when he heard a noise. Seeing the broken skylight, he yelled for help. Workers on the main floor were already assisting the victim, where he had fallen, and called emergency services. EMS responders were on the scene within minutes, and a physician pronounced the victim dead at the scene.

The medical examiner’s report listed the cause of death as craniocerebral, neck and chest injuries due to a fall from height.

Discussion: According to 29 CFR 1910.23 (a)(4) “Every skylight floor opening and hole shall be guarded by a standard skylight screen or a fixed standard railing on all exposed sides.” Additional requirements are specific about the design and capacity of the guard. In this case, the plastic bubble shell over the skylight opening did not meet the guarding standard, and the victim fell through the opening when he accidentally stepped on the shell.

Recommendation #2: Employers should lock all doors that provide access to unguarded rooftops.

Discussion: The rooftop where the incident occurred was frequently used by employees for breaks. It had also been designated by the company as an exit area for emergency evacuation. The roof was not designed for these purposes, but the company did not prohibit access to the rooftop. Entrance to hazardous areas through doorways should be controlled with doorlocks, and should be marked with warning signs. While not directly a cause of this fatality, the unsafe practice of using the rooftop for breaks placed the victim and co-workers at risk of falling through skylights and from the roof edge.

Recommendation #3: Employers should provide training in the recognition and avoidance of unsafe conditions to workers who are assigned tasks outside their normal duties.

Discussion: The victim’s primary job responsibilities were in the plastics manufacturing process. Shoveling snow from a rooftop was outside of his normal duties, and presented hazards that may not have been immediately evident to the worker. When workers are expected to perform additional duties that place the worker at risk, the employer should instruct the worker on those risks and how to avoid them. 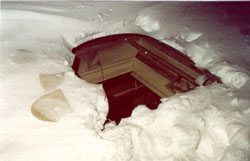 Figure 1. This picture shows the broken skylight where victim fell. 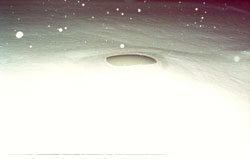 Figure 2. This picture shows an adjacent skylight, which was unguarded and snow covered. 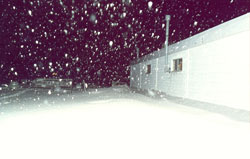 Figure 3. This picture shows the rooftop view with snow drifts over the skylights.

Staff members of the FACE Project of the Wisconsin Division of Public Health do FACE investigations when a work-related death is reported. The goal of these investigations is to prevent fatal work injuries in the future by studying: the working environment, the worker, the task the worker was performing, the tools the worker was using, the energy exchange resulting in fatal injury and the role of management in controlling how these factors interact.