A 32-year-old male crew leader (the victim) died after a forklift load carrier with a shop made attachment fell from the forklift as he was passing underneath it. The victim was working with the forklift operator and four other co-workers in the yard of an asphalt equipment manufacturing company where the forklift was being used to lift one end of a large silo. The company had equipped the forklift with a commercially-manufactured load carrier and a shop made bracket fitted with a square pipe. The pipe was placed inside the silo, then the forks were raised to about 12 feet until one end of the silo was lifted off the ground. The loader operator had shifted the loader to neutral when the victim started to walk under the load carrier and bracket to measure the silo. The load carrier and bracket suddenly fell from the forklift and struck the victim. The co-workers removed the pieces of equipment from the victim, saw that he was seriously injured, and called for emergency services. He was transported to the hospital, where he was pronounced dead.

The FACE investigator concluded that, to prevent similar occurrences, employers should:

On April 24, 1995, a 32-year-old lead worker died after a load carrier with a shop made attachment fell from a forklift and struck him as he passed under the carrier. The Wisconsin FACE field investigator was notified by the Wisconsin Department of Industry, Labor and Human Relations, Workers Compensation Division, on May 9, 1995. On July 13, 1995, the field investigator visited the incident site and met with a company representative. The FACE investigator also obtained incident-site photographs, the death certificate, and reports from OSHA, the coroner, Workers’ Compensation, and the state climatologist.

The employer was an asphalt equipment manufacturer that had been in business for two years, with 35 employees. This was the first fatality the company had experienced. The plant superintendent directed a written company safety program and participated on a safety committee composed of two supervisors and five additional workers. The written safety program included direction that employees should not stand or pass under elevated forklift equipment. Weekly safety meetings were held for all employees, and had been conducted by the victim when he worked as evening crew leader.

The company site included an indoor shop with a separate office area, and an assembly yard where the silos were finished and prepared for shipping. The company used a 1983-model forklift to lift the silos for finishing. The forklift was equipped with a load carrier, attached to brackets on the forklift mast. The load carrier was commercially-produced, but the forklift manufacturer had not been contacted for recommendations about attaching non-manufacturer equipment. The carrier had four forks, and the two center forks held a shop made bracket welded to an 8-foot long, 4″ square pipe (See Figures 1 & 2). The load capacity of the original loader was 5000 pounds at 24 inches, but the load capacity of the loader with the carrier and shop made attachment had not been determined. A decal on the forklift included a warning against standing or passing under elevated portions of the truck.

On the day of the incident, the weather temperature reached a high of 57 with no precipitation and wind around 18 mph. The victim began working at 7:00 A.M., performed routine duties throughout the day, and at 2:30 P.M. he was working with the forklift operator and four other co-workers in the silo assembly area of the company yard. They were preparing to weld one end of a 40-foot long, 11½ foot diameter silo that was lying on the ground, by using the forklift with the pipe attachment to lift one end of the silo. The pipe was inserted inside the silo, then the forks were raised to about 12 feet until the end of the silo was lifted off the ground about one foot. The loader operator had shifted the loader to neutral and was not operating the controls at the time of the incident. The victim walked under the forks with a tape measure to measure the silo, when the load carrier with the bracket and pipe attachment suddenly fell and struck him. The load carrier bracket apparently slipped off the lift mast, causing the load carrier and the pipe attachment to fall. The co-workers removed the pieces of equipment from the victim, saw that he was seriously injured, and called for emergency services. He was transported to the hospital emergency room, where he died.

The coroner’s report listed the cause of death as severe head and chest injuries.

Recommendation #1: Employers should use appropriate equipment, such as a crane, when lifting heavy and massive objects.

Discussion: In this incident, the company was using a forklift with modified equipment to lift one end of an 11½ by 40 foot silo of unknown weight. Lifting equipment specifically designed for heavy and bulky objects should be used whenever the load is outsized or heavier than the capacity of general lifting equipment.

Note: Subsequent to the incident, the company has been using a crane to lift the silos.

Discussion: The forklift in this incident was equipped with a load carrier and shop made bracket with lifting pipe that had not been approved for use by the forklift manufacturer. The additional and modified equipment may not have been secured firmly enough to the forklift to hold the lifting equipment and load. The OSHA standards 29 CFR 1910.178(a)(4) and 1910.178(q)(6) require manufacturer approval before modifications or additions are made to industrial trucks.

NOTE: On March 24, 1995, the Proposed Rule for Powered Industrial Truck Operator Training was published (Federal Register / Vol. 60, No. 49, 13782-13831). OSHA is proposing to revise the general industry safety standard for training powered industrial truck operators to mandate operator training and periodic evaluation of operator’s performance. Refresher or remedial training also would be required, based primarily on unsafe operation, an accident or near miss, or findings during the evaluation. 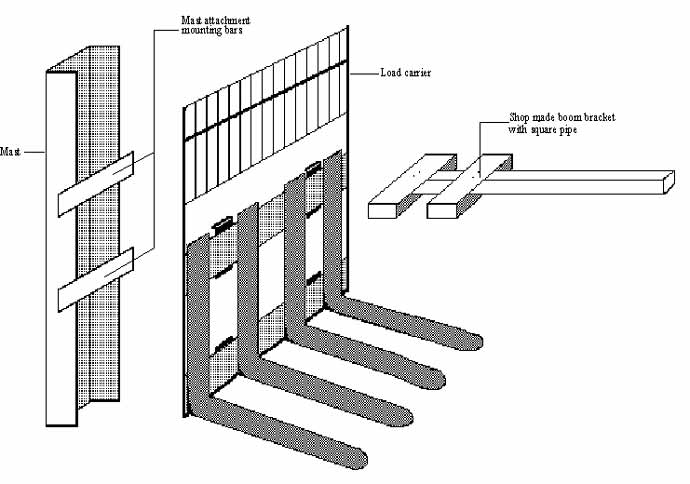 Staff members of the FACE Project of the Wisconsin Division of Health, Bureau of Public Health, conduct FACE investigations when a work-related fatal fall or machine-related death is reported. The goal of these investigations is to prevent fatal work injuries in the future by studying: the working environment, the worker, the task the worker was performing, the tools the worker was using, the energy exchange resulting in fatal injury and the role of management in controlling how these factors interact.