On October 4, 1999 a 47 year-old male plumber died when he was struck by the bucket of a backhoe while he was repairing a water line in a trench for a shopping center. The victim and an apprentice plumber were at the bottom of the trench removing straight and angled cast iron pipes and placing them in the backhoe bucket. The operator of the backhoe was an employee of the shopping center. The operator told the police investigator that when he released all controls, the bucket swerved to the left striking the victim on his left side and pinning him against the trench wall. The operator called EMS at 11:26AM, who arrived at the scene in 3 minutes. The victim had no pulse or respiration. EMS administered CPR. Ambulance personnel removed the victim from the hole and transported him to a hospital where he was pronounced dead of blunt force injuries to the chest. The manner of death was determined to be accidental. Hospital personnel told a police officer that death was caused by a ruptured myocardium (heart).

The Texas FACE investigator concluded that to reduce the likelihood of similar occurrences, employers should:

On October 4, 1999 a 47 year-old male plumber for a plumbing contractor in Texas died when he was struck by the bucket of a backhoe while repairing a water line in a trench near a shopping center. The regional OSHA office notified the Texas FACE program manager of the incident on October 18, 1999. The Texas FACE program manager visited the site on December 22, 1999. She interviewed the manager/owner of the plumbing company, the shopping center management firm, and the safety director of the equipment rental firm. She was not successful in contacting the backhoe manufacturer due to scheduling conflicts. She was able to obtain the OSHA-36 and backhoe specifications from the rental firm. She reviewed the EMS, Police Department and medical examiner’s reports.

The plumbing company manager/owner directed the employer’s safety program and a written safety program was in place. However, written safe work procedures specific to the victim’s task were not included. Safe work procedures were regularly discussed before jobs were begun and after injuries occurred. Required personal protective equipment included steel-toed shoes, proper gloves, safety glasses (when needed), and hard hats.

The company did not conduct pre-employment physicals and drug screening.

The victim had been employed with the company for 15 years as either a pipefitter or plumber. He also was trained to operate backhoes.

This was the first fatality experienced by the employer.

Work began on Friday, October 1, 1999. A trench had to be excavated to reach the pipe. (NOTE: The trench had been filled in by the time of the site investigation. Information was obtained from interviews, statements from witnesses, police report, and from pictures taken right after the incident by the employer and OSHA.) The trench was an oblong shape measuring approximately 31 feet long. One end was about 5 feet wide and the other end, where the incident occurred, was approximately 12 feet wide. The trench depth was 6 feet at the edges going down to 7 feet where the pipe was located. About 6 to 8 inches of water was on the bottom of the trench (see Picture 1 and Diagram). There was no shoring, shielding, or sloping of the trench walls. 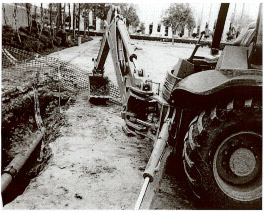 Picture 2. Bucket and Boom of Backhoe.

An employee (hereinafter referred to as “operator”) of the shopping center operated the backhoe to dig the trench. He had been with the firm for approximately 13 years and was in charge of the safety of personnel, property, and the public for the mall. He had training on operating backhoes prior to employment with the firm and had operated the same model of backhoe on jobs at the shopping center with the plumbing contractor. However, operating a backhoe was not part of his regular duties. The operator had requested this particular model of backhoe be used, instead of the backhoe the plumbing company owned. According to the operator, the victim asked him to operate the backhoe because he was more familiar with that particular model.

The backhoe was a farm tractor type, all-purpose backhoe/loader with rubber tires and a 75 HP, diesel, 4-cylinder engine. It had a general purpose 18″ bucket weighing 255 lbs. with foot controls to swing it left (left throttle) and right (right throttle). Hand levers raised, lowered and extended the two part 430 lb. boom with the bucket attached at the end (see Picture 2) to a maximum of 25.5 feet.(1) It had outriggers for stabilization which were in position on the day of the incident. The backhoe was positioned about four feet from the edge of the trench on the asphalt parking lot behind the curb. The boom with attached bucket was extended and angled over and down into the trench. The operator, if sitting in the seat of the backhoe, could not see activity down in the trench.

The repairs were scheduled to take two days, beginning on Friday. But on Saturday water was observed in the hole and it was determined that the pipe needed further repair. They could not get the correct pipe until Monday, so they did not work on Sunday. On Monday, October 4, 1999, the weather was dry, warm, cloudy, and slightly breezy. The victim, the apprentice plumber, and operator arrived at the site between 8:30 and 9:00AM. In order to repair the leak, the victim and apprentice plumber had to remove the two sections of the old pipe and install new pipe. The pipe sections were cast iron and were 10 inches in diameter with the straight section three feet long and the other section a ninety degree angle section or “L” joint. The straight piece weighed about 10 lbs. and the “L” joint weighed between 30 and 40 lbs.

At about 11:15AM, the victim and apprentice plumber were in the trench trying to assemble the three foot section to the 90 degree “L” joint but there was not enough room to work and there was still a large amount (6 to 8 inches) of water in the hole. They decided it would be easier to work on connecting the two pieces outside the trench and then return the assembled unit to the trench to connect to the other pipe lines. To get the pipes out, they decided to place them in the bucket and have them raised out of the trench.

The bucket of the backhoe was positioned about four feet down in the trench close to the pipe line. The victim was facing east about one foot directly to the left and in the line of contact with the bucket. The apprentice plumber was also to the left of the bucket but out of its reach and was facing west looking at the victim. (See Diagram)

At 11:20 AM the “L” pipe had just been placed in the bucket by the victim and apprentice plumber when, unexpectedly, the 255 lb. bucket with the approximately 40 lbs of pipe swung swiftly to the left and struck the victim in the left arm and upper chest, shoving him about six inches and pinning him into the south trench wall. The apprentice plumber yelled at the operator who maneuvered the bucket to the right to release the victim, who then slumped to the ground, groaning.

The operator called EMS at 11:26AM, who arrived at the scene in 3 minutes. The victim had no pulse or respiration. EMS administered CPR. Ambulance personnel removed the victim from the hole and transported him to a hospital where he was pronounced dead of blunt force injuries to the chest. The manner of death was determined to be accidental. Hospital personnel told a police officer that death was caused by a ruptured myocardium (heart).

The backhoe manufacturer sent inspectors to check the equipment. According to the inspectors they did not find anything wrong with the backhoe.

The operator told the police investigator that when he released all controls, the bucket swerved quickly to the left. Nobody witnessed the operator’s movements during the incident.

The medical examiner determined that death resulted from blunt force injuries from an accident.

Recommendation #1: Employers should ensure that backhoe operators shut down backhoes according to the manufacturer’s directions and direct workers to remain an adequate distance from operating backhoes

Discussion: According to the apprentice plumber, the backhoe was running with its bucket positioned about four feet down in the trench directly in line of contact with the victim. If the backhoe had been shut down properly and had workers been directed to remain an adequate distance from the backhoe the fatality may have been averted.

Discussion: In work involving trenches OSHA requires a competent person to be responsible for trench activities. OSHA defines a competent person as: “…one who is capable of identifying existing and predictable hazards in the surroundings, or working conditions which are unsanitary, hazardous, or dangerous to employees, and who has authorization to take prompt corrective measures to eliminate them,” (2)

A competent trench worker should be able to perform the following duties. (3)

Having employees in the trench when the backhoe was running was a hazardous condition due to several factors: the vibration of the soil caused by the running machine; the overhead load of the bucket and boom; the limited visibility by the backhoe operator of activities in the trench. Under any of these conditions, the competent person should remove the exposed employees from the trench until hazards have been controlled.

Recommendation #3: Employer should ensure that workers are protected from cave-ins by an adequate protective system.

Discussion: Discussion: 29 CFR 1926.652 (a) (1) states that “each employee in an excavation shall be protected from cave-ins by an adequate protective system.” A protective system designed for the soil conditions found in this excavation could have included a trench shield (also known as a trench box), shoring, or a combination of shoring and shielding. Employers should consult tables in the appendices of the OSHA Excavation Standard that detail what is required depending upon the type of soil and environmental conditions present at the site. Employers can consult with manufacturers of protective systems to obtain detailed guidance for the appropriate use of these products. In this incident, no protective system had been placed at any point in the 31 foot long trench. Although the victim in this incident was not killed because of a trench cave-in, protective systems should always be used in trenches greater than 5 feet deep.(4)

Back to Texas FACE reports