A 57-year-old asphalt roller operator and a 35-year-old crew foreman died on November 23, 1999, from multiple traumatic injuries received when they were struck by a light pickup truck traveling at a high rate of speed through a construction work zone. At the time of the incident, the victims were part of a six-man paving crew that had just begun laying an asphalt median crossover in the initial stages of a major construction project on a divided highway. Both the foreman and the operator were standing at the west side of a paving machine that was positioned in the median at the inside edge of the inside southbound lane. The 17-year-old driver of a light pickup truck traveling southbound in the inside lane at a high rate of speed allegedly looked down to adjust the radio and veered across the edge line, striking and killing both workers.

Local authorities should consider increased use of public information campaigns to increase public awareness of the hazards to both work zone personnel and drivers, particularly for construction projects in areas of high traffic volume.

A 57-year-old asphalt roller operator and a 35-year-old crew foreman for a paving contractor died on November 23, 1999 from multiple traumatic injuries received when they were struck by an light pickup truck traveling at a high rate of speed through a construction work zone. OKFACE investigators reviewed the OSHA Fatality/Catastrophe Report, the OSHA investigation report, the death certificate and medical examiner’s report for each victim, a copy of the report filed by the Oklahoma Highway Patrol investigating officer, newspaper articles, and the project bid specifications. While conducting the site survey, the investigators interviewed the company’s Human Resources/Safety/Security Manager and an official with the Oklahoma Department of Transportation.

The paving contractor employs approximately 150 people and has been in business for fifty years. The company had employed the deceased roller operator for approximately seventeen years and the deceased foreman for approximately five years. The crew had initiated work at this site approximately 90 days before the date of the incident, and both victims had worked at the site intermittently since the project’s inception. The company has a formal safety program, including general written policies and practices and extensive safety training requirements, and both victims had received work zone safety training. According to the program and to training records, all new employees received four hours of classroom safety training and four additional hours of on-the-job training upon assignment. They received an employee handbook that contains the company’s general employment, safety and health, and operating policies and procedures. Additionally, supervisors participated in the Associated General Contractors of America (AGC) road construction apprentice program and the National Asphalt Pavement Association paving superintendent training program. Project foremen were required to conduct a weekly safety meeting and project “bumper meetings” (a brief meeting of all site personnel) every morning that included safety topics. Three times each year a meeting was held in company offices during which safety training was also conducted.

In preparation for extensive construction work on a heavily traveled divided highway, the paving contractor crew was installing a paved median crossover. The work zone was located in an area in which southbound traffic experienced a slight curve toward the southwest (right) with a generally level road surface and slight grade toward the south. Because the road curved slightly to the right, preceding vehicles (particularly large trucks) may have obscured a driver’s view of the men and equipment positioned in the median. The actual work was being performed 0.65 miles south of an intersection in which traffic in all directions was controlled by stop signs. The existing road surface was asphalt, and the median was approximately 64 feet wide. The incident occurred at approximately 3:30 pm, and weather conditions at the time of the incident were dry and partly cloudy.

According to the company’s Safety Manager, the work zone plan was established in accordance with state Department of Transportation requirements and filed with the agency before the project began. Work zone traffic control devices were to include construction zone warning signs and reduced speed limit signs (45 miles per hour). These devices were installed for northbound traffic, and the northbound inside lane had been closed with standard warning barrels to permit truck entry into the work zone. Signs had not been installed for southbound traffic nor had the southbound inside lane been closed. Plastic cone markers had instead been set at the inside edge line of the southbound lanes (generally in accordance with the Manual on Uniform Traffic Control Devices, Part VI, Figure TA-6 “Shoulder work with minor encroachment”) to demarcate the work zone (Figure 1). 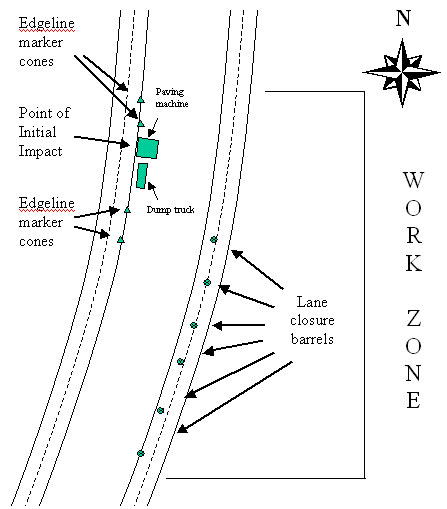 The Medical Examiner listed the cause of death for both victims as multiple traumatic injuries.

Recommendation #1: Employers should consider all applicable elements of a traffic control management program in accordance with the degree of risk to personnel in a work zone.

Discussion: Inattentiveness of the public motorist and consequent intrusion of the vehicle into the work zone was the underlying cause of the fatal incident; however, driver behavior is not under complete control of the employer in the work zone. Accordingly, employers must protect work crews by planning for and providing traffic control device(s) that are appropriate for the conditions of and tasks within the work zone. Proper warning signs, adequate barriers or barricades, and temporary lane closure, all of which are acceptable methods according to the Manual for Uniform Traffic Control Devices (MUTCD) (http://mutcd.fhwa.dot.gov/external icon), could be implemented while a high-risk operation is underway in a work zone. Building Safer Highway Work Zones: Measures to Prevent Worker Injuries from Vehicles and Equipment is an additional resource document that is available from the National Institute of Occupational Safety and Health (https://www.cdc.gov/niosh/topics/highwayworkzones/). (Link updated 3/26/2013)

High-risk operations, for purposes of this discussion, are situations in which workers must be positioned, unprotected by a physical barrier, within six feet of an active traffic lane with a speed limit in excess of 30 mph. At a speed of 45 mph a driver need only veer 1.7 degrees from the roadway edge line for a time period of 3 seconds to collide with an object that is 6 feet outside of the edge line. This slim margin for error, combined with the force generated by a heavy vehicle traveling at this speed, defines an extremely critical risk for an exposed worker by every credible risk assessment model. The MUTCD lists the following program elements that should be considered to reduce such a risk to personnel in a work zone: 1) employee training, 2) worker clothing, 3) barriers, 4) speed reduction, 5) use of police, 6) lighting, 7) special devices, 8) public information, and 9) road closure.

The application of each program element should be considered in the bidding of project work and adequately applied by work crews as the project progresses. Safety and crew management personnel should be sufficiently familiar with these elements and the options they provide, and they should be capable of deploying the appropriate protective measures in accordance with the pre-established work plan or otherwise in an abnormal or unusual circumstance.

Discussion: Physical separation of the worker from the hazard of moving traffic (lateral buffer zone) in accordance with the MUTCD provides an important means to reduce the risk to personnel in a work zone. Although lane closures impede traffic flow and are consequently an unpopular hazard control, employers should close the adjacent lane whenever workers must be positioned close to the roadway edge line.

Recommendation #3: Employers should consider deploying flaggers and/or traffic monitors when high-risk operations must be engaged, particularly for short periods of time when the use of barriers is not practical.

Discussion: Driver behavior is perhaps the most critical issue in work zone fatalities. Activities and actions, such as deployment of a flagger in accordance with the MUTCD guidelines and OSHA regulations, that provide sufficient warning and adequately gain the attention of drivers to the imminence of the hazard offers an important opportunity to reduce this risk. The use of a crew member as traffic monitor for individuals whose attention cannot be focused on the traffic hazard can provide a secondary protection for workers. A monitor can notify exposed workers, giving them the opportunity to leave the high risk area when a driver is encroaching on the work zone for any reason (e.g., inattention or chemical impairment).

Recommendation #4: Employers should use a particularly high-visibility device at the beginning of road channelizing demarcation to increase the visibility of the impending hazard.

Discussion: The plastic cones used as channelizing devices to demarcate the work zone at the point of the fatal incident did not gain the attention of the driver of the intruding vehicle. The use of barrels as channelizing devices for closing the lane at the entrance to the work zone may serve to better attract the attention of a driver to the impending hazard posed by the roadside work. This type of device must be positioned at a sufficient distance from worker positions so that flying debris does not strike workers should an a motor vehicle strike the device.

Recommendation #5: Employers should develop and implement a formal occupational health and safety management system that is focused on continual improvement.

Discussion: The dynamic nature of the contemporary workplace necessitates a management model that ensures continual improvement in virtually all aspects of the business. This principle is particularly critical with regard to the management of workplace health and safety, which must be integrated into all operational aspects of an organization’s business plan. While implementation of a formal management system may or may not have directly prevented the incident, it could have encouraged and facilitated the identification and correction of deficiencies, including performance deficiencies, which may have served as contributing causes. Implementation of a management system is a useful and achievable goal for any employer that seeks to reduce occupational injuries and illnesses.

Discussion: Witnesses implicated vehicle speed, a chronic problem in highway work zones, as a factor in this incident. High speeds decrease driver reaction time thus increasing the risk to personnel in a work zone; therefore, efforts to reduce vehicle speed are an important means for controlling the risk presented by high-risk operations. The use of mechanical or human resources to monitor and control vehicle speed, including immediate feedback to drivers exceeding the speed limit and legal action for violators, is an important risk reduction method, particularly in project areas subject to high traffic volume.

Recommendation #7: Local authorities should consider increased use of public information campaigns to increase public awareness of the hazards to both work zone personnel and drivers, particularly for construction projects in areas of high traffic volume.

Discussio: The MUTCD and Building Safer Highway Work Zones present public information as an element of a traffic management plan. Such campaigns offer the opportunity to positively impact driver behavior, an issue critical to work zone safety. Some efforts of this type have been undertaken; however, more resources directed toward public information activities may increase driver awareness of the hazards presented by work zones to both motorists and workers.

The Oklahoma Fatality Assessment and Control Evaluation (OKFACE) is an occupational fatality surveillance project to determine the epidemiology of all fatal work-related injuries and identify and recommend prevention strategies. FACE is a research program of the National Institute for Occupational Safety and Health (NIOSH), Division of Safety Research.

These fatality investigations serve to prevent fatal work-related injuries in the future by studying the work environment, the worker, the task the worker was performing, the tools the worker was using, the energy exchange resulting in injury, and the role of management in controlling how these factors interact.