Assemblyman Dies from Injuries Received in the Failure of a Gasket During a Hydrostatic Test.

A 43-year-old assemblyman died on May 26, 1999 from chest injuries he received earlier that day when struck by a high pressure water jet emitted after the failure of a gasket during a hydrostatic test of a cooling coil for an air cooled heat exchanger. At the time of the incident the victim was part of a two-man team conducting the hydrostatic test at a heat exchanger manufacturing company. The laborer was positioned on a stepladder near the heat exchanger coil manifold to close an isolation valve on the pressure line connected to the manifold flange when the gasket failed, releasing a high pressure water jet in the direction of the worker. The water struck the assemblyman in the chest knocking him approximately 20 feet off the end of a loading dock onto the concrete drive below. Another employee nearby immediately contacted 911 by mobile phone and the victim was evacuated by helicopter to a local hospital where he died from injuries sustained in the incident. Face investigators concluded that, to help prevent similar occurrences, employers should:

A 43-year-old assemblyman for a heat exchanger manufacturer died on May 26, 1999 from chest injuries he received earlier that day when struck by a water jet emitted after the failure of a gasket during a hydrostatic test of a heat exchanger cooling coil. On August 10, 1999, OKFACE investigators, accompanied by a Safety and Health Specialist from the Division of Safety Research, National Institute for Occupational Safety and Health, conducted an on-site investigation of this incident. Investigators reviewed the OSHA Fatality/Catastrophe Report, the death certificate, and the medical examiner’s report prior to making a site visit. While conducting the site survey, investigators interviewed the company’s Director of Operations, the Human Resources Manager, and the contracted safety consultant.

The heat exchanger manufacturing company employs approximately 146 people of whom 60 are office and administrative employees and 86 are technicians and laborers who operate two shifts. The company has been in business for 47 years with no fatal incidents prior to the date of this fatality. The company had employed the victim, a production technician, for approximately 26 years. The company’s safety program, including general written policies and practices, was formalized in 1997. The program initially focused on improving the work environment. Subsequent to its inception, safety performance metrics based on medically treated injuries has shown an 82 percent reduction in injury severity and 56 percent reduction in frequency. The safety program includes a labor/management safety committee that is responsible for reviewing all incidents, discussing health and safety issues, identifying workplace hazards, and developing monthly safety training topics. Work procedures for the task being performed by the victim at the time of the fatal injury did not specifically address safe work practices. Employees operating any machinery participate in an on-the-job training program; the victim had participated prior to the incident. The program content is determined by the skill level of the individual. Supervisors or lead technicians conduct training and evaluate its effectiveness by observing the trainee’s performance. All production employees participate in monthly safety meetings that are conducted in small groups with content that is determined by the joint union/management safety committee. Welders must be certified and competence must be demonstrated. The company has a full-time employee whose responsibilities are dedicated to safety and quality control. The company contracts the services of a safety consultant to provide additional technical expertise. Safety committee members are expected to provide leadership regarding safety performance.

Each heat exchanger coil must be hydrostatically tested in accordance with the company’s quality program. The heat exchanger coils are constructed of several rows of steel tubes through which water is circulated during operation of fully assembled units. Preparation for the test may require as little as 15 minutes or as long as several hours, depending on the size of the unit. The coils are placed near the north end of the manufacturing building for test preparation. Standard procedures require the set-up crew to connect a water hose to the manifold and to fill the lower coil tubes first to prevent entrapment of air in the system, a condition that is recognized as a serious hazard. Once the coil is completely filled with water and has been “vented” to bleed off any air that may have become trapped in the coil during the filling procedure, the testing unit is connected to the manifold through a riser that is equipped with an isolation valve and pressure gauge. A gasket is inspected and inserted between the riser and the manifold flange before the mounting bolts are installed and tightened using a standard criss-cross tightening pattern as recommended by the gasket manufacturer. Normally, the torque is checked two or more times after the bolts are initially tightened. The testing unit is equipped with a pressure relief device that, through the use of calibrated equipment, is manually set commensurate with the test pressure to be achieved in any given test. Once the coil is pressurized to the pre-determined level, the team must close the isolation valve and allow the static pressure to be sustained for a specified period of time. While the unit is pressurized, trained and certified quality personnel must visually inspect the unit for leaks. The individual must climb on the unit while the pressure test is being conducted to complete this procedure.

The coil being tested at the time of the fatal incident measured approximately 40 feet in length and 12 feet in width. A team other than the crew who eventually conducted the test prepared the coil for a test pressure of 3100 psi, slightly higher than average but significantly less than some pressure tests performed at the facility. The gasket material in use at the time of the incident was rated to a test pressure of 1450 lbs/in 2 while the test pressure at the point of failure was approximately 2900 lbs/in 2. Standard criss-cross bolt-up and torque check procedures were apparently not followed in this preparation but rather a circular bolt-up pattern was used with no additional torque check. These deviations from standard practices left one or more bolts not properly tightened, ultimately contributing to the failure of the gasket. Inspection of other flanges following the incident revealed some loose bolts. The equipment used to set the safety relief device had been recently calibrated and the calibration records were available at the time of the investigation. Once the test pressure was achieved, the assemblyman climbed a three-step ladder and was attempting to close the isolation valve on the riser when the gasket suddenly failed, emitting a jet of water. The water jet struck the assemblyman in the chest knocking him approximately 20 feet off the end of the nearby loading dock onto the concrete drive approximately 4 feet below the shop floor level. According to the medical examiner’s report, the victim suffered multiple contusions, abrasions and lacerations to the head, trunk and extremities, multiple fractured ribs, and a transected aorta. A nearby quality inspector witnessed the incident and immediately called 911. An emergency medical services helicopter was dispatched to the site and the victim was transported to a local hospital where he died approximately five hours later of injuries sustained in the incident.

Reportedly, a similar incident had occurred the previous evening, but no one had been injured in the earlier incident. Employees also indicated previous failures of the gasket in use at the time of the incident.

The medical examiner listed the cause of death as blunt chest injury.

Recommendation #1: Employers should incorporate specific safe work practices into the work instructions for setting up and conducting hydrostatic testing, and train workers in those practices.

Discussion: The absence of procedures critical to safe execution of a task and other safety-related language from the written work instructions increase the risk that workers may not receive proper safety instructions or may use unsafe work practices while discharging their responsibilities. The first step in ensuring that employees follow safe work practices in the performance of their work is the development of documented procedures, including in this case specific vessel filling, bolt-up and torque check procedures. Equally as important is proper instruction and training on those procedures and practices for employees as they learn to perform their work. The presence of documented work instructions providing procedures, including a specific bolt-up pattern and torque checks with a calibrated torque wrench, and specific training of all individuals performing those tasks regarding the documented procedures, may prevent this type of fatal incident.

Recommendation #2: Employers should provide the proper materials and equipment for use in performing high-risk work.

Discussion: The gasket material used in the failed test was rated for use at a pressure less than fifty percent of that to which the test was to be conducted. Reportedly, test crews had experienced gasket failures on previous tests involving this particular coil design. The use of gasket materials rated for the conditions of the test may prevent gasket failure and reduce the risk of consequent injury or fatality. Additionally, information provided by the gasket manufacturer recommended the use of a calibrated torque wrench during the bolt-up process. The use of such a device to ensure proper bolt tightening may prevent gasket failures that can result in injury or fatality.

Discussion: Witnesses indicated that gaskets had failed previously and that a blowout without injury had occurred on the evening prior to the fatal incident. These so-called “near-miss” incidents offer employers the opportunity to analyze failure in either the engineered system or the management system and take corrective action before such failures result in an injury or fatality.

Recommendation #4: Employers involved in hydrostatic tests of large heat exchangers and similar equipment should provide barrier protection for employees who must work in close proximity to potentially weak points in the hydrostatic test system or provide a remote control to physically separate the employee from the high-risk area.

Discussion: The riser connection and isolation valve represent key opportunities for structural failure during a hydrostatic test. Employees who must work in close proximity performing such activities as operating the valve are at increased risk of serious injury in the event of a failure. The use of a structural barrier with the use of a remote controlled valve may be an alternative safety measure in some instances. The use of personal protective equipment should be considered for employees who cannot be protected by such a barrier. They might include a hard hat with face shield to protect the head and face and penetration-resistant vests to protect the torso. 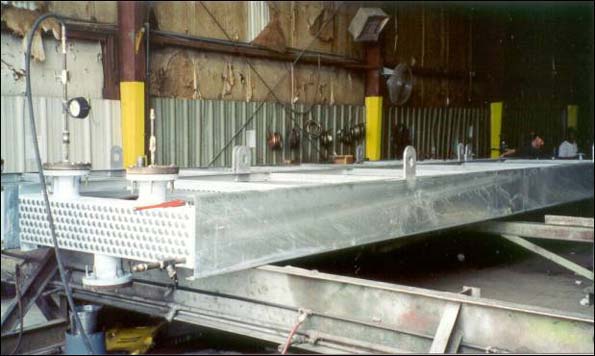 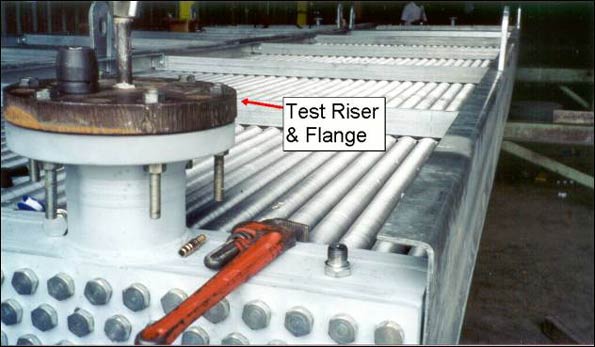 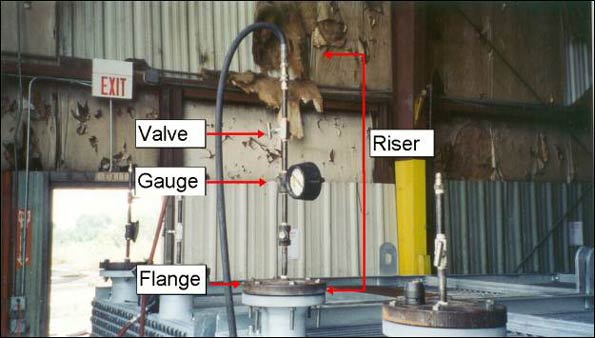