On March 15th, 2002, a 41 year-old male feed mill worker died from asphyxiation as a result of entrapment and submersion in flaked corn. The victim had been filling a hopper bottom grain bin with steamed flaked corn on the day of the incident. It appears that as the bin became full, the worker went into the top of the bin to level the corn as an attempt to store the remaining corn. As the worker was standing on the corn surface, a subterraneous bridged pocket apparently gave way, allowing the victim to become entrapped in the flowing corn. His body became submerged and he was unable to breathe. The victim’s wife became concerned when he did not return from work, and she then contacted both the feed mill and the emergency responders. A coworker discovered the victim entrapped in the grain bin. The victim had worked for this mill for the past 20 years.

On March 18th, 2002, the New York State FACE program was notified of an agricultural-related fatality by a regional area office of the Occupational Safety and Health Administration (OSHA). This fatality occurred at a feed mill that produced animal feeds predominantly used by dairy farms. The victim was a 41 year-old male worker who had entered a hopper grain bin and became entrapped by the flaked corn inside of the bin.

At the time of the incident, this feed mill served a few hundred farms in a three county geographic region by supplying their animal feed and fiber needs. The family owned and operated feed mill employed 21 fulltime workers, and had been in business since 1935. This was the first serious injury to occur at this business. This business was very safety conscious and for the past 8 years had employed a safety consulting company which had set up training programs in order to meet all OSHA requirements and regulations which would apply to this business type. They had, in fact, conducted confined space entry training at different times. The victim had gone through confined space entry training on January 29th, 2002, six weeks prior to the incident.

On Friday, March 15th, 2002, the feed mill had been processing corn into steamed flaked corn. During this processing, the shelled field corn was run through a roller mill and then a steam process to create flaked corn that is more digestible as a feed ingredient to dairy cows. The mill would use this flaked corn as one component of a feed mixture that contains additional feed ingredients.

On this particular day, corn had been steam flaked and sent through the grain handling system to be stored in a gravity flow hopper bottom grain bin. This feed mill employs a central bucket elevator that carries the feed material up in a vertical direction where it reaches a dividing head that allows the material to gravity flow down into the appropriate bin. This dividing head is controlled electro-mechanically so the material can be remotely placed in whatever bin is desired. The flaked corn on this day was allowed to gravity feed into a round steel hopper bottom grain bin that was approximately 22 feet (approximately 5 “rings”) high and 9 feet in diameter with a 22 ton capacity. This gravity flow bin was located outside of the mill building, and was set up so that the material entered the top of the bin through a gravity drop chute from the bucket elevator. The bottom of the hopper then unloaded into an auger that would carry the material horizontally towards the mixing chamber at the feed mill (see Figure 1). 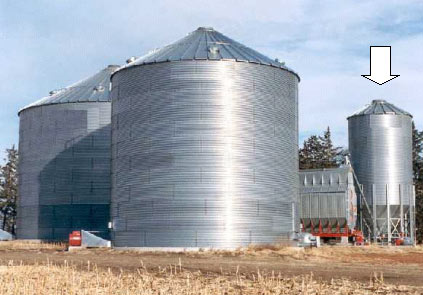 Figure 1. Example of a Hopper Bottom Bin on Farm

On this particular Friday at approximately 3:00 pm, the feed mill worker had been monitoring the transfer of the steam flaked corn from the mill into the hopper bottom grain bin. In reconstructing the incidents of the day, it is believed that as the worker monitored the filling of the bin, he noticed that the bin was full even though approximately one ton of material remained to go into the bin. The worker climbed the exterior ladder to the top of the grain bin where the 30-inch diameter opening hatch was located. He entered the bin and stood on top of the flaked corn that was only a few feet below the opening at the top. It is believed that he was leveling out the mounded corn in an effort to make room at the top of the bin for the last of the remaining material to be stored in the bin. When material is loaded into a bin from the top, the material creates a cone shaped mound. The remaining side space can be utilized for storage if this mound is leveled off and then the remaining corn can be loaded into the bin at the top. It is believed that as the worker was standing on the surface of the flaked corn, a bridged area underneath the center part of the grain bin collapsed. This caused flaked corn to flow down the center of the bin, engulfing the worker and pulling him down into the grain. The victim was pulled below the surface of the grain (Figure 2). 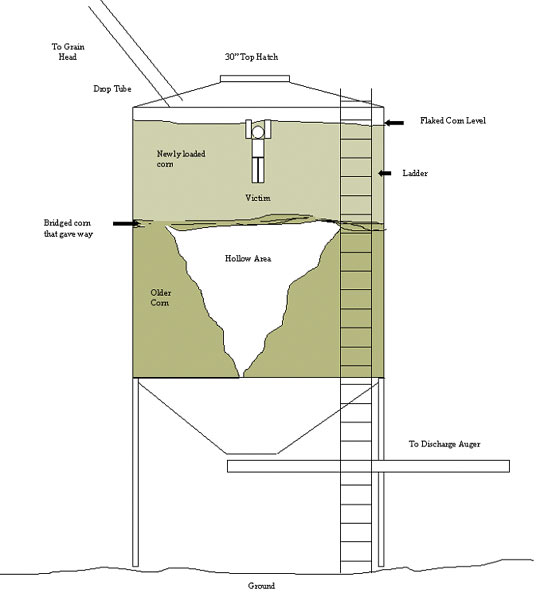 At approximately 6:00 pm the victim’s wife became concerned that her husband had not returned from work since he normally would have returned a few hours prior to this time. She called the feed mill looking for him, and employees who were still at the mill did not know where he was. She immediately called the rescue squad who responded to the feed mill location.

After the rescue squad’s arrival at the mill, it was noticed that the victim’s pick-up truck was still parked at the mill, so the rescue squad and some of the co-workers who were still at the mill at this time started searching the facility. One of the co-workers climbed up on top of this particular holding bin during his search, looked in through the hatch at the top, and could see the victim’s two hands sticking up out of the surface of the flaked corn. The rescue personnel responded to the site and it was determined that the victim was not alive. The local rescue personnel called for the regional advanced rescue team to assist with the extrication. The advanced regional rescue team responded to the scene and cut a hole in the side of the grain bin approximately level with the location of the victim’s body. This was done in a recovery effort, not in a life saving role. The rescue personnel removed the body from the grain bin and transported the victim’s body to the local hospital.

The bridging of grain in a storage bin can occur when the grain is wet and freezes together or also can occur under spoilage conditions that allow the individual grains to adhere together. If this adhesion occurs and then material is removed beneath this layer, a hollow area is created within the bin, leaving a false layer or “bridge” across the top of the grain. On the day of the incident, there was actually some freezing rain. Since steamed flaked corn has a high moisture content, the cold weather could have allowed any stored flaked corn from the previous day to freeze at the upper level, the crust level, where the flaked corn would be exposed to outside air temperatures. This bridging could have occurred from the freezing of the previous days’ corn. Then, when the new flaked corn was added on top of the existing material, it would have created this unstable bridge.

Another factor that contributed to this incident is the long workday of this victim. He had started work on that particular day at 3:45 am, and the incident occurred somewhere after 3:00 pm, approximately 12 hours after he had began work that day. This workman usually reported to work by 4:00 am and often left around 12:00 noon, although on certain days when they had a busy schedule, he may have worked a few extra hours. This particular day was a Friday, and Fridays were the busiest day in general at this mill, and so the victim had been awake for a long time and had worked a very full day at this point in his work schedule.

The cause of death was listed on the death certificate as asphyxia due to or as a consequence of a fall into a grain bin.

Recommendation #1: Employers should develop a comprehensive safety program that clearly documents standard operating procedures for safe entry into confined spaces, such as grain bins. This program should include, but should not be limited to, plans to:

Discussion: All employees who work in or around confined spaces should be aware of potential hazards, possible emergencies, and specific procedures to be followed prior to working in a confined space. In this instance, proper training had recently been conducted, however, the employee did not follow the training in that the victim neither informed anyone that he was entering the grain bin, nor did he have a co-worker accompany him to the bin. This suggests that evaluation must accompany training to ensure that workers are truly learning from safety training and that their knowledge and behavior is being modified.

In this case, a properly trained attendant, e.g., someone stationed outside of the confined space containing unstable material (i.e., flaked corn), could have provided assistance to the victim using rescue equipment and called for help immediately if assistance was needed. It is recommended that an attendant be present outside of the confined space for the duration of the entry operation and should maintain constant communication with the worker inside the area. If visual contact cannot be maintained, the attendant should at least maintain constant voice contact. Attendants should also be trained to:

Recommendation #2: Employers should consider retrofitting storage bins with a mechanical fill level device in an effort to minimize the need for workers to enter grain storage bins.

Discussion: Grain bins, silos, hoppers, or tanks where unstable materials are stored, handled, or transferred should be equipped with mechanical fill level devices. Devices of this nature would minimize the need for workers to climb and enter storage bins.

Recommendation #3: Employers should ensure that warning signs are posted at entrances to confined spaces containing a list of safe operating procedures.

Discussion: Signs to warn and remind workers of the hazards of unstable materials should be part of a confined space entry program. The sign should contain examples of dangers within the bin and the subsequent recommendations for safe entry into the bin. Safety signs, while helpful in the implementation of a program to control the hazards associated with confined spaces, are not in and of themselves, sufficient to provide the safety information needed to prevent grain bin-related fatalities.