Warehouse Checker Crushed Under a 4,000 Pound Crate Falling From a Forklift Truck

On April 26, 1996, a 25-year-old warehouse checker was critically injured after being crushed under a crate falling from a forklift truck. The incident occurred in a large warehouse as the victim was assisting a forklift operator in loading a 3,900 pound crate of plate glass onto a trailer. The crate, which measured 84 inches long by 71 inches high by 16 inches wide, was loosely set on the forks and leaning against the mast of the forklift. The victim stood to the side of the crate as the forklift drove towards the trailer and then stepped in front of the crate as it entered the truck. When the forklift passed over the docking plate, the unsecured crate was jostled and fell onto the victim. The victim was severely injured and died the next day. NJ FACE investigators concluded that, in order to prevent similar incidents in the future, these safety guidelines should be followed:

On August 28, 1996, NJ FACE personnel were notified through an OSHA fatality data printout (OSHA 36) of a work-related fatality involving a forklift truck that occurred on April 26, 1996. A FACE investigator contacted the company and arranged to do a site visit which was conducted on September 18, 1996. During the visit, FACE investigators interviewed the employer and reviewed two witness statements of the incident. Investigators also examined and photographed the incident scene and forklift. The crate involved in the incident had been shipped and was not available for examination. Additional information on the incident was gathered from the OSHA compliance officer, the police report, and the medical examiner’s report.

The employer was a large international freight terminal that handled the shipping and receiving of imported and exported goods. The company had been in business for over 28 years and employed 800 workers and 300 independent contractors (truck drivers) throughout the country. There were 93 employees at the incident site, including 47 who worked in the warehouse where the incident occurred. The company had a forklift operator certification program which used video, oral, and written presentations for training. Operators were required to pass a written and oral test and perform a forklift “road” test, which would certify them for a two year period. Training for the other warehouse positions was mostly on-the-job, where the employee would be instructed by a manager and then assigned with a experienced employee for two months. The employee was then informally evaluated by management for promotion. The company had a written safety program based on a job hazard evaluation which was conducted with the labor union. As this was a central examination station for customs, all employees were required to be bonded through the company and undergo a security check and drug screening.

The victim was a 25-year-old male warehouse checker who had worked for the company for five years. He was hired in 1991 as a “legman”, a laborer who unloaded shipping containers. He was promoted to forklift operator in 1993 after passing the certification program. In 1994, he was promoted to checker and was responsible for verifying the condition and contents of the shipping containers. It was noted that the victim had been trained and retrained on forklift operations on three separate occasions.

The company’s shipping terminal and warehouse were located in a urban industrial area. The 150,000 square foot warehouse was divided into two working areas for importing and exporting goods. Imported and exported freight were transported in shipping containers which resemble a large trucking trailer that can be easily loaded onto railcars or stacked onto ocean liners. Shipping containers containing imported goods are trucked to the facility and opened at a special loading dock which helps to prevent the unsettled freight in the container from spilling out when the doors are opened. The contents of the container are then unloaded and laid out for examination by the checker, who notes any damage and checks that the load corresponds with the freight manifest. Following verification, the goods are sorted out and released or shipped to the various owners. The export side of the warehouse works in reverse, where the freight from different shippers is consolidated by destination and loaded into a shipping container. The container is transported by truck to a shipping terminal where it is sent by rail or ocean liner. All imported and exported freight is subject to inspection by customs agents who maintain an office at the facility.

The incident occurred on Friday, April 26 in the export section of the warehouse. At about 4:30 p.m., a forklift operator was instructed by his foreman to load a trailer that was parked at the loading dock. As with all the forklift operators at the facility, the operator was a trained and certified driver who was assigned the same machine each day. He drove his 8,800 pound sit-down rider forklift (lifting capacity 5,000 pounds) to a large crate of plate glass that was leaning against a pole in the warehouse. The crate was unusually heavy for its size, weighing about 3,900 pounds and measuring 84 inches long by 71 inches high by 16 inches wide. The operator positioned his forklift under the crate (which was built to be moved on its narrow side) and moved it to the staging area. The forklift operator then packed foam around the crate to cushion it during shipping and raised the crate back up on the forks. Although the crate was leaning against the mast of the lift, it was unstable and moved back and forth slightly. At this time the forklift operator saw the victim walking by and asked for his help.

The victim had arrived for work at 5:00 p.m., coming in early so he could work some overtime before his usual shift started at seven. He had not yet been assigned to checking when the forklift operator asked him to help stabilize the crate on the lift. With the victim walking on the left side of the lift, the crate was moved to within 30 feet of the loading dock. The operator continued to move the lift very slowly until he was about 15 feet from the trailer, at which time the victim moved in front of the forklift. They continued until they were about five feet from the trailer when the forklift operator stopped the lift. He could not see the victim and asked if he was OK, to which he replied that he was “good, come on.” The operator again started to move the lift slowly towards a portable docking plate that bridged the gap between the dock and trailer.

The forklift operator did not see the victim as the lift went down the dip created by the docking plate. This dip was enough to destabilize the crate, which fell forward off the lift and onto the victim. The operator immediately yelled for help and was assisted by several other employees who unsuccessfully tried to lift the crate off of the victim’s chest. They quickly moved a forklift into place and raised a corner of the crate, creating enough room to pull out the victim. At this time the victim was alert and was heard joking with the rescuers. The police and EMS arrived and transported the victim to the local trauma center where he was admitted to the intensive care unit with severe crushing injuries. He died of his injuries the next day at 6:23 p.m., almost 24 hours after the incident.

The county medical examiner attributed the cause of death to traumatic asphyxia in association with blunt impact injuries of the pelvis and lower extremities.

Recommendation #1: The employer should ensure that established company safety procedures are followed at all times.

Discussion: The employer had an extensive safety program in place which was developed using a job hazard evaluation. This program included securing uneven loads to the forklift masts and a policy to always keep the spotter in sight. To prevent future incidents, FACE recommends that companies actively enforce their safety rules. Additionally, the company should consider having their forklift operators annually retrained and recertified to ensure that they are informed in job and safety procedures.

Recommendation #2: Employers should develop and implement a written procedure for handling dangerous or unusual forklift loads.

Discussion: Since the incident, the company has developed a procedure in which odd-sized loads will be secured to a standard pallet to make transporting with a forklift easier and safer. FACE commends this procedure and recommends that it should be part of the company’s written forklift safety program.

Discussion: The OSHA inspection of the loading dock area found a number of potential safety hazards. These included the portable docking plate not being properly secured due to a bent metal stop, a depression in the asphalt in front of the loading docks which caused a misalignment between the trailers and the dock, and missing wheel chocks for the trailers. Although FACE did not determine if these were direct factors in the incident, these conditions may make a trailer unstable for a forklift crossing into the truck. To prevent potential accidents, FACE recommends that employers should periodically inspect the loading dock areas to ensure that all equipment is present and in operating order. Employees should also be encouraged to report any potentially unsafe conditions to their supervisors. It was noted that the company immediately corrected the above hazards, including repaving the loading dock area. 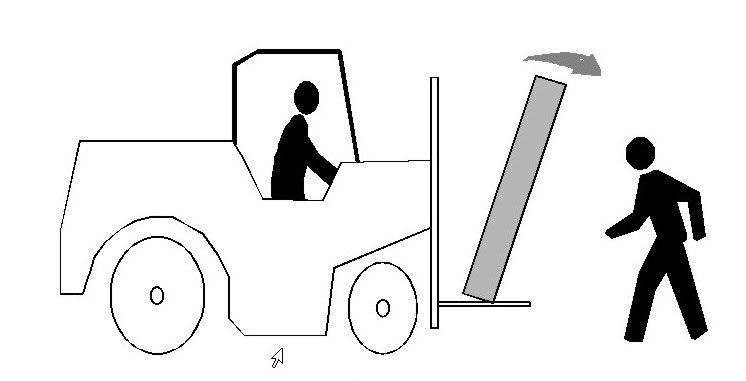