On May 15, 2002, a 44-year-old male rigger/spotter was fatally injured when he was run over by a mobile gantry crane at a concrete plant. The victim had worked at the plant for three years and was employed as a rigger/spotter for a large mobile gantry crane used to move concrete slabs in the plant yard. The crane was a box-like assembly of steel I-beams riding on four 62-inch-high rubber tires. With a lifting capacity of 100,000 pounds, the 30-foot-high, 45-foot-wide diesel- powered crane was operated by a worker in an elevated cab. The victim was walking ahead to spot for obstacles as the crane straddled a large concrete slab which blocked the operator’s view. A second spotter saw the victim on the ground after he had been run over by the right front wheel of the crane. The victim was airlifted and admitted to a regional trauma center where he died 15 days later of complications related to his injury.

On May 31, 2002, a federal OSHA compliance officer notified FACE staff of a worker who was killed in a machine-related incident. A FACE investigator contacted the company and arranged to conduct an investigation, which was done on November 6, 2002. During the visit, the FACE investigator interviewed the company safety officer and workers who were near the incident. The area was photographed from the ground and the crane operator’s cab. Additional information was obtained from the police report, the medical examiner’s report, and the OSHA investigation file.

The victim’s employer was a concrete plant that specializes in fabricating large concrete slabs for constructing buildings. The company has been is business for 25 years and owns two plants in two states, employing a total of 100 non-union workers. The New Jersey plant (incident site) has been in operation for eight years and employed 38 workers at the time of the incident. The company has a safety officer overseeing the two plants who enforces a comprehensive written health and safety program. A health and safety committee meets each month, and toolbox talks are held each week. Crane operators are trained on-the job and with videos, with retraining done every 12 to 18 months.

The victim was 44-year-old black male who had worked for the company for about three years. Hired as a laborer, he worked his first year inside the production plant before being promoted to rigger/spotter for the outdoor gantry crane. He worked regularly with the crane operator as a team and was described as a good worker. Previous work history included working as a lumberjack and a construction worker. The victim is survived by his wife.

The incident occurred in a concrete plant located in a rural area. The plant was purchased by the company eight years prior to the incident when the property was a large open concrete yard. Production and other buildings were constructed on the site and expanded as the facility grew. The manufacturing process at the plant starts with the construction of wooden forms in the recently-built carpentry shop directly adjacent to the concrete plant. The forms are transferred to the concrete plant and set up on one of several large, flat, vibrating tables. A batch of concrete is mixed and transferred to the form by a crane within the plant. The cast is poured, vibrated (to remove air bubbles), allowed to cure, and hand-finished with features such as decorative brickwork. The completed cast slab is moved outdoors for power-washing and placed on outdoor racks for storage. The slabs are later loaded onto flat-bed trucks for delivery to the customer.

The incident occurred on Wednesday, May 15, 2002. The victim arrived for work to begin the plant’s single 7:00 a.m. to 5:00 p.m. shift. He went about his usual duties, rigging loads and spotting for the plant’s single mobile gantry crane. This crane was a large, box-like assembly of steel I-beams designed to straddle a large load, lift it, and carry it to where it was needed (see Photo 1). 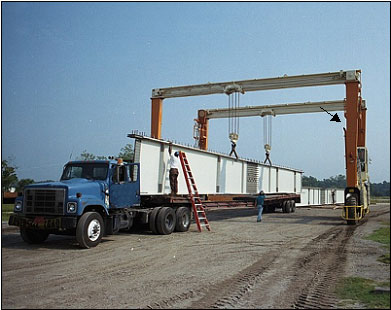 The diesel-powered crane had a lifting capacity of 100,000 pounds and measured approximately 45 feet wide by 38 feet long by 30 feet high. It rode on 62-inch-high pneumatic rubber tires and was run by an operator riding approximately ten feet from the ground in a raised cab. Although visibility from the operator’s cab was generally good, the crane had a number of blind spots and visibility was blocked when carrying or straddling a load. To compensate for this, a spotter would walk along with the crane to look for obstacles and direct the crane’s placement for loading and unloading. The spotter communicated to the operator with hand signals and shouted verbal commands. The company safety officer stated that the crane’s engine was governed to limit the crane’s speed to about four miles per hour.

The weather on the day of the incident was clear. Work that morning was uneventful, with the crane moving back and forth along the rows of storage racks. On this afternoon, a second employee was working with the crane crew, a truck driver who was also trained as a rigger / spotter. At 2:27 p.m., the two spotters were walking ahead of the crane to guide it across the yard. The victim walked on the right side if the crane, ahead of the right front wheel. The second spotter was on the left side as the crane moved forward to straddle a storage rack. This rack had a concrete slab stored lengthwise on its edge, creating a 15-foot-high wall that blocked the operator’s view of the right front tire. The second spotter was walking ahead of the victim when he looked back to see him on the ground, moaning after being run over by the wheel. He called out for the crane to stop and ran to notify the supervisor, who called 911. The victim was conscious but in severe pain with crushing injuries to his pelvis. Paramedic units arrived and requested a med-evac for the victim, who was airlifted to a regional New Jersey Level I trauma center. He was admitted to the center in critical condition with multiple fractures and internal injuries. Despite treatment, his condition deteriorated over the following fifteen days. He died of complications related to his injuries on May 30, 2002. 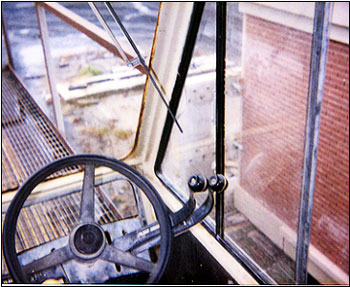 Recommendation #1: Employers should ensure that all machine guards are in place before operating equipment.

Recommendation #2: Employers should consider installing devices to increase the visibility of the crane operator.

Discussion: In this incident, the crane operator lost sight of the victim when he was behind a large concrete slab. Visibility from the raised operator’s cab is generally good, but there are a number of blind spots and visibility can be blocked by suspended loads and straddled objects. NJ FACE recommends that the employer consider installing devices that would allow greater visibility, such as parabolic mirrors and/or video cameras whose images are shown in the operator’s cab. The crane’s manufacturer should be contacted to see if they recommend any specific devices and to discuss any proposed methods, as the employer noted that maintaining these devices may be difficult and hazardous (e.g., climbing the crane’s superstructure to clean a video camera). Other devices such as proximity detectors that sense objects near the wheels should be explored.

Discussion: To prevent incidents such as this, NJ FACE recommends that employers conduct a job hazard analysis of all work areas and job tasks with the employees. A job hazard analysis should begin by reviewing the work activities that the employee is responsible for and the equipment that is needed. Each task is further examined for mechanical, electrical, chemical, or any other hazard the worker may encounter. The results of the analysis can be used to design or modify a written employee job description. Additional information on conducting a job hazard analysis is included in the Appendix.

It is extremely important that employers obtain accurate information on health, safety, and applicable OSHA standards. NJ FACE recommends the following sources of information which should help both employers and employees:

U.S. Department of Labor, OSHA
Federal OSHA will provide information on safety and health standards on request. OSHA has several offices in New Jersey that cover the following counties:

NJDOL Occupational Safety and Health On-Site Consultation Program
This program provides free advice to private businesses on improving safety and health in the workplace and complying with OSHA standards.