On October 31, a 69 year old male construction mason was fatally injured when he fell 22 feet through a scaffold which had collapsed. The scaffold collapsed when an approximately 1500 pound granite block tipped onto the scaffold. The victim had been overseeing the setting of the block by a 35-ton crane onto a seawall. When the sling was removed, the block tipped onto the wooden scaffold. Two co-workers jumped to adjacent scaffolds and were not injured. The victim fell through the hole made by the falling stone in the planks of the scaffold. He suffered severe head injuries in the fall and was assisted in breathing by a trained emergency medical technician on the site until the ambulance arrived. He was then transported to the local city emergency room where he died several hours later. The MA FACE Field Investigator concluded that to prevent similar future occurrences, employers should:

On November 2, 1995, the MA FACE Program was notified through a newspaper article that on October 31, 1995, a 69 year old male construction mason was fatally injured when he fell 22 feet through a collapsing scaffold at a seawall construction site. An investigation was immediately initiated. The MA FACE Program Director interviewed the employer by telephone on November 6, 1995 and traveled to the jobsite on November 7, 1995. The police report, death certificate, corporate information, witness interviews and photographs were obtained during the course of the investigation.

The employer was a heavy construction contractor and was in business approximately 27 years at the time of the incident. Approximately 35 persons were employed as needed company-wide. Six employees were working at the incident site when the victim fell. Of these, only the victim was a mason, four were laborers, one was a crane man and one a supervisor. All but the supervisor were members of various trade unions. The company had designated the supervisor in charge of safety on the site, and had written safety procedures, although it did not have regularly scheduled safety meetings.

The victim was employed by the company since mid-August and had worked on the site approximately 6 weeks during the period from August to October. He was a highly trained and skilled mason/stonecutter with over 30 years experience in the trade.

On October 31, 1995, a crew of four laborers and a stonemason (the victim) were working inside a coffer dam building a granite stone seawall. This stone wall was being built to overlay a concrete wall. The granite served a decorative purpose as well as to mitigate the effects of salt water on the concrete wall. The wall was approximately 35 feet high and extended for hundreds of feet. The seawall was being relocated to accommodate changes in utility tunnels due to a major highway construction project.

The granite blocks were approximately 18 inches by 18 inches square and ranged from 2 to 4 feet in length. The victim would decide which length stone needed to be placed in order to create the correct pattern on the wall. The blocks were located in a staging area approximately 100 feet from the work area. The selected block would be strapped by a laborer in the staging area on ground level and lifted by 35 ton crane to the work area, located within a coffer dam erected to keep the sea water out. This meant that the crane man was not able to see where the block was placed but was given hand signals by a laborer stationed at the top of the concrete wall.

Scaffolding had been erected per the specifications of the victim. The scaffold was constructed of metal brackets secured to the block wall and 2″ x 10″ wooden planks. Guardrails were nailed in place all along the scaffold.

The victim supervised the arrangement and placement of the granite blocks. The block would be lifted over the concrete wall and lowered by crane onto the block wall where the victim and the laborers waited. The block would be placed onto a bed of mortar and supported by wooden shims which would later be removed. The wooden shims were various sizes ranging from small wedges to 2″ by 4″ pieces of wood. A long crow bar was used to manipulate the block into position. The block was trued to a snap line both horizontally and vertically. When the block was nearly in place, one laborer would remove the end of the sling from the crane hook, pull the sling through the eye and return the end of the sling onto the crane hook. This would remove the choker hitch, and the sling would be around the block with one end free. He would then signal to the other laborer, who was stationed above him on the wall, that the sling was ready to go. The crane would then be used to pull the sling from under the block and return to the staging area for another block. The laborers standing on the block wall and the scaffolding would then continue to maneuver the block into the proper position.

At the time of the incident, the crane was removing the sling from around the block. The sling hung up on the approximately 4 foot long block causing the block to tip onto the scaffold planks. The planks broke and the victim who was standing on them fell through to the concrete below, approximately 22 feet. Two laborers on either side of the victim jumped to adjacent scaffolds and did not fall. The victim suffered severe head injuries in the fall and was assisted in breathing by a trained emergency medical technician on the site until the ambulance arrived. He was then transported to the local city emergency room where he died several hours later.

Several days later a new scaffold was built, and the employer installed a static line and fall protection equipment on the job. This system supplemented the scaffold and guardrail arrangement. The employer also established use of a radio by a laborer to communicate with the crane man from inside the cofferdam. This measure enabled the laborer working with the craneman to have a direct view of the landing of the block and reduce the number of people the information needed to go through.

The medical examiner listed the cause of death as multiple comminuted skull fractures resulting from acute subdermal hematoma resulting from head trauma.

Recommendation #1: Employers should ensure that slings are removed by hand, not with the use of the crane.

Discussion: Granite block weighs approximately 165 lbs./cu. ft. which meant that the blocks in use at this job ranged from 750 lbs. to 1500 lbs. each. When pulling the sling out from around the block by hand, the sling may catch a bit and then come out with some physical effort. It is therefore easier to let the crane pull the sling out. The crane however is so strong that there is no resistance when the slings is substantially hung up on the block. Therefore, in this case, the crane was able to tip the block over when it pulled out the sling. If the workers had attempted to pull the sling out by hand, they may have realized that the block was resting on the sling and placed another shim under the block to free the sling.

Recommendation #2: Employers should consider the use of fall protection systems wherever there exists a possibility of overloading the scaffold system

Discussion: Although the scaffold system, which includes the braces, planks and guardrails, may have been sufficient for the men working on it, it was never intended to contain the load presented by the falling granite block. A thorough hazard analysis of the job would have revealed the possibility of a block falling. It would be unreasonable to construct the entire scaffold to hold that kind of weight. However, it was possible to supplement the scaffold system by installing and using fall protection equipment.

Recommendation #3: Employers should develop, implement, and enforce a comprehensive safety program that includes, but is not limited to, a thorough hazard analysis and utilization of controls particular to the job.

Discussion: Employers, with the participation of employees, should develop, implement, and enforce a comprehensive safety program. The program should begin with an analysis of hazards associated with the specific tasks to be done on the job. It should also include the identification and implementation of controls for those hazards. All employees should be trained in the recognition of hazards and the implementation of controls. Controls can include changes in procedures, changes in equipment or use of personal protective equipment.

In this case, a thorough hazard analysis would have identified that the sling could and does get caught on the block and that pulling it with the crane could cause the block to fall. Controls for that hazard would include pulling out the sling by hand or using fall protection equipment in case a block did fall. Employee involvement in recognizing hazards and suggesting controls will often result in better implementation of controls on site and a safer workplace. 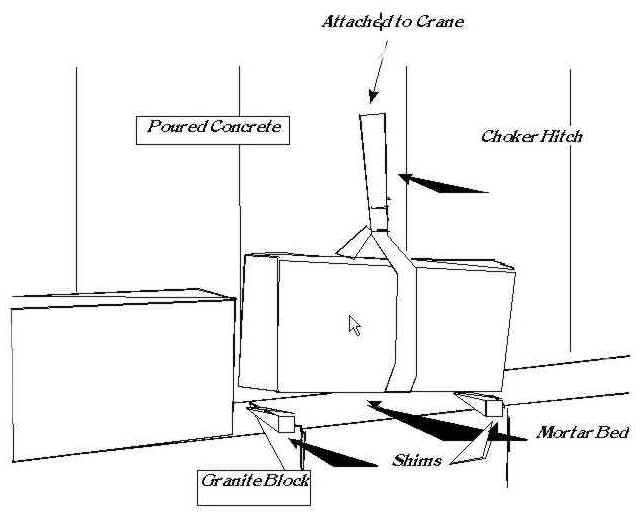