Construction Laborer Killed After A Backhoe Slid into an ExcavationMassachusetts

On September 28, 2000, a 21-year-old male construction laborer (the victim) was fatally injured when he was struck by a backhoe while working inside an excavation. The victim was operating a gas-powered compactor with his back towards the backhoe. The operator had been repositioning the backhoe when the backhoe slid into the excavation striking the victim in the head and back. Co-workers, who witnessed the incident, immediately called for emergency assistance and tried to help the victim. The victim was freed from underneath the bucket and CPR (cardiopulmonary resuscitation) and first aid were administered. Emergency medical personnel arrived within minutes of the telephone call and the victim was pronounced dead at the construction site. The Massachusetts FACE Program concluded that to prevent similar occurrences in the future, employers should:

On September 29, 2000, the Massachusetts FACE Program was notified by a the Occupational Safety and Health Administration (OSHA) through the 24-hour Occupational Fatality Hotline, that on September 28, 2000, a 21-year-old male construction laborer was fatally injured when a backhoe fell into the excavation in which he was working. An investigation was immediately initiated. On October 26, 2000, the Massachusetts FACE Program Director traveled to the job site where the victim’s employer was interviewed. The police report, death certificate, corporate information and OSHA fatality/catastrophe report were obtained during the course of the investigation.

The victim’s employer, one of two subcontractors onsite the day of the incident, had been in business approximately five years. The employer, a small contractor, employed four people, three of whom were onsite. Two other individuals were present at the time of the incident, a representative from the general contractor and the backhoe operator; the second subcontractor. The employer did not have written safety procedures or a health and safety plan but did have a booklet about construction safety given to him from his insurance agency, which he had with him on the day of the investigation. The project’s general contractor had a comprehensive health and safety plan and held regular on site toolbox safety meetings.

The victim had been employed with the company for approximately 6 weeks at the time of his death. It was reported that he had over one year of experience as a front-end loader operator. The victim’s construction laborer training with this company was on-the-job. The employees of the victim’s company, including the victim, were not represented by a union.

The victim’s employer specialized in renovations and small additions and was hired to complete some demolition, foundation work, and framing of a new addition for a commercial building. The company had been onsite approximately one month performing the demolition and foundation work.

During the foundation work, some “peat type” soil was discovered and the project architect requested that the soil be removed and replaced with “suitable fill”. The general contractor hired a second subcontractor, the backhoe operator, to perform this additional excavation work.

On the day of the incident, the onsite construction crew consisted of three employees from the victim’s employer, one employee from the general contractor, and one employee from the excavation subcontractor. The same configuration of workers were located inside the excavation spreading the fill as described above for the day before. The backhoe operator was positioning the backhoe near the excavation edge in preparation to empty a load of new fill into the excavation. It had been reported that the operator had stopped the backhoe after the rear wheels passed over the protruding section of old foundation, did not put down the stabilizers and did not engage the parking brake.

Occupants of the existing building heard the commotion and placed a call for emergency assistance. The construction crew members with help from the building occupants began to dig the victim out from underneath the bucket. Emergency medical personnel arrived within minutes of the call and immediately administered first aid and CPR (cardiopulmonary resuscitation). The victim was pronounced dead at the construction site.

Recommendation #1: Employers should ensure employees are not inside excavations while construction equipment is in close range to the excavation edge.

Discussion: When mobile equipment is being operated in close proximity (within two feet) to the excavation edge (including equipment being driven by an excavation edge) the employer should ensure that all employees, both their own and subcontractors, are outside of the excavation. (29CFR1926.651).

Recommendation #2: Employers should have a competent person conduct daily site inspections of excavations.

Discussion: The incident occurred on the second day of back filling an excavation with a backhoe while workers were inside the excavation spreading and compacting new fill. During excavation work, OSHA requires that a competent person must be on site to conduct daily site inspections (29CFR1926.651). 1 OSHA defines a person who is competent in excavations on construction sites as:

“one who is capable of identifying existing and predictable hazards in the surroundings, or working conditions which are unsanitary, hazardous, or dangerous to employees and who has authorization to take prompt correction measures to eliminate them.”

In addition, a competent person must conduct inspections of the adjacent areas, and protective systems for evidence of a situation that could result in possible cave-ins, hazardous atmospheres, or other hazardous conditions, such as equipment located at the excavation edge while workers are inside the excavation.

Recommendation #3: Employers should ensure that employees and operators receive health and safety training.

In this case, it was reported that the backhoe’s parking brake was not engaged and the stabilizers were not lowered to the ground. Following the above steps and the manufacturer’s recommendations for the proper procedure to follow when stopping a backhoe would have reduced the possibility of the backhoe falling unexpectantly into the excavation.

Recommendation #4: Employers should implement a warning system at excavation edges to help minimize injuries to workers from mobile equipment falling into excavations.

Recommendation #5: Employers should develop, implement and enforce a comprehensive health and safety plan that includes hazards associated with excavations.

In this case, the employer was a small contractor that, on average, employed four people, did not have a written comprehensive health and safety program, and did not supply employee training. The National Institute for Occupational Safety and Health (NIOSH) has a recent publication “Safety and Health Resource Guide for Small Businesses” available on their web site at www.cdc.gov/niosh/ (Link updated 3/27/2013) (publication number 2000-148). OSHA also has health and safety information for small businesses also available on their web site at www.osha.govexternal icon. Both of these publications are geared towards small businesses and supply valuable health and safety information. In addition, a summary of OSHA’s draft proposed safety and health program rule, which has a section on multi-employer work sites, has been included at the end of this report. 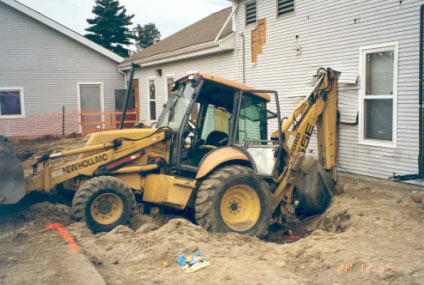 Figure 1 – Backhoe inside the excavation 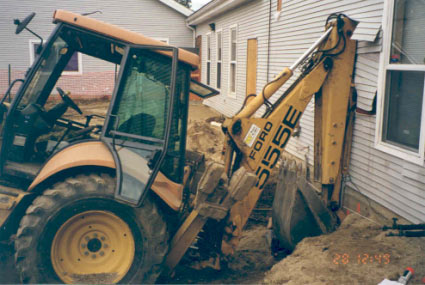