At approximately 8:30 am on April 16, 2003, a 48-year-old male (decedent) highway construction laborer working in an interstate highway median, died when he was struck by an out-of-control double trailer (a semi-truck pulling two trailers). The laborer was speaking with the job foreman and another laborer in the median next to a grading machine. As the decedent looked toward the traffic, he saw a double trailer traveling on the right-hand shoulder swerve into the left-hand lane and drive into the median where all three men were standing. He told the other two to get out of the way as he himself tried to do. The double trailer hit the victim, who died at the scene from multiple blunt force injuries.

To prevent similar incidents in the future from occurring, the following recommendations have
been made:

On April 16, 2003, via radio announcement, the KY FACE program became aware of an occupational fatality involving a highway construction worker and a semi-tractor trailer. A site visit was made on July 1, 2003. A company representative was interviewed and photographs and measurements were taken at the scene. The coroner involved was also interviewed.

A privately owned highway construction company that started in 1938 built roads, conducted road repairs and performed other highway construction work by government contract bid. In 1950, the company incorporated and, as of 2003, currently employed 150 to 300 workers, including 25 year round employees. Company employees were recruited on an as-needed basis from local union shops.

A local union shop provided trained, skilled construction workers for this company and other companies in the area. Training provided to the union members included applicable safety training. Members received packets of safety information for each job assignment. The decedent was a union member and had been union-trained to operate heavy equipment and to follow safety procedures.

The highway construction company conducted scheduled safety training sessions as well. The job foremen and the safety director held weekly toolbox talks and onsite safety meetings were held to identify and discuss site specific hazards and how to work safely in work zones.

Traffic barrels and warning signs were in place as specified by the Manual Of Uniform Traffic Control Devices (MUTCD) to alert drivers of the roadwork ahead and to proceed with caution. The posted speed limit was 55 miles per hour; 10 mph slower then the normal 65 mph speed limit. Vehicles were diverted from the normal 12-foot-wide driving lanes to use the shoulder lane as the right-hand driving lane and the usual right-hand lane was used as the left-hand driving lane. The shoulder lane was comprised of 10 feet ¾ inches of concrete plus 2 feet of gravel,
making a total shoulder width of 12 feet ¾ inches.

On the median side of the interstate, concrete barrier walls used to isolate workers in the median had been removed to “dress” the median. According to Kentucky Department of Transportation, it was common practice to remove the barrier walls after the main road construction was completed and before the final grading and seeding work of the median was performed.

Work had commenced that day at 7:00 am and was scheduled to end at 3:30 pm. At 8:30 am, the job foreman and the two laborers were standing in the middle of the median next to a grading machine. Behind the grader was a bulldozer and a heavy-duty pickup truck was parked in the median parallel to the left east-bound traffic lane.

At this time, an east-bound double trailer was traveling in the right shoulder lane at 55 mph when the passenger side tires of the second trailer left the pavement onto the gravel portion of the shoulder. The tractor trailer jackknifed, crossed the right and left interstate lanes into the median, hit the heavy-duty pickup truck and headed to where the workmen were standing. As the semi-tractor trailer twisted onto its left side, damaging the pickup truck, it traveled toward the grader where the three men were standing. As the decedent saw the semi-tractor trailer lose control, he told the other two men to get out of the way and tried to do the same himself. The foreman dove under the grader, while the other two laborers attempted to run out of the path of the semi. Both laborers were hit by the semi. The foreman scrambled from under the grader, ran to both laborers who were lying on the ground in the median, retrieved his cell phone and contacted the company office to call emergency medical services to the scene. A man in a passenger vehicle traveling from the opposite direction stopped and parked his vehicle. He took a blanket from his vehicle and used it to cover the deceased laborer. Life squad emergency services arrived and immediately contacted the local coroner to come to the scene. The surviving laborer, in critical condition, was airlifted to a local hospital. Several witnesses to the incident also called emergency services. The decedent died at the scene due to multiple blunt force injuries. No charges were brought against the driver of the semi-tractor trailer.

The cause of death was due to multiple blunt force injuries.

Recommendation No.1: Positive barriers should be used in all interstate work areas during all phases of the job contract work periods to protect workers from vehicles in traffic lanes.

Positive barriers should be used in all interstate work areas during all phases of the job contract work periods to protect workers from vehicles in traffic lanes. According to the Kentucky Department of Transportation, Division of Highway Design, positive barriers were not required to protect workers in the work zone for the work being performed. Had positive barriers such as concrete barriers been in place, the path of the out-of-control semi-tractor trailer could have possibly been diverted away from the workers. It is suggested that appropriate barriers be used until the entire job is
completed.

Recommendation No.2: Speed limits in highway work zones should be reduced and enforced according to the
type of work performed and temporary roadway surfaces being utilized.

Recommendation No.3: Semi trailers should be equipped with an anti-lock breaking system (ABS) and tractor trailer drivers should be given defensive driving courses with ABS system operation.

The driver’s ability to stop a jack-knife situation is more difficult when hauling more than one trailer. The physics of a double jack-knifing is similar to a whipping action. Movement in the front tractor is amplified as the energy moves to the rear of the second trailer. 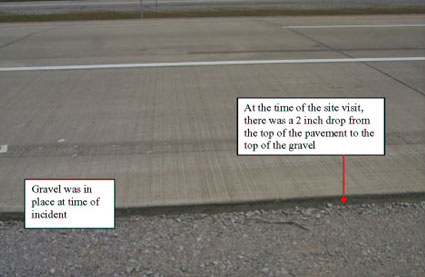 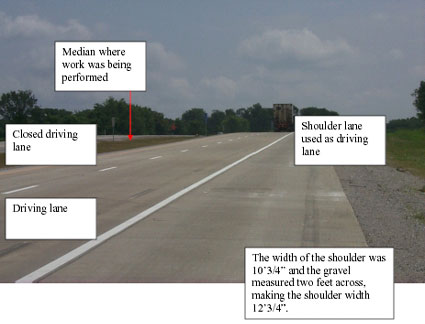 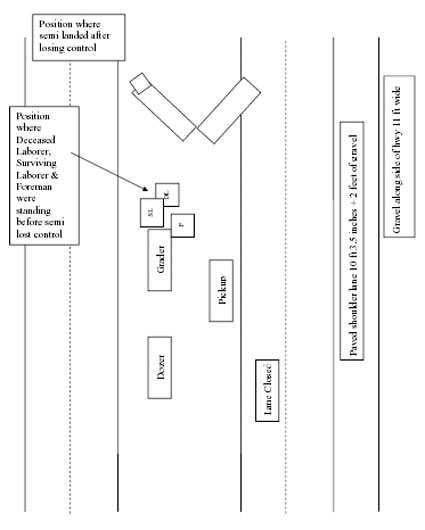