On August 12, 2002, at 6:40 pm, a Chinese immigrant restaurant owner (decedent) died after being electrocuted by 110 volts of electricity. The restaurant owner and his wife were refurbishing a restaurant they had recently purchased. They spent the day cleaning the kitchen area while waiting for a washing machine repairman to arrive. Earlier in the day, the decedent had removed the electric cord to a single door, glass-fronted vertical cooler on rollers. He replaced the electrical cord from the unit with an electrical cord he had fabricated himself by attaching one end of a 10 foot length of 10/2 wire to the cooler and the other end to one-foot length of extension cord which plugged into the wall receptacle. The unit was moved around the kitchen all day while the kitchen was cleaned. The ground wire on the 10/2 length of wire came loose and came in contact with the metal frame of the cooler. The owner then moved the cooler eight to twelve inches cattycorner to a gas cook stove. The owner, who was hot, sweaty and shirtless bent down between the cook stove and the cooler. As he did so, his chest touched the outside aluminum casing of the cooler as his back touched the metal stove. He was electrocuted when the electric current traveled from the cooler through him to ground through the stove.

KY FACE was notified of the incident on February 6, 2003 by a Kentucky state agency. Accompanied by the local electrical codes inspector, the KY FACE evaluator made a site visit on May 22, 2003. The local electrical codes inspector and a brother of the deceased were interviewed. A local coroner was interviewed by telephone previous to the site visit. It is unknown how much electrical training and experience the decedent had prior to the incident.

On August 12, 2002, a married Chinese immigrant couple were in the process of refurbishing a restaurant they had recently purchased. They spent the day cleaning the kitchen area while waiting for a washing machine repairman to arrive.

There was a single door, glass-fronted cooler on rollers by the door of the kitchen entering into the dining area of the restaurant. The restaurant owner wanted to be able to move the cooler around the kitchen to keep it out of the way as they cleaned. The electrical cord to the cooler was not long enough to allow much mobility of the cooler and have it remain plugged into the wall. In order to increase the distance the cooler could be moved and still remain plugged into the wall, the restaurant owner replaced the electrical cord of the unit with a self-fabricated extension cord composed of a 10 foot length of 10/2 wire and a one foot length of extension cord. The decedent wired the 10/2 wire to the electrical panel in the back of the cooler and spliced the other end into one foot of extension cord. He wrapped the spliced area with electrical tape then plugged the unit into the wall receptacle. During the course of the day, the man and his wife moved the cooler to different locations around the kitchen. The first time the cooler was moved, it felt normal to the touch. However, subsequent to the initial move, each person moving the cooler felt a slight tingling to their hands when they touched the metal frame. The ground wire had detached from its connection to the electrical panel inside the cooler. The exposed ground came into contact with the metal side of the cooler. This energized the outside of the cooler.

By evening, the unit had been moved approximately eight to twelve inches cattycorner to a gas cook stove. The restaurant owner who was hot, sweaty and shirtless bent down between the cook stove and the cooler. As he did so, his chest touched the outside aluminum casing of the cooler and his back touched the metal stove. He was electrocuted as the electric current traveled from the cooler through him to ground through the stove.

His wife administered cardiopulmonary rescusitation, however she could not revive him. She called 911 emergency services. They arrived to the scene within minutes of being notified and administered life support. The decedent was transported to a local hospital where he was pronounced dead by the coroner.

The local electrical codes inspector went to the scene and investigated this incident. During the interview, he said the wiring connections to the unit and the splices were made correctly but the restaurant owner had used inappropriate material to fabricate the extension cord. The 10/2 wire was too rigid for the application the decedent used it for.

The death certificate lists the cause of death as electrocution.

Recommendation No. 1: Perform a hazard evaluation at work site before any work is commenced.

Discussion: A hazard evaluation should be conducted of any worksite.

Recommendation No. 2: Only persons properly trained in electrical procedures should perform electrical services.

Discussion: The wire the decedent chose to use to fabricate the extension cord is very rigid and does not allow flexibility in movement. The stiffness of the wire caused the connection to fail and the wire to become loose and touch the metal frame of the cooler. It is unknown why he chose 10/2 wire instead of a more flexible wire to fabricate the extension cord. Also unknown is why the decedent chose not to plug the existing cord into an approved extension cord to lengthen the existing cord. 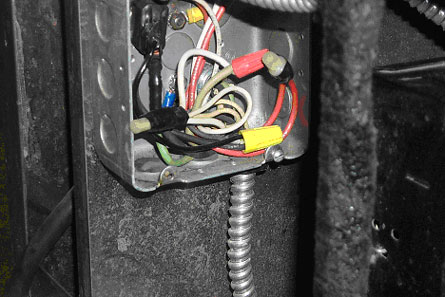 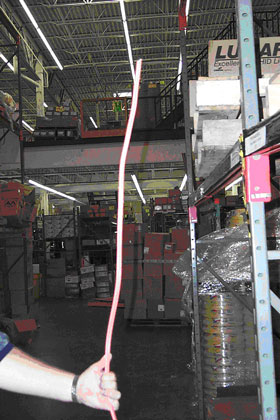 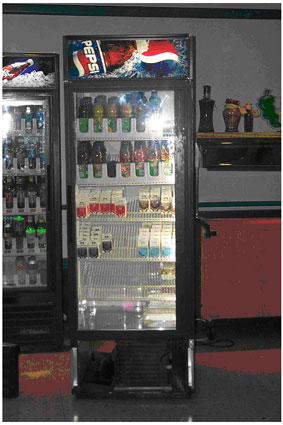 Cooler similar to the one in the restaurant.